No Comments
Read on
Bio-based raw materials already exist and they are emerging. Especially in construction, it is no longer necessary to work with fossil, environmentally damaging materials that are also becoming scarce. This is something they know like no other at the Biobased Innovation Garden in Zeeland (The Netherlands). Since 2014, they have been working on the cultivation and application of plant-based materials: from flax to tobacco, from cotton to Russian dandelions. And still these do not end up in products on a massive scale. The real breakthrough is still a long time coming. That is why the Biobased Acceleration Day was organised on 5 July at the Rusthoeve Agricultural Innovation and Knowledge Centre. The central question: how can we get the market in motion?
Pierre Gielen

About 150 people visited the beautifully located research farm on the Oosterschelde estuary. On a bright and sunny day, they walked with a guide through the fields with promising crops such as bamboo, miscanthus, hemp or flax. They networked, listened to inspiring key-notes and participated in lively workshops on construction and chemistry. An extensive expo (the so-called ‘Acceleration Square’) showed a selection of biobased materials that are already ready for the market.

An ‘incubator of new ideas’, is how Cor van Oers (manager Delphy and project leader Biobased Innovation Garden) calls it. But there is still plenty to do. When you go to the hardware store to insulate your house, you will find all sorts of solutions, but no biobased insulation boards. And with a can of water-based paint, you will get plastic stirring rods. In the wardrobe, with some good will, you can find textiles made from natural raw materials, such as wool and cotton, but they are packed with fossil-based additives, such as softeners, flame retardants and dyes.

“When I look at the Acceleration Square, I already see many alternatives. We just need to get them into the shops. And we need to do it faster,” says Van Oers. According to him, arable farmers play a key role in this. “Without large-scale vegetable production, they will never succeed. But this will have to be matched by good prices: “at least the same as the yield of winter wheat.”

It is crucial to start scaling up innovations now and to create new, innovative chains, argued Willem Sederel, chairman of Circular Biobased Delta (CBBD). The transition to the use of more circular and bio-based raw materials is in fact badly needed to realise the ambition of reducing CO2 emissions by 10 megatons in the southern part of the Netherlands (the working area of the CBBD) by 2030, through concrete projects. The German nova Institute calculated that worldwide 450 billion tonnes of carbon are currently used annually for chemicals and materials, and the vast majority is of fossil origin. It can only be replaced by combining chemical recycling (especially gasification and pyrolysis) of waste plastics with the use of agricultural crops for e.g. sugars, glycerol, fats, lignin and biogas.

“I personally think that biobased feedstocks will play a much more significant role in chemistry than they do now, certainly because achieving sufficient CO2 reduction with chemical recycling alone is not that simple,” said Sederel. CBBD is therefore investing heavily in interesting programmes for the development of products from biorefinery, for example chemical building blocks from sugars (Sugar Delta, Biorizon) and bio-asphalt with lignin (CHAPLIN). For the latter project, Zeeland alone already has more than 25 trial areas with bio-asphalt in various compositions.

A company that is already investing fully and on a large scale in the biobased transition is Neste, the Finnish oil company that started in 1948 with heavily contaminated crude oil from Russia as its only raw material. Out of necessity, it developed innovative cleaning techniques. Neste was the first oil refinery in the world to produce lead-free petrol, and is now known for its sustainable fuels (renewable diesel, jet fuel) based on biobased residues, such as waste oils and fats from the food industry. And very successfully so. In addition to two refineries in Finland, the company also owns large production plants for biodiesel in Rotterdam and Singapore. The capacity of the latter two plants is being doubled: an investment totalling €3.3 billion. In California (US), Neste is also converting a complete traditional refinery to biobased, together with Marathon Petroleum; another investment of almost €1 billion.

“We do this for several parties worldwide, explained Frank Hendrickx, head of Feedstock & Production Platform Chemical Recycling at Neste during the Biobased Acceleration Day. “We are starting to supply the global petrochemical industry with renewable raw materials for new plastics and chemicals. The demand is enormous and will have doubled by 2040 compared to 2016. Everyone wants these feedstocks. So we do need to move to a circular system, where we no longer take carbon out of the earth.”

Neste therefore sees the chemical recycling of waste plastics as part of the solution. To this end, the company is building a thermochemical liquefaction plant for mixed waste plastics in the port of Vlissingen (part of North Sea Port in the Flanders/Zeeland region), together with the Belgian polymer recycler Ravago. The plant will initially process 55,000 tonnes of plastics per year, but by 2030 the annual capacity should have grown to 200,000 tonnes.

Sticking out the neck

In a number of workshops, participants in the Acceleration Day could discuss the developments and challenges in the construction industry and the chemical industry. One pressing question came to the fore: why doesn’t the (central) government take bigger and quicker steps to stimulate the market, for instance by offering financial support and making the use of more sustainable raw materials obligatory? The answer seems to be an unambitious government that is putting the hot potato off until the next government term. As a result, suppliers and service providers in the biobased field are dependent on ambitious frontrunners who dare to stick out their necks.

One such frontrunner with guts is famous Dutch meteorologist and ‘weatherman’ Gerrit Hiemstra. He decided to build a climate-neutral biobased family home in the Northern Netherlands in 2019. Finding an architect and a construction company that were experienced in biobased construction was already a challenge. For the municipality, too, this was an unknown process. In the end, the house was completed after three years.

With hindsight, Hiemstra still recommended: “Just do it,” because it results in a comfortable house in which only minimal energy is needed for heating and cooling. He did add, however, that it is necessary for the government to provide guidance on biobased construction, by setting standards, but also by taking the lead: “For instance, by setting requirements for the materials with which a new neighbourhood may be built. Future residents should be well informed about what they can expect, because there is still too much uncertainty at the moment.” Standardisation and professionalisation are also necessary: “It is still too much of a niche, not mature enough yet. A lot still needs to happen in the value chain.”

This was also evident in the following panel discussion lead by Jo-Annes de Bat, member of the Zeeland Provincial Executive. Martijn van Sabben, managing director of Fraanje Building Company, noted that biobased construction is still slightly more expensive than traditional methods. Gerrit Hiemstra estimated that his house was 10 percent more expensive. “We have to make biobased building affordable for everyone,” said Van Sabben. “We can only do that by working together, sharing knowledge together and scaling up.”

According to André Hoogendijk, director of BO Akkerbouw, it is indeed necessary to make biobased construction standard in stead of an exception. He sees this as an interesting opportunity for farmers to add value to extensive cultivation. “It would be good to include hemp, flax and elephant grass in existing building plans, for example. It is good for the soil and for biodiversity. But there has to be some money in it for the farmer. We would like to create new chains for that, regionally or nationally.”

Such new crops also make it possible to sequester carbon for a longer period, which can provide the farmer with a modest extra source of income via ‘carbon credits’ in addition to the normal harvest yield, explained Teun Wiebold of aESTI.

There are plenty of possibilities. Taco Tuinhof, architect at Rothuizen Architects and Advisors, also thinks there are plenty of opportunities in serial construction. “For example, a local residents’ cooperative in Middelburg is going to renovate thousands of homes with glass wool and rock wool, when it could just as easily be done with flax or hemp. Moreover, I would like to transform a number of sad and industrial looking buildings with biobased materials. Because I think it can be done much more inspiring!”

This article was written in cooperation with Circular Biobased Delta 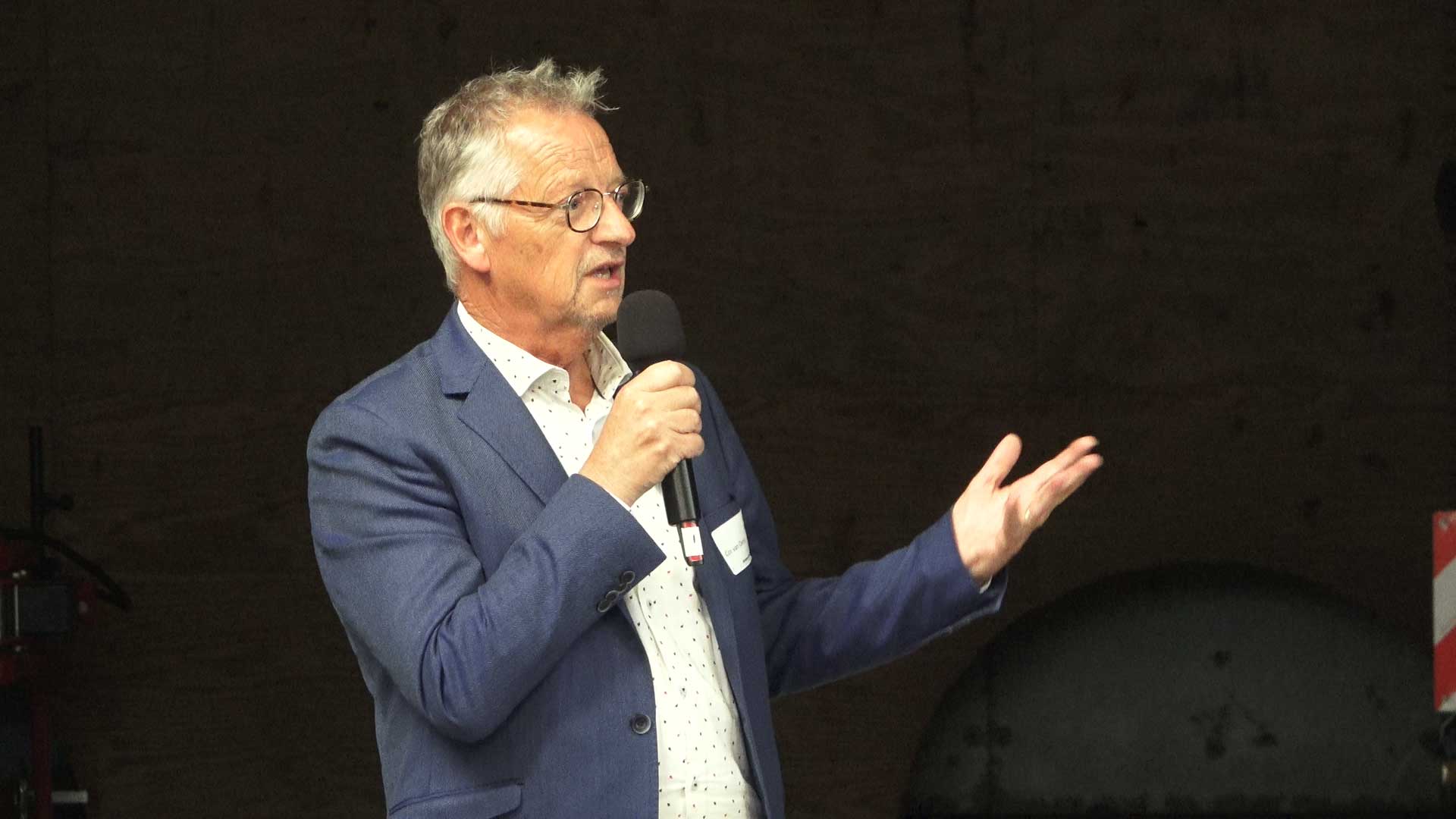 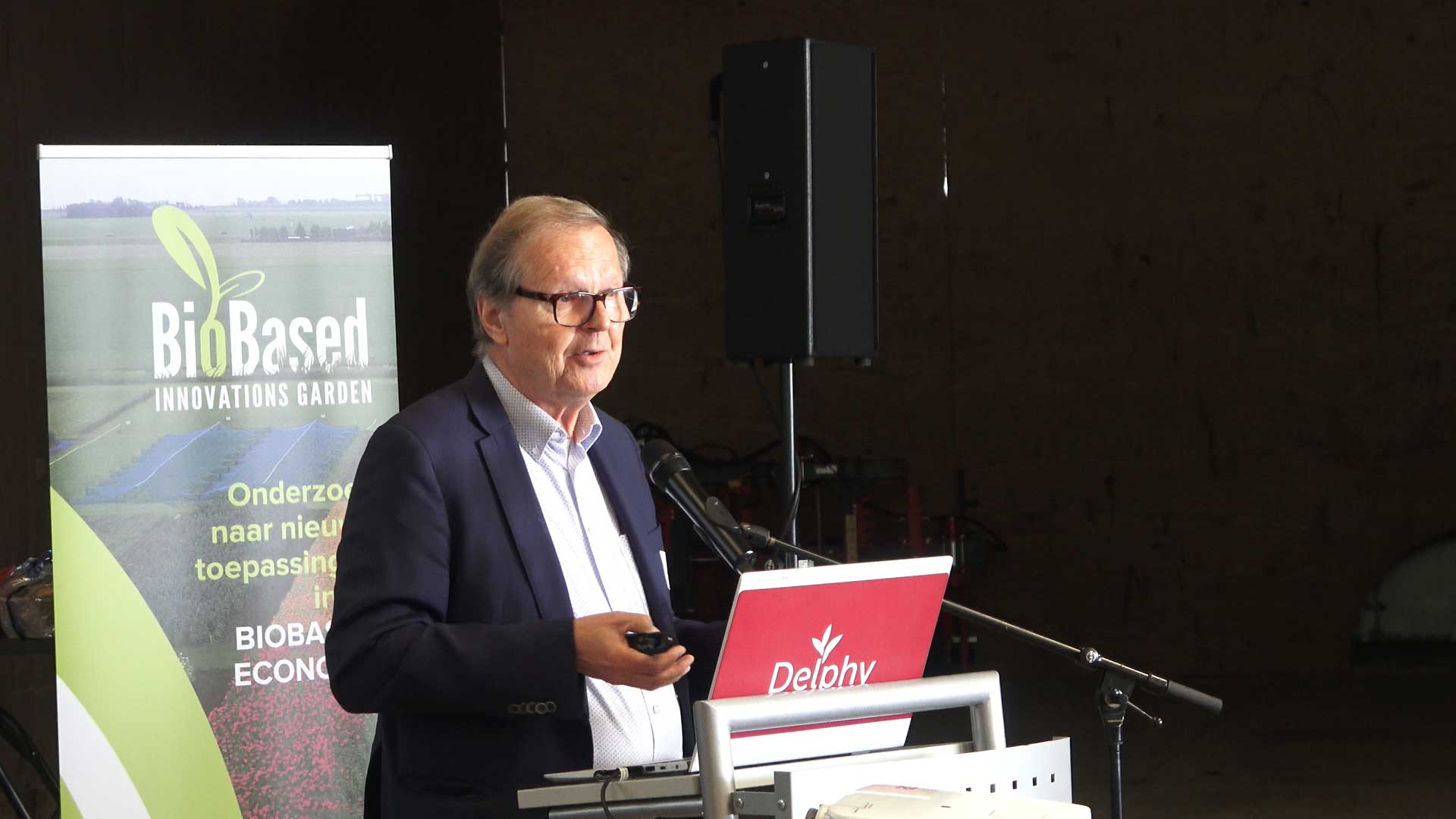 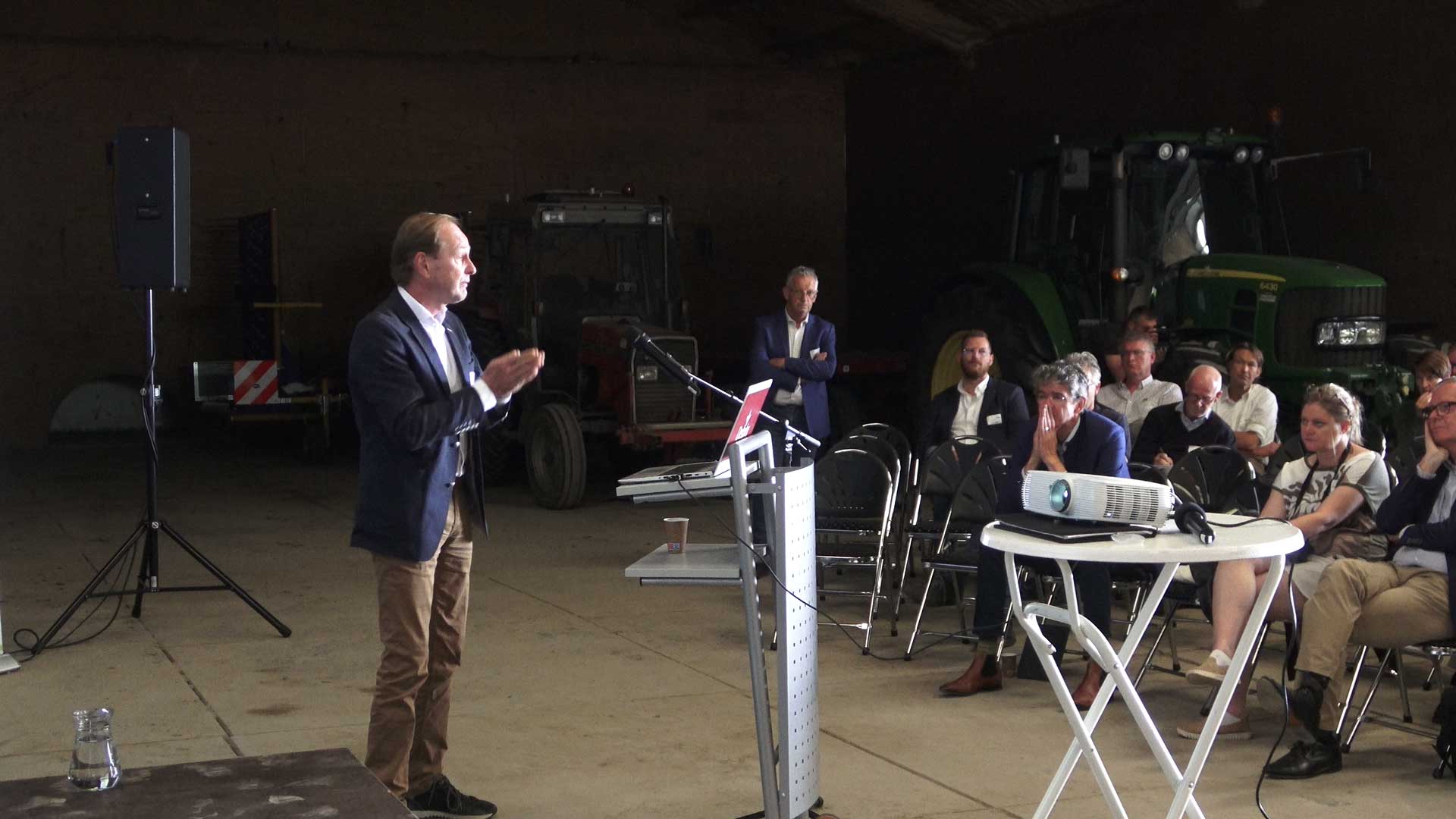 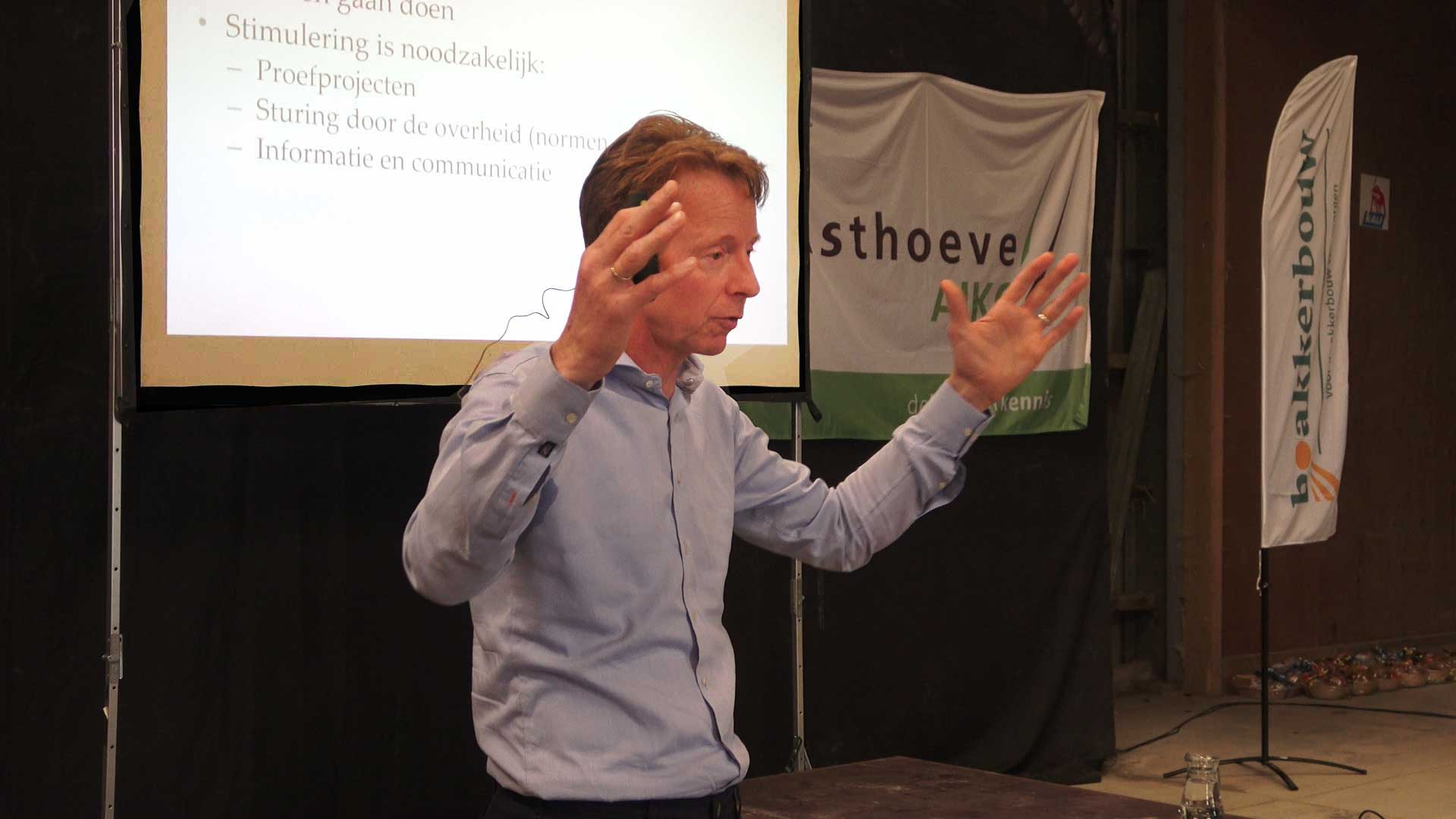 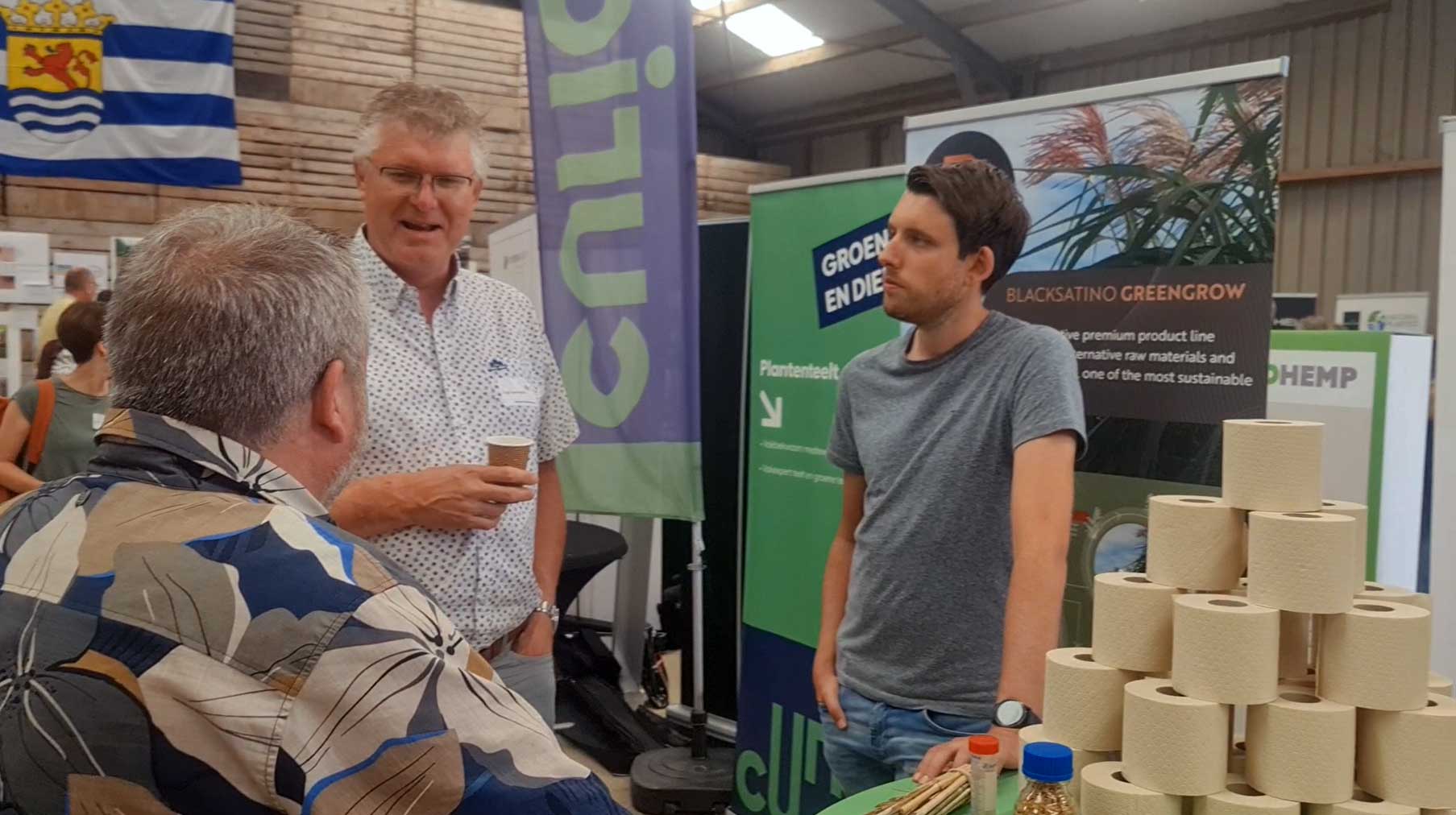 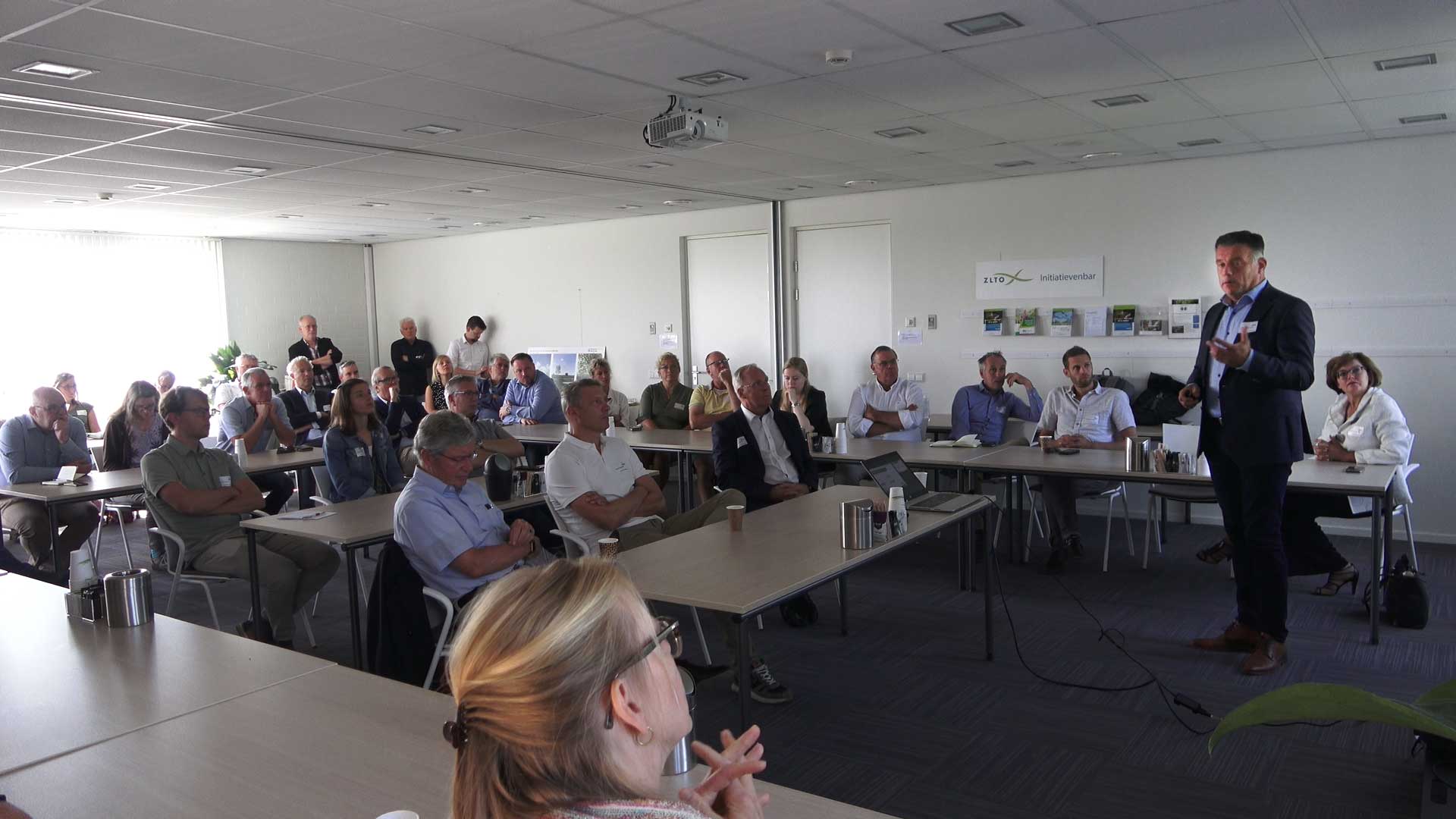 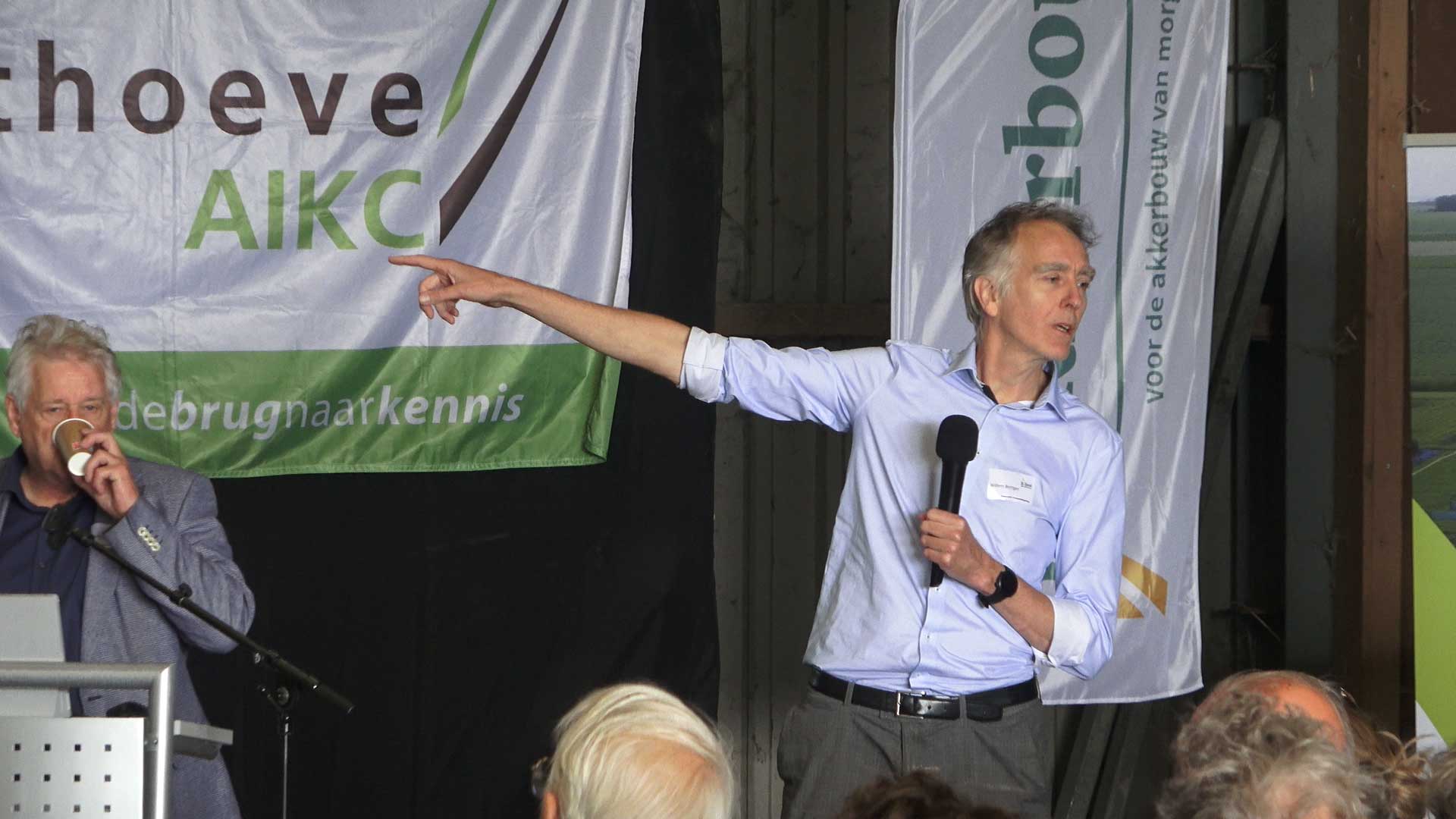 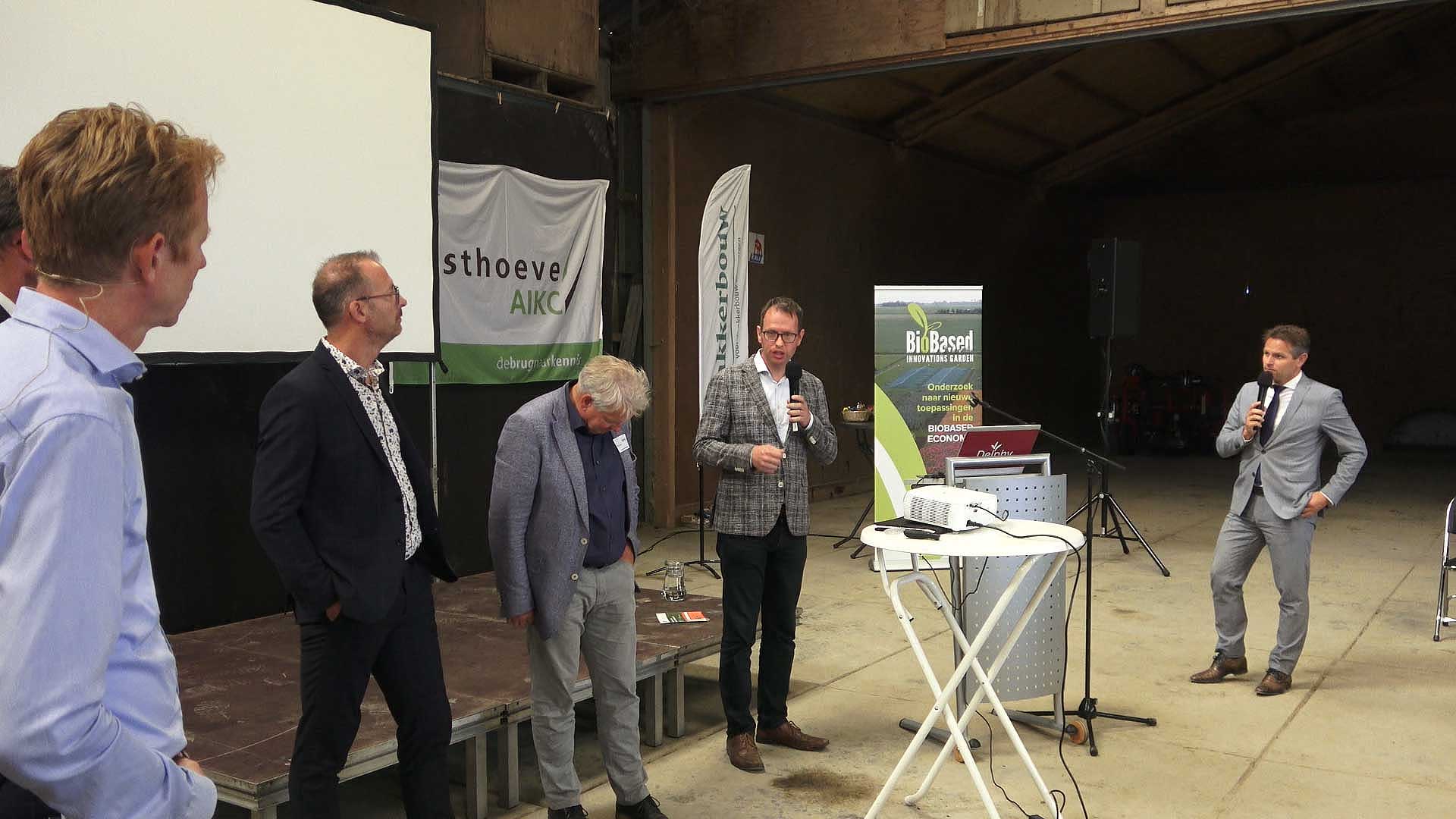 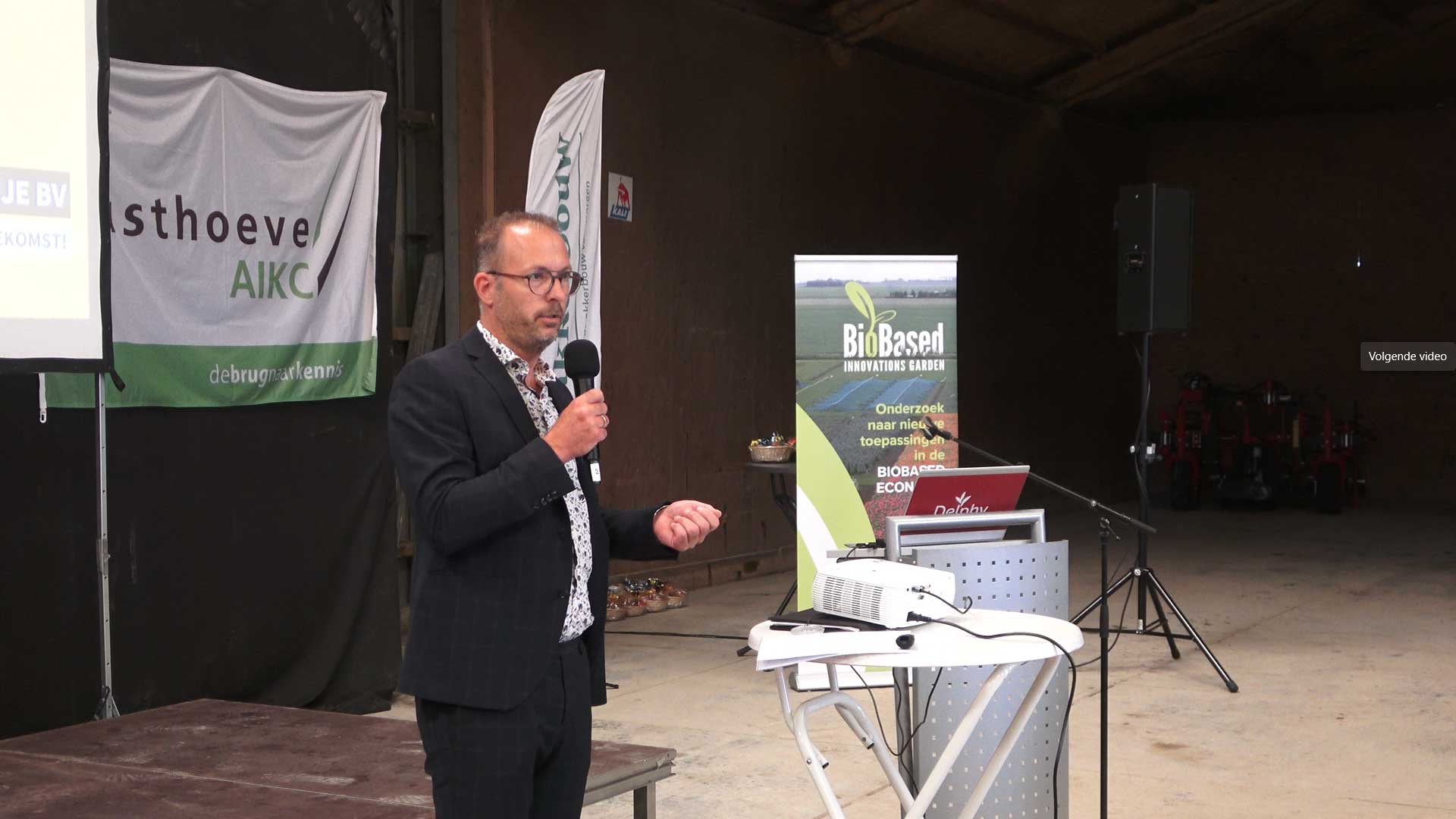 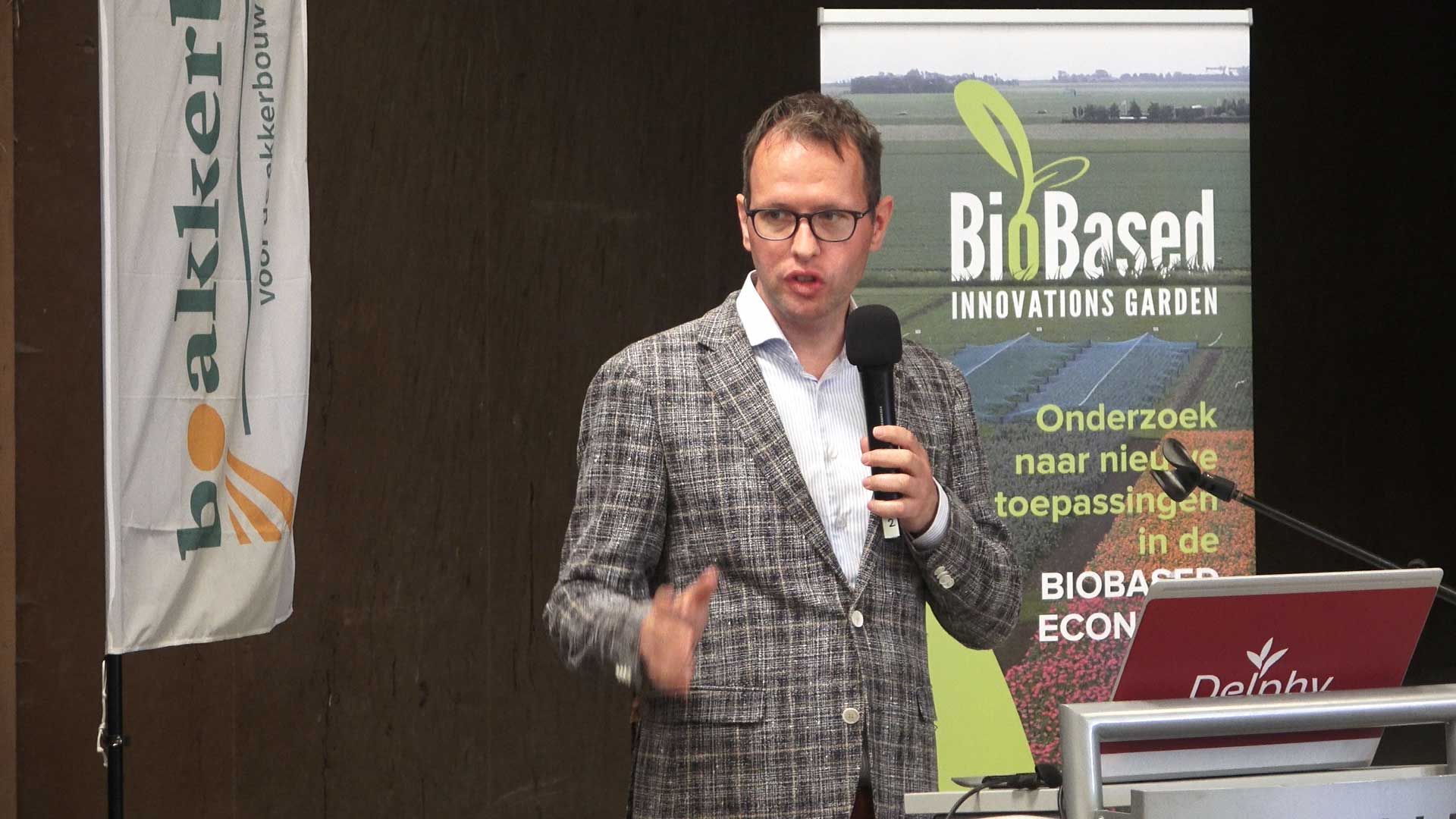 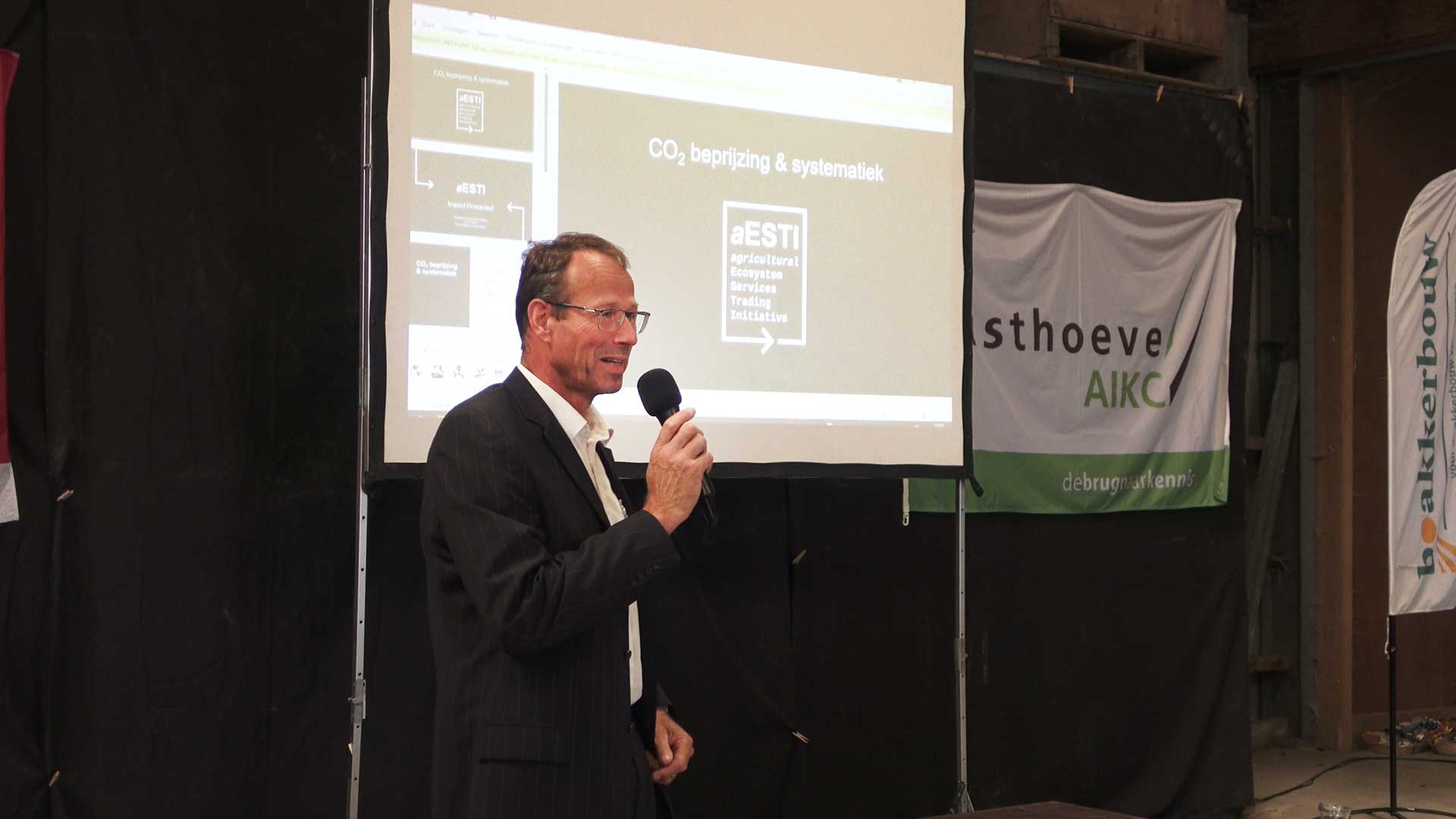 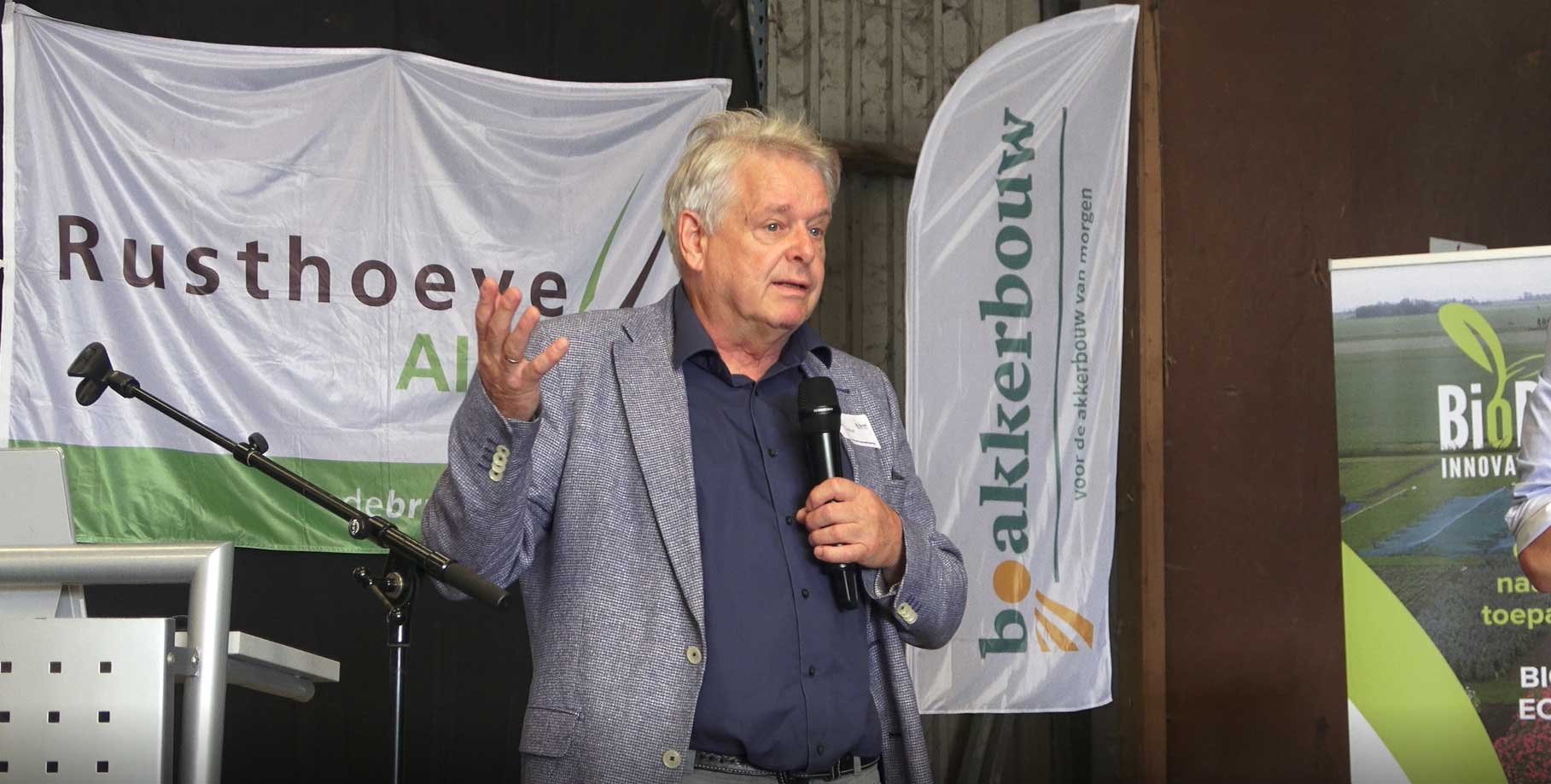 360 drone photo of the 'Rusthoeve'

2022 will be year of change for Circular Biobased Delta

In the new year, Circular Biobased Delta (CBBD) will enter a decisive phase: 2022 is to…