No Comments
Read on
With over 150 visitors, Biorizon Shared Research Centre’s annual event in Antwerp at the end of November was well-visited. The bio-aromatics event highlighted the upscaling efforts currently underway in the three research directions or ‘horizons’: the production of bio-aromatics from sugars, lignin and biomass residual flows (via pyrolysis and gasification).
Pierre Gielen

Many promising results have since been achieved in all horizons. Since the start-up in 2013, high-quality facilities have been added in the Flanders-Netherlands region, namely in Delft, Mol, Petten and at the Green Chemistry Campus in Bergen op Zoom. The annual budget has been increased from € 1 million to € 8.6 million, 19 patents have been awarded and 11 bio-aromatics are now available (in samples ranging from 1 to 10 kg), that can be used by industry for developing applications.

“This puts us on track in achieving our mission: commercial production of the first biobased molecules by 2025,” said Ludo Diels, Chairman of Biorizon’s Advisory Council. “Together with the chemical industry we are bringing aromatics on the market that are functional, renewable, competitive and safe. This not only concerns drop-ins, but also entirely new functional molecules and oligomers that are impossible or nearly impossible to make with traditional chemistry.”

The market appears to be increasingly ready to accept new production methods. For example, companies in Sweden and Finland are now investing millions in the construction of factories with Dutch Fast Pyrolysis technology developed by Twente University and BTG-BTL. Rui Amorim, New Technologies Business Manager at TechnipFMC, explained these projects during the Biorizon event.

The Swiss company Bloom is developing a different technology for the bulk production of chemicals from timber and agricultural residual flows. “In the past, cellulose was extracted from biomass using brute force, leaving an unusable mixture of lignin and hemicellulose behind,” Bloom’s CSO Jean Behaghel explained. “We apply a pretreatment using aldehyde making the three molecules easier to separate.” The result is a pure (non-condensed) lignin that can be reprocessed as feedstock for high-quality chemicals. Bloom is one of the potential users of the LignoValue project of Biorizon’s co-initiator VITO, whereby a pilot plant for the production of bio-aromatics will be constructed.

The company BioBTX uses thermochemical conversion combined with catalysis to produce the often used building blocks benzene, toluene and xylene (BTX) from a flexible supply of feedstocks: ranging from biomass to non-recyclable plastic waste. This process is characterised by high yields (40 to 60% on the basis of plastic waste) and a small ecological footprint, said Pieter Imhof, Managing Director of BioBTX. As a result, this is the first time there is a real alternative to fossil BTX. “This technology is key to making full circularity possible, precisely because it involves drop-in chemicals.”

The Japanese manufacturer of adhesives and mastics Kaneka by contrast is not specifically looking for biobased alternatives to fossil aromatics. “Such alternatives are more expensive and customers therefore only purchase these products when they offer additional functionality,” said Luc Peeters, R&D Manager at Kaneka Belgium. This company also likes to refer to the LignoValue project for supplying sufficient bio-aromatics and expanding applications. Initial trials demonstrate that the addition of lignin can improve the properties of adhesives and mastics, such as strength, viscosity, elasticity or hydrophoby. “The only way for this to be successful is if there is a sufficient availability of bio-aromatics. In addition, it would be helpful if the use of bio-polymers were to be stimulated through European regulations.”

The Flemish Lawter, a subsidiary of the Japanese Harima Chemicals Group, decided not to respond to market demand. The company voluntarily took the initiative of using lignin in sustainable ink for offset-printing companies. This ink was already largely made from biobased raw materials, such as fir tree resin, cardanol and linseed oil, although the toxic substance alkylphenol is required for the production process. “Thanks to the technology developed by KU Leuven and VITO’s fractioning process, we can replace this with lignin derivatives,” said Maarten Maessen, R&D Chemist at Lawter. “This makes our inks better recyclable.”

Biorizon has also made major leaps forward in the production of bio-aromatics from sugars. Roger Blokland of Biorizon’s co-initiator TNO spoke about the results of the pilot plant that is now in use at the Green Chemistry Campus in Bergen op Zoom. Research there did not first and foremost focus on bulk products, but on specialties with a higher added value. Such as hemimellitic acid (for use in PU, greasing agents and plasticisers) and various variants of anhydrides of phthalic acid (for UV-resistant coatings, plasticisers, epoxy curing agents and other innovative applications).

The availability of kilogram samples is an important milestone achieved in the sugar horizon in 2019. In total 22 kilograms of these samples were supplied to 10 different customers for evaluation. 7 pilot skids are in use for conversion and purification and 16 employees are working in this area. A total of € 14 million has been invested. Biorizon is currently making preparations for further upscaling to a commercial level. The still to be created Relement spinoff will be working on this.

The last part of the event was a panel discussion in which Session Chairman Joop Groen queried participants Rui Amorim, Jean Behaghel, Jan Van Havenbergh (Catalisti), Willem Sederel (Biobased Delta), Luc Peeters and Geert Reyniers (Worley). Famous last words of Jean Behaghel during this discussion: “We have to show the world that investing in biobased chemistry is a good decision.” 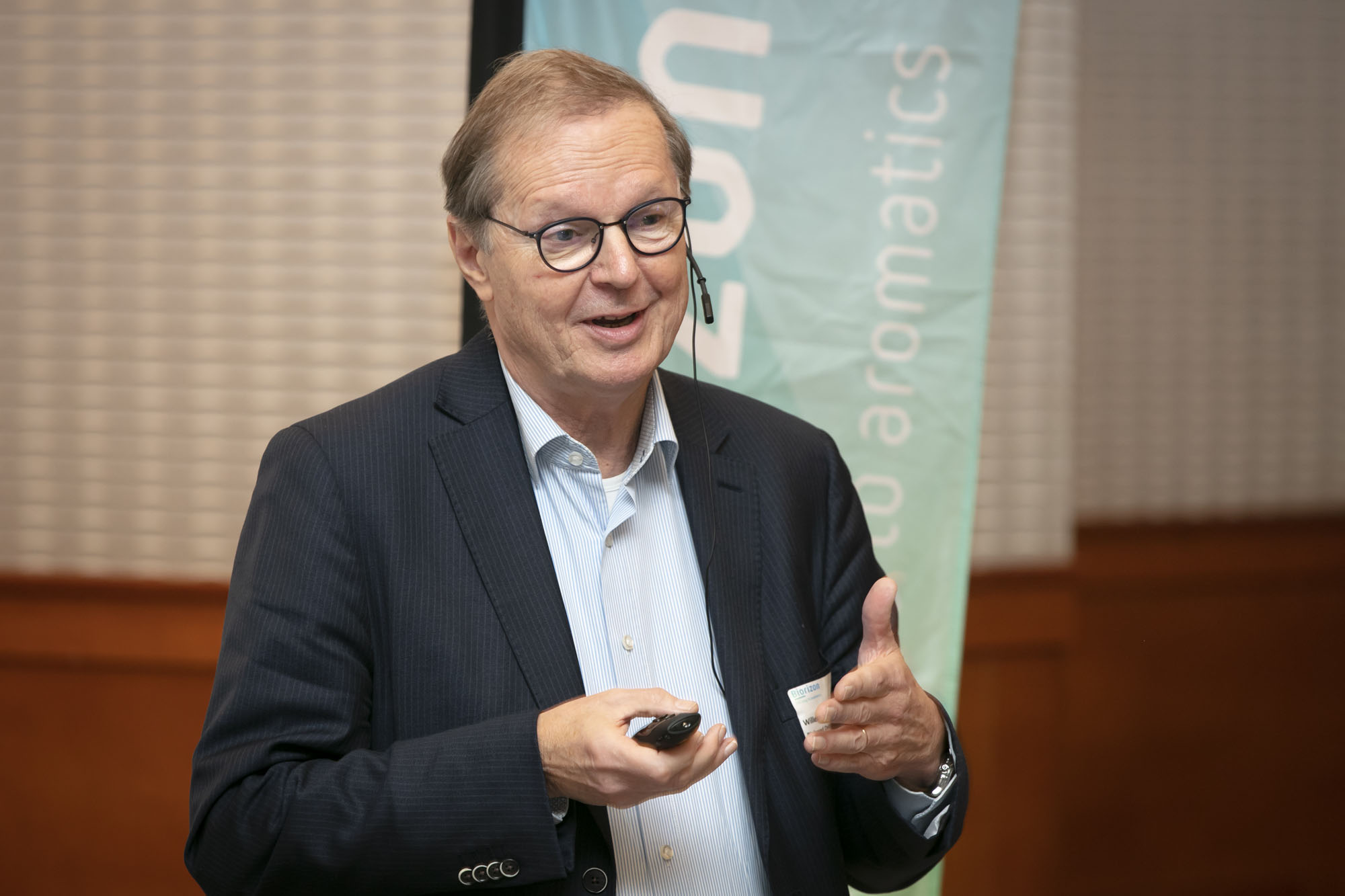 The spotlight in the BIOPEN open innovation platform fully is on bio-aromatics, said Willem Sederel (Biobased Delta) during the Biorizon Event. He called on participants to become a member of the platform. BIOPEN is focused on accelerating innovations and has an extensive database with patents, projects, grants and scientific publications at its disposal. 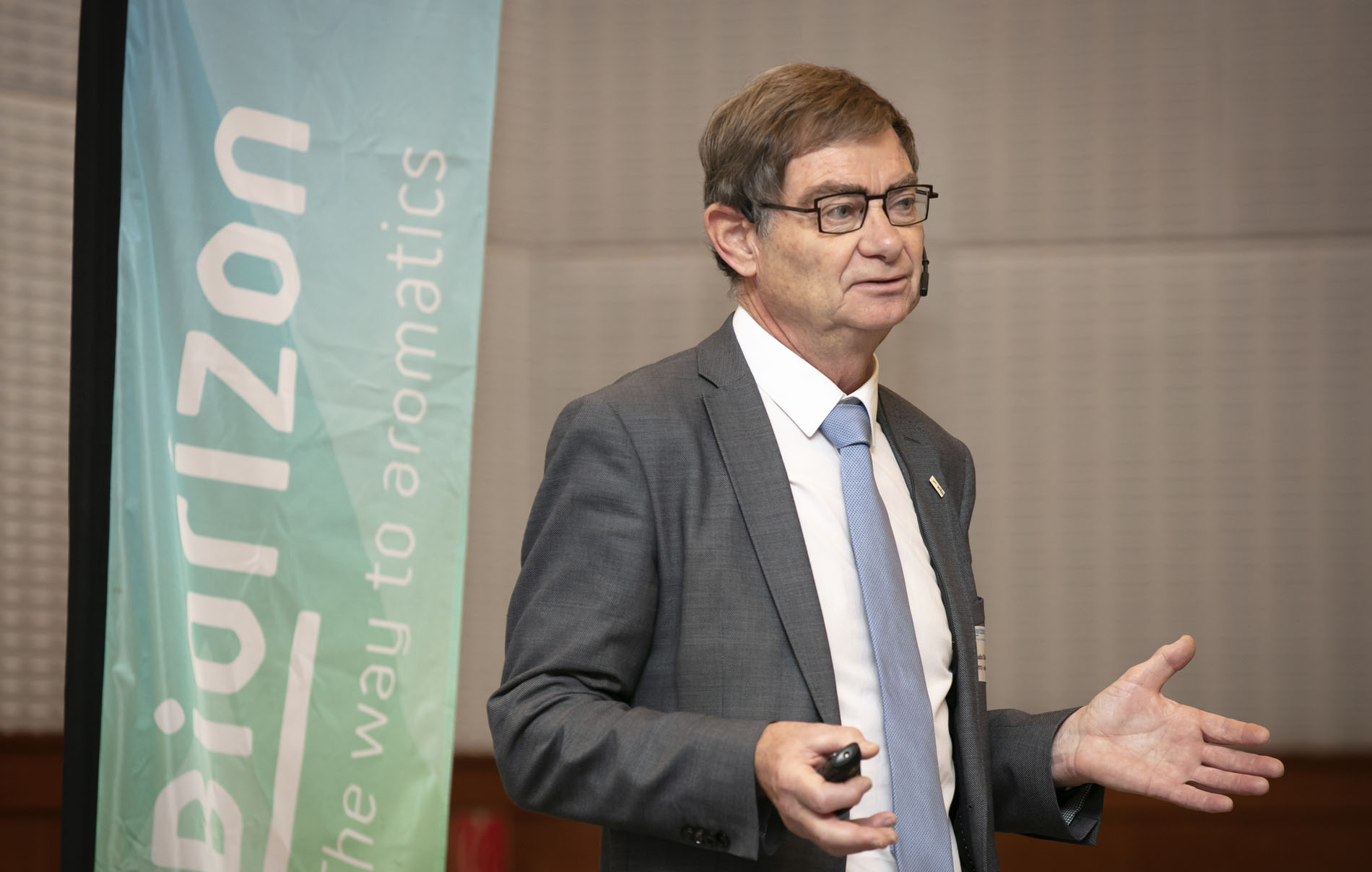 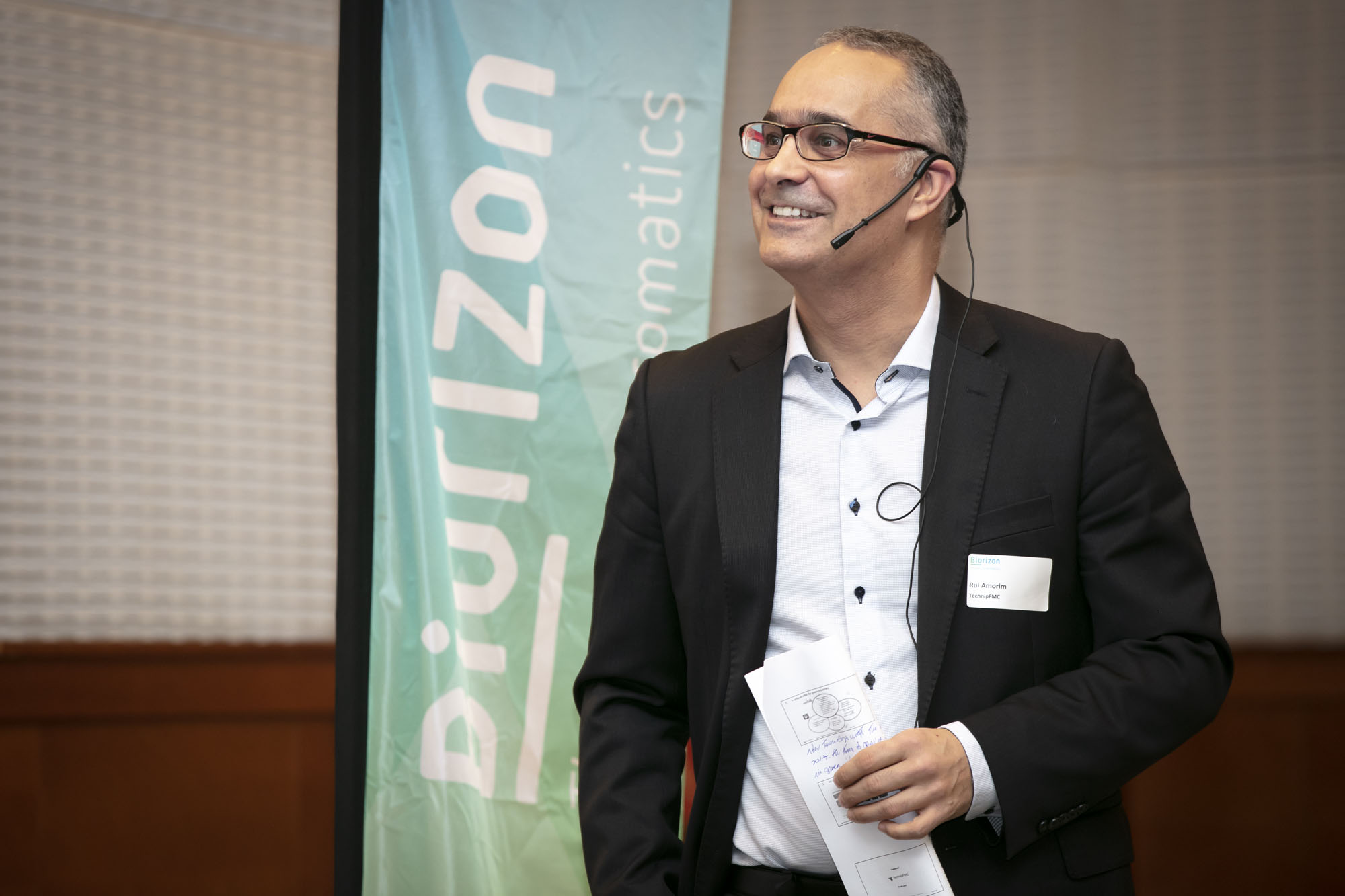 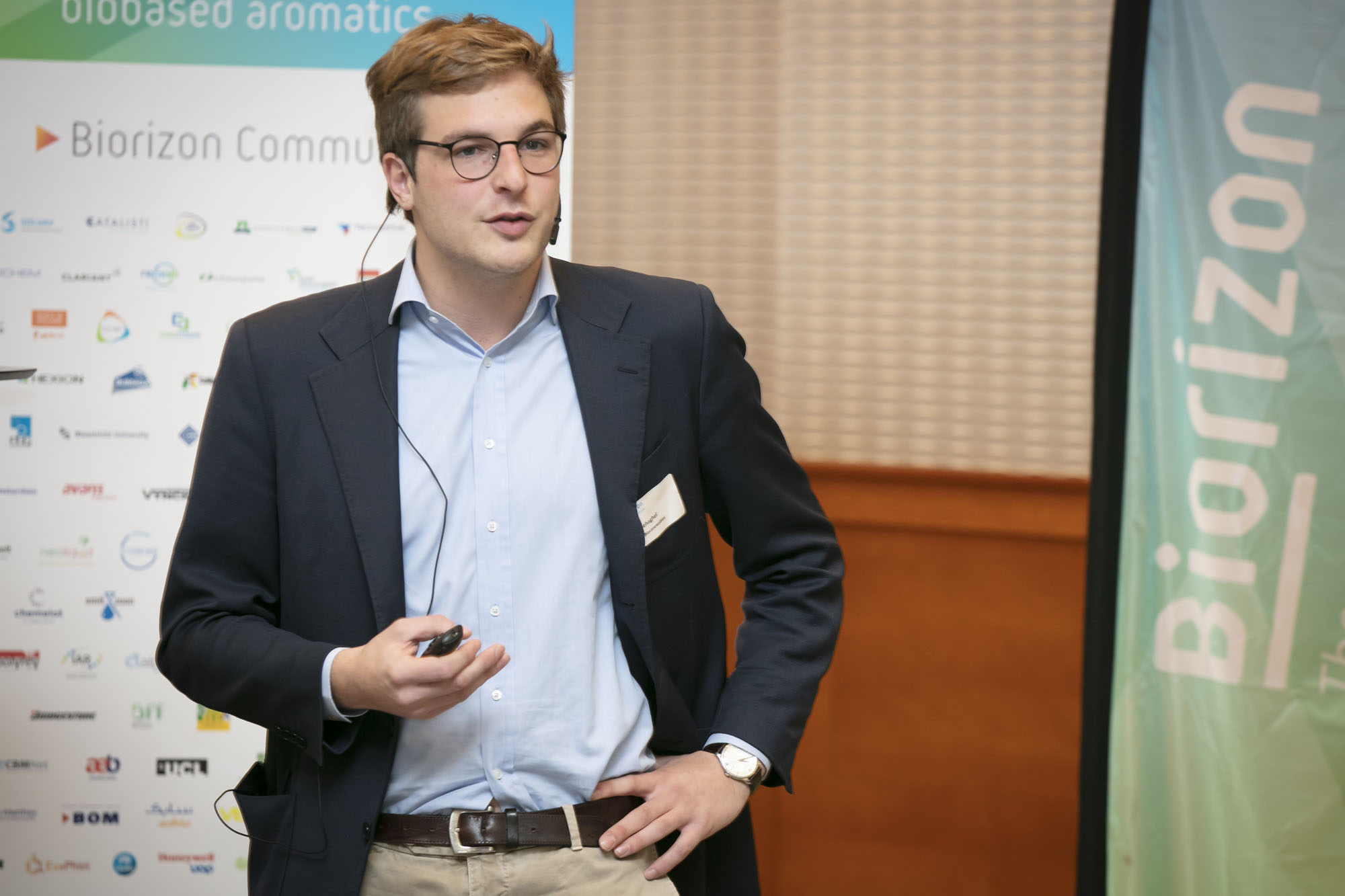 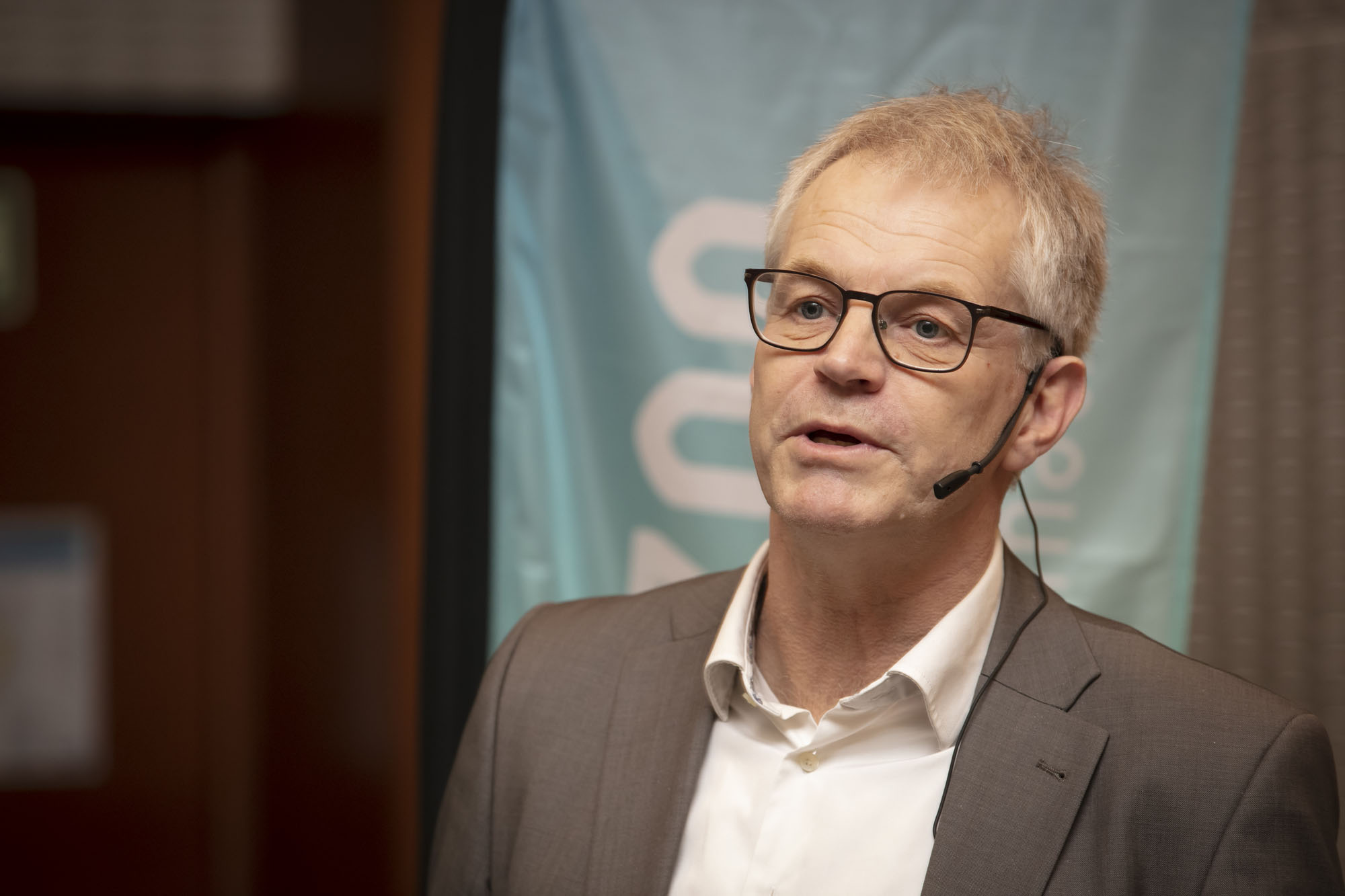 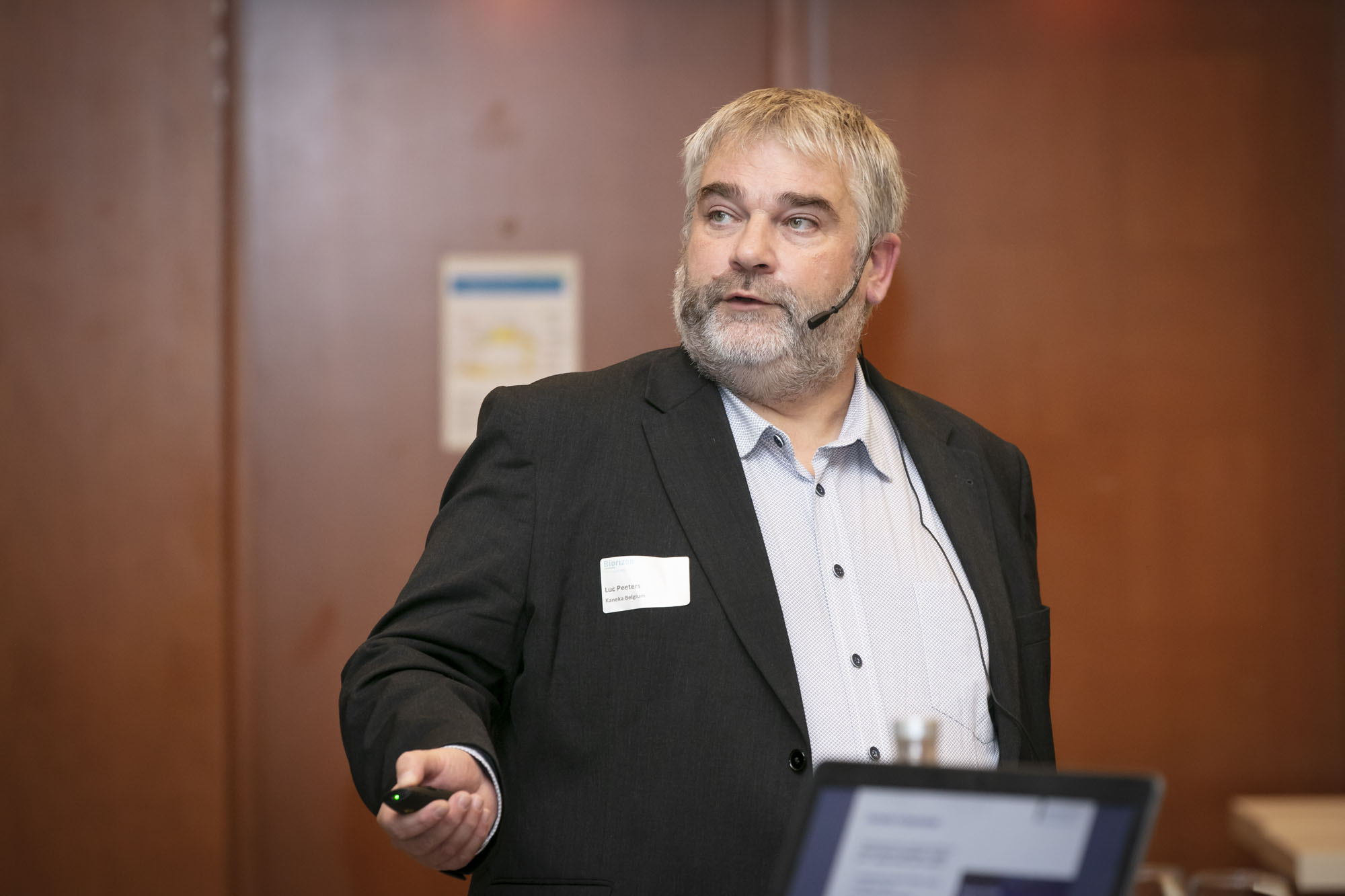 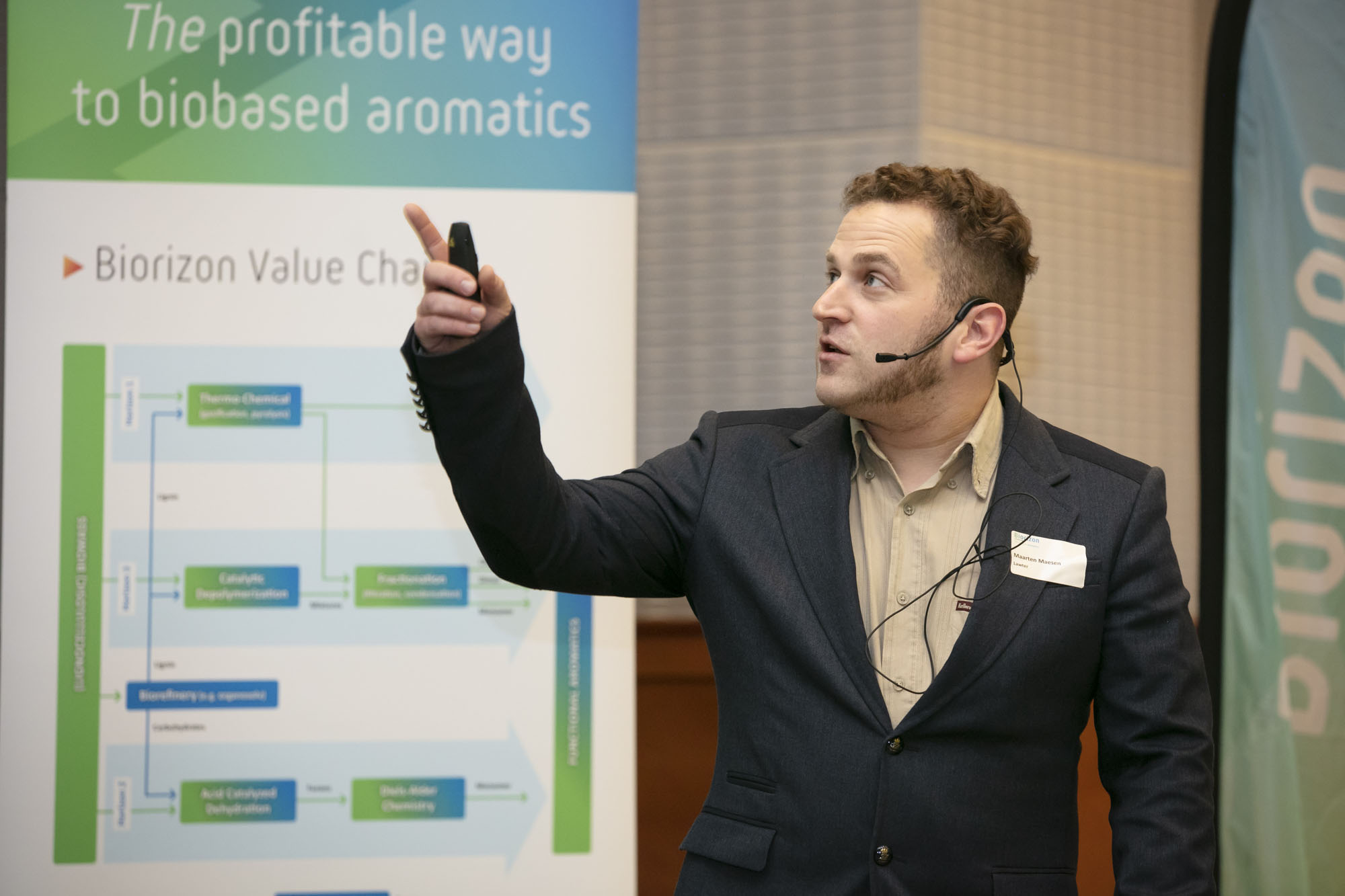 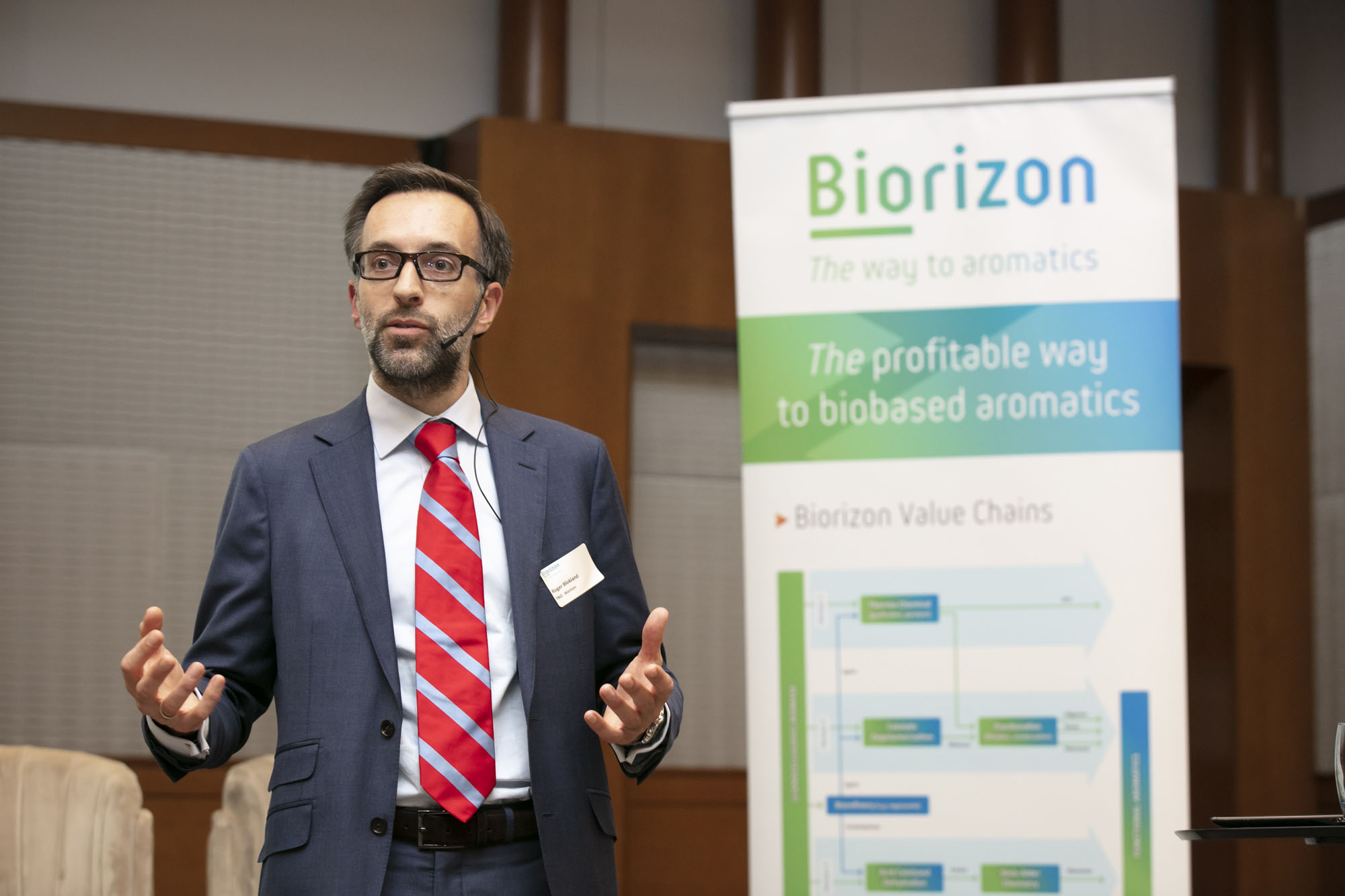 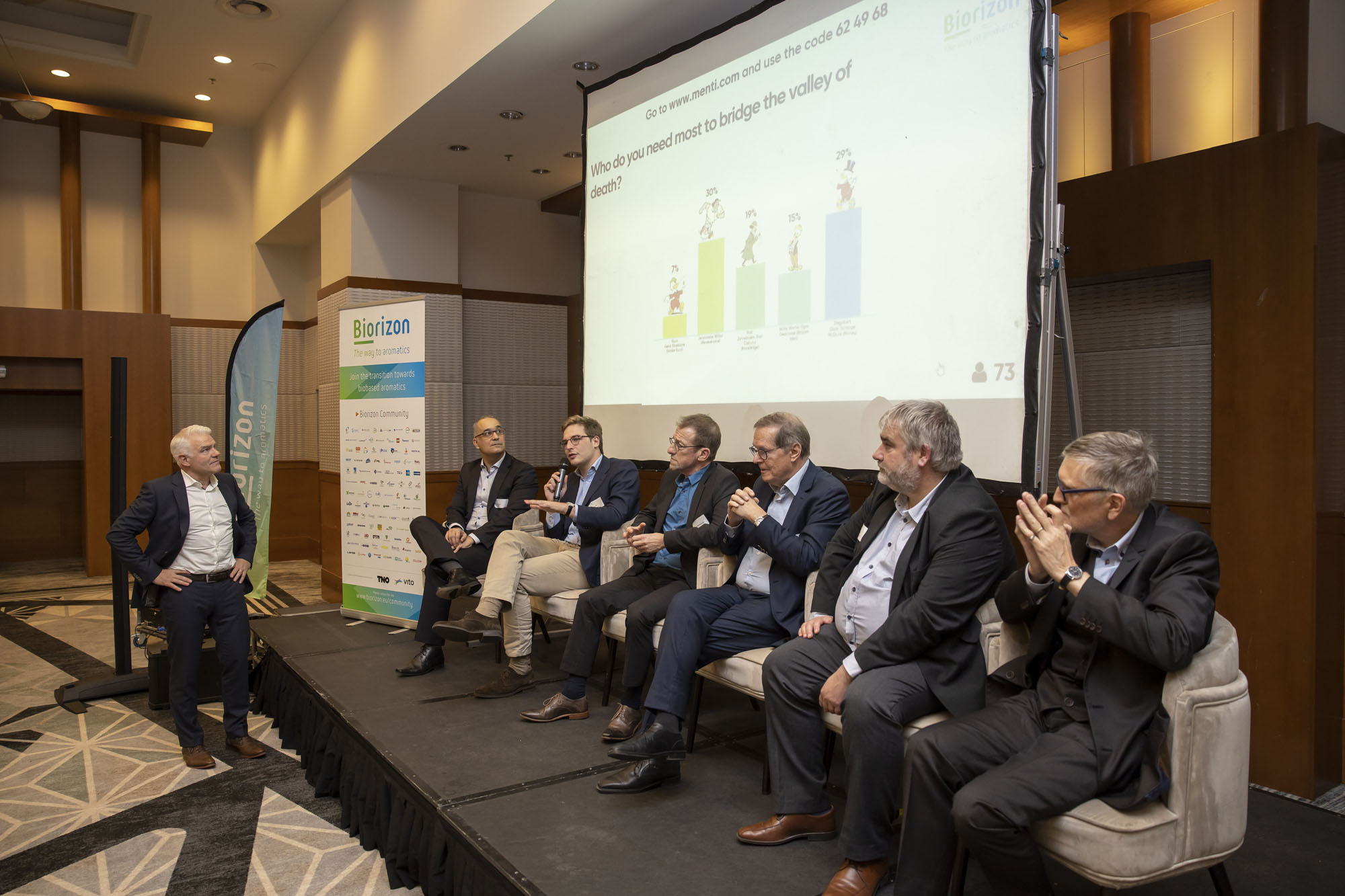 Biorizon on track for commercialisation of bio-aromatics

Biorizon is well on track towards the commercialisation of the production of bio-aromatics starting in 2025.…

In the six years of its existence, the Biorizon Shared Research Centre has made important steps…

In Mol (Flanders, Belgium), LignoValue was officially opened on 6 October. It is the first and…