No Comments
Read on
A world without plastics is inconceivable. Over the past 70 years, synthetic polymers have found their way into all corners and cracks of our society. No wonder: they are versatile, strong and light. They offer us a tremendous freedom of form and protect us, our food and consumer items from outside influences. But they also produce a great deal of non-degradable waste. This is where the challenge lies.
Pierre Gielen

Since the discovery of the plastic soup some 30 years ago, the way of thinking about the manufacture, application, degradability and recycling of plastics has been changing. The northern Netherlands is playing a leading role in this domain. This is where major plastics-related innovations have originated since the sixties, in part due to the foundation of the very first Dutch Polymer Chemistry research group over fifty years ago at the University of Groningen.

Climate issues, declining oil reserves and concerns about environmental pollution caused by plastic waste nowadays are resulting in a renewed interest in green plastics. To genuinely manufacture green plastics requires biopolymers. Some, such as PLA already exist on the market, others are still in development.

PLA (polylactic acid) based plastics are increasingly more often used for consumer products. These biobased plastics are biodegradable, but only under industrial conditions. Companies, such as Senbis use PLA for rope, while InnoFil3D manufactures PLA-based filaments for 3D printers.

PHA (polyhydroxyalkanoate) is used to manufacture plastics that are entirely biodegradable, even in a compost pile in the garden and in water, at low temperatures. However, the development of these plastics is lagging the development of PLAs by about fifteen years. In 2018, the share of bioplastic materials in the total plastics market was only 1.4%, but the European Bioplastics sector organisation expects the use of bioplastics to increase at least five-fold over the next five years. Remaining challenges include standardisation, the reproducibility of production processes, managing material properties and industrial processability using existing equipment.

The Chemical Cluster Emmen (part of Chemport Europe), along with parties in Germany and Sweden, is currently conducting international research into the latter. A large group of knowledge institutes and companies in the northern Netherlands currently is also conducting multidisciplinary research into the creation of a comprehensive PHA value chain. This is happening under the banner BERNN (Biobased Economy Region Northern Netherlands), a partnership in the field of biobased materials of the northern Netherlands universities of applied sciences NHL Stenden, Hanze and Van Hall Larenstein, and the University of Groningen (RUG).

While the future of sustainable plastics is in biobased polymers, innovative plastics recycling practices primarily are a technology of the present.

The technology for converting old plastics into new products using mechanical recycling is already well-developed, while chemical recycling is developing rapidly. The next step is adding biobased components to this process. Plastics ultimately must be fully biobased or circular.

There is broad knowledge and experience with recycling plastics, ranging from depolymerisation to design to logistics and handling, in the northern Netherlands. The region has everything in-house needed to recycle all possible kinds of plastics mechanically, chemically or thermochemically.

This may sound simpler than it is. This is because mechanical recycling requires relatively clean input flows, such as PET bottles that are collected via a closed returnable deposit system. Household flows must first be separated and contain a range of plastic types, sometimes in combination with multi-layered foils, as well as organic and inorganic contaminants.

The development of recycled plastics for the food industry in particular is subject to high demands. Regulations in that area are very strict. First, the plastics to be recycled may contain auxiliary materials that were permitted in the past, but are no longer permitted today. Second, what has happened to the plastic between use and the waste stage is unknown.

Chemical recycling, whereby polymers are broken down into monomers, is a solution to both problems. In Emmen the companies Cumapol and Morssinkhof have developed the CuRe technology, a method of chemical recycling that converts coloured polyester into new polymers. In this process, contaminants and undesirable pigments are separated from the depolymerised plastics thus creating virgin building blocks. For example, this way polyester carpets can be used to produce new polyester fibres (recycled PET or rPET).

These type of rPET yarns are currently being produced in Emmen by the polyester company Cumapol together with the recycling company Morssinkhof. They are able to produce different types of yarn for different products, ranging from carpet fibres to ropes and tensioning belts (also see Mark Ruesink’s blog elsewhere in this magazine).

Recovering plastic from household waste is a more complicated affair. Omrin, a waste collection company in the Province of Friesland, together with HVC and Midwaste in Heerenveen, has built a plastic sorting line that enables them to separate various types of plastic from household waste. Morssinkhof is still adding a recycling line specifically designed to recycle high-density polyethylene (HDPE) and polypropylene (PP). In Wijster, in the Province of Drenthe, Attero is also sorting and recycling different plastics from consumer waste.

Another raw material that has not yet been tapped for recycling is textiles. Companies that produce sport shirts are interested in this, for example. This way old polyester shirts can be transformed into new ones.

Mechanical and chemical recycling both require a relatively clean stream of used plastics. Mixed plastics generally are incinerated as waste, which produces electricity as a by-product. But thermo-chemical recycling is an option as well. In this process, mixed plastics are heated in the presence of a catalyst that breaks down the polymers into their basic aromatic building blocks: benzene, toluene and xylene (BTX). These building blocks form the basis for new, virgin PET.

BioBTX in Groningen has developed a conversion process to produce these aromatics from glycerine. The company recently opened a pilot plant for this purpose in the Zernike Advanced Processing Facility (ZAP). The next step is to make use of solid plastic waste as a raw material in this process (also see Rob van Linschoten’s blog elsewhere in this magazine).

Other companies, mostly domiciled in Delfzijl, convert polymers into still simpler basic building blocks. Enerpy produces oil, gas and carbon from organic materials and plastics with the aid of microwave-based pyrolysis. Syngas is released during this process; a mixture of hydrogen, carbon monoxide and carbon dioxide. An advantage of these methods is that they are capable of recycling laminated products that consist of a combination of plastic film and paper.

However, much of this recycled plastic from mixed flows is not suitable for high-quality applications. To improve the recyclability of packaging and consumer products, the packaging industry, the Ministry of Infrastructure and Water Management and other partners have invested in a National Test Centre for Circular Plastics in Heerenveen. Companies here can have their products tested for recyclability in batches of 100 kg.

Within this ecosystem it is possible to recycle tens of kilotonnes of plastic per year. The northern provinces each year produce approximately 90 kilotonnes of plastic waste. Recycled plastics from Heerenveen and Emmen are directly shipped to producers, such as Philips in Drachten, although more frequently to Delfzijl for chemical recycling to produce basic chemical building blocks, or to Emmen where monomers are produced that subsequently are used for regular polymer production processes.

The Chemport Europe ecosystem offers all of these possibilities, concentrated in a handful of locations spread across just a few square kilometres.

This article was created in cooperation with Chemport Europe.

Attero is a nationally operating waste processing company. All of the company’s core activities are consolidated at the Wijster site: waste sorting, recycling, energy production, digestion, composting, water purification and landfill dumping. A sorting plant extracts metals, plastic packaging materials and beverage containers from the waste for recycling. Organic waste is digested to produce green gas. The remainder is incinerated to generate electricity and steam. 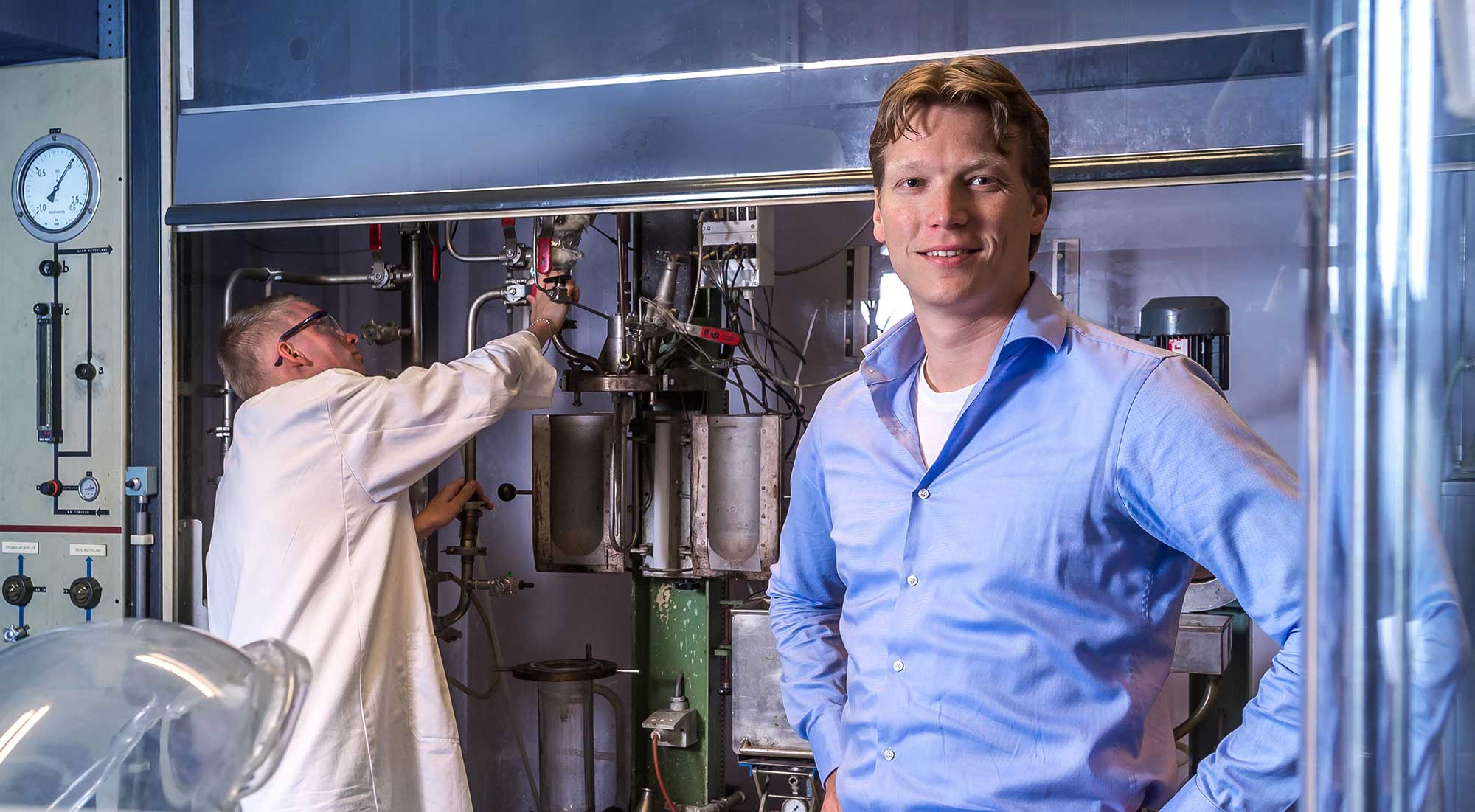 Senbis Polymer Innovations is an R&D service provider for the plastics sector. It has a fully equipped polymer laboratory and pilot plant facilities in Emmen for a range of services, such as extrusion, polymerisation, SSP and spinning fibres. In addition, Senbis produces products from biopolymers that are marketed together with specialised partners. 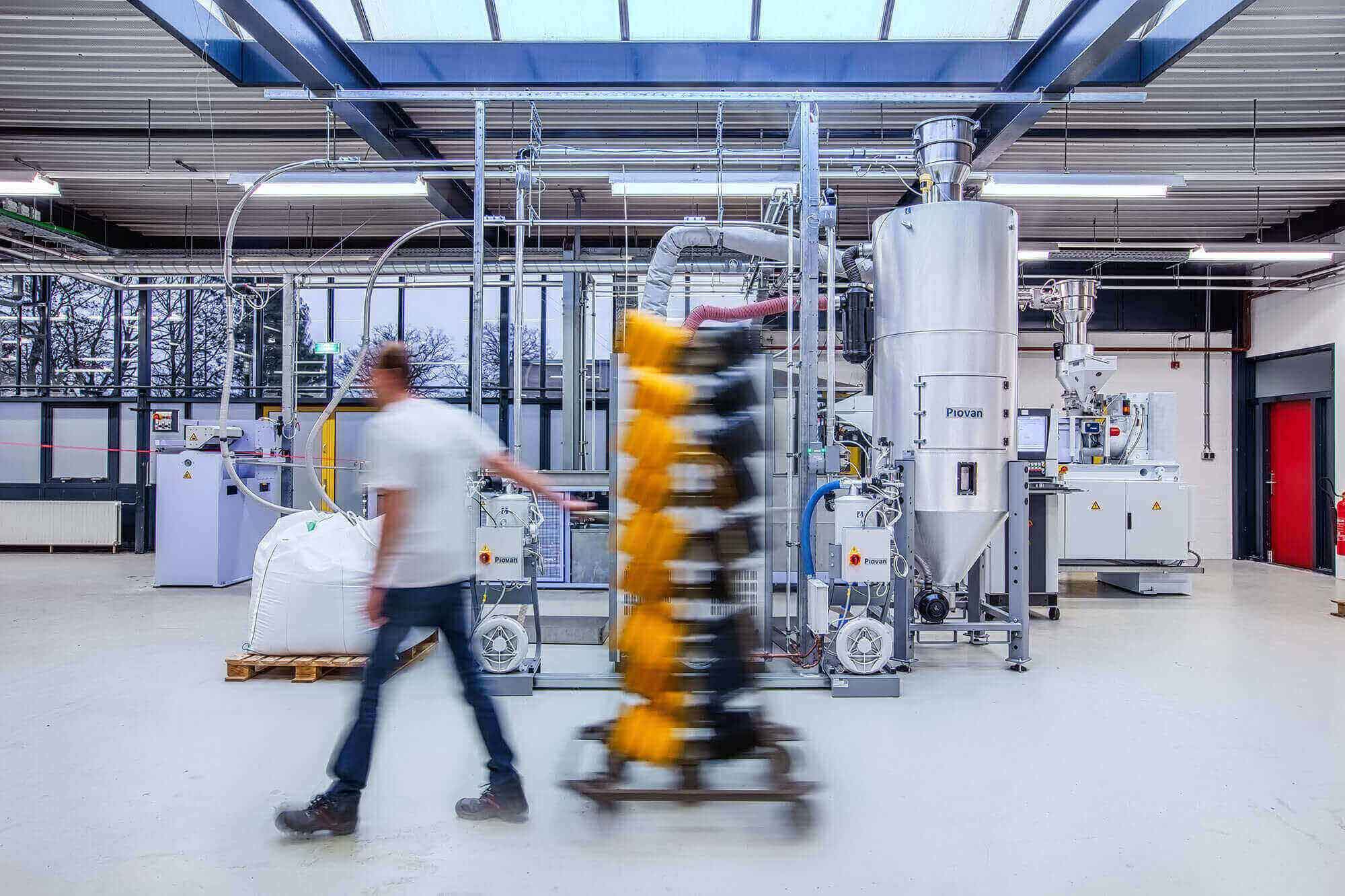 Like Senbis, InnoFil3D is a spin-off from Diolen Industrial Fibres in Emmen. Innofil3D produces mono-filaments for 3D printers and has since grown into a leading producer in this market segment with huge potential. The company has since been acquired by BASF 3D printing solutions. The company recently started operating under the name UltraFuse FFF. 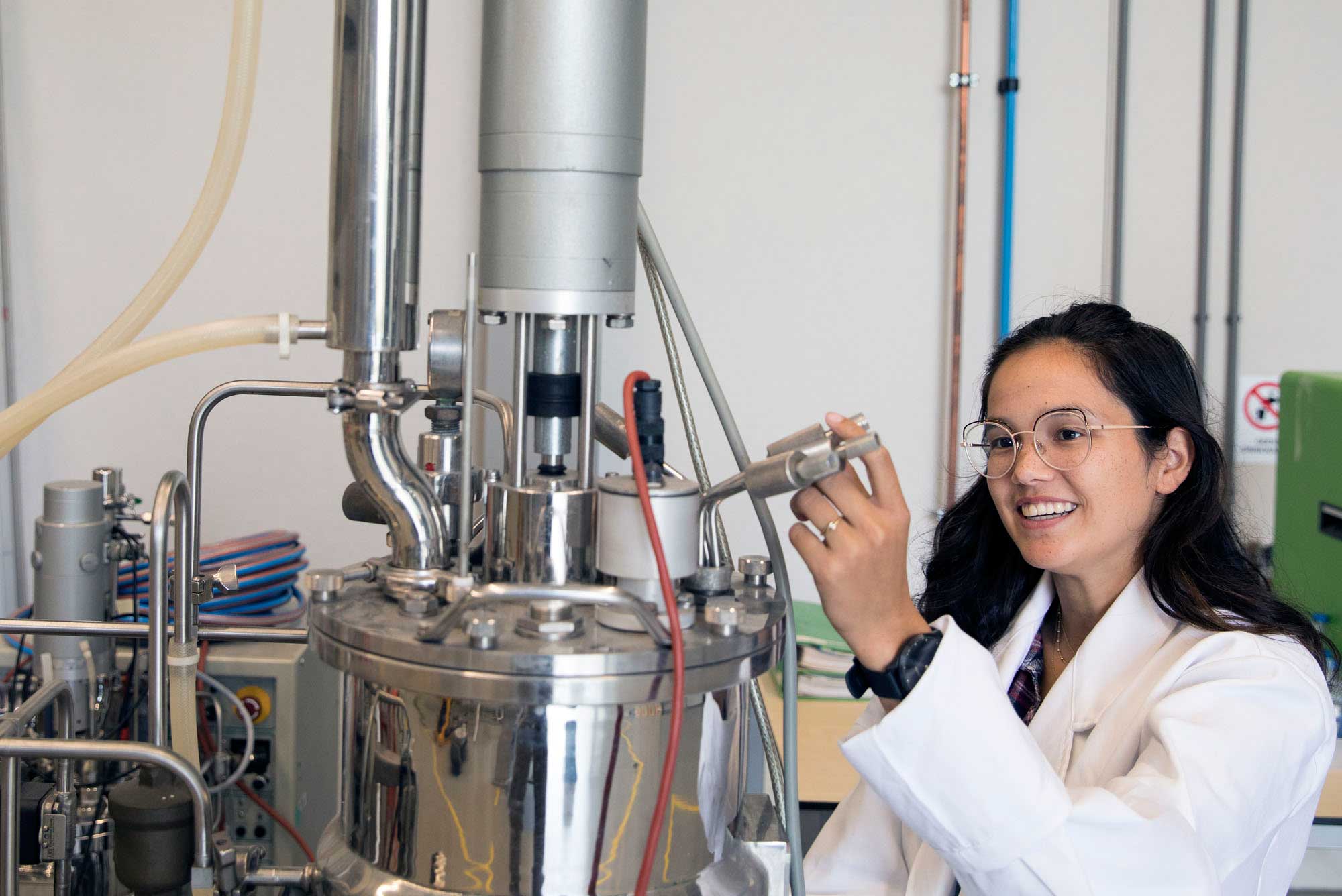 Biobased Economy Region Northern Netherlands (BERNN) is a partnership of the four northern universities of applied sciences and the University of Groningen. BERNN focuses on converting knowledge into industrial applications in various projects which also involves the senior secondary vocational education sector and the business community in the region, such as the Circular Biopolymer Value Chains for PHA and Cellulose project. 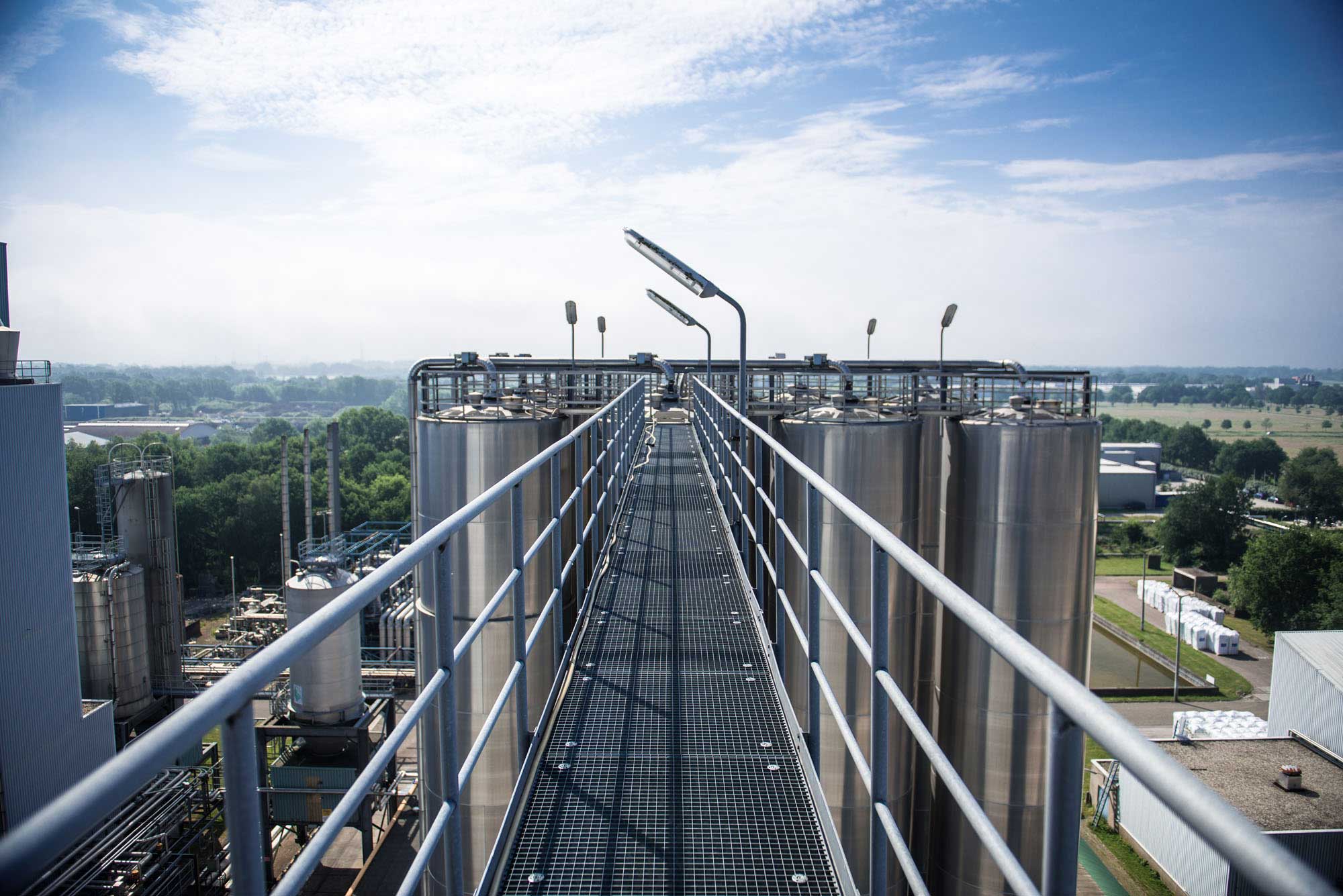 Cumapol in Emmen specialises in chemically upgrading recycled polyesters. The company offers various services to the polyester industry: regranulation, compounding, crystallisation and solid state polymerisation. Together with partners Morssinkhof, DSM-Niaga, DuFor and NHL Stenden, Cumapol is developing the CuRe technology: a ‘rejuvenation cure’ for polyester. This chemical recycling method also makes it possible to convert coloured PET into a colourless granulate with the same properties as virgin-grade polyester.

BioBTX Groningen transforms non-food biomass and plastic waste into sustainable BTX: benzene, toluene and xylene. BTX are essential components for manufacturing high-quality materials, such as new plastics. Because of sustainable BTX, plastics can become part of the circular economy as a result of which the production of plastics is no longer dependent on fossil sources. 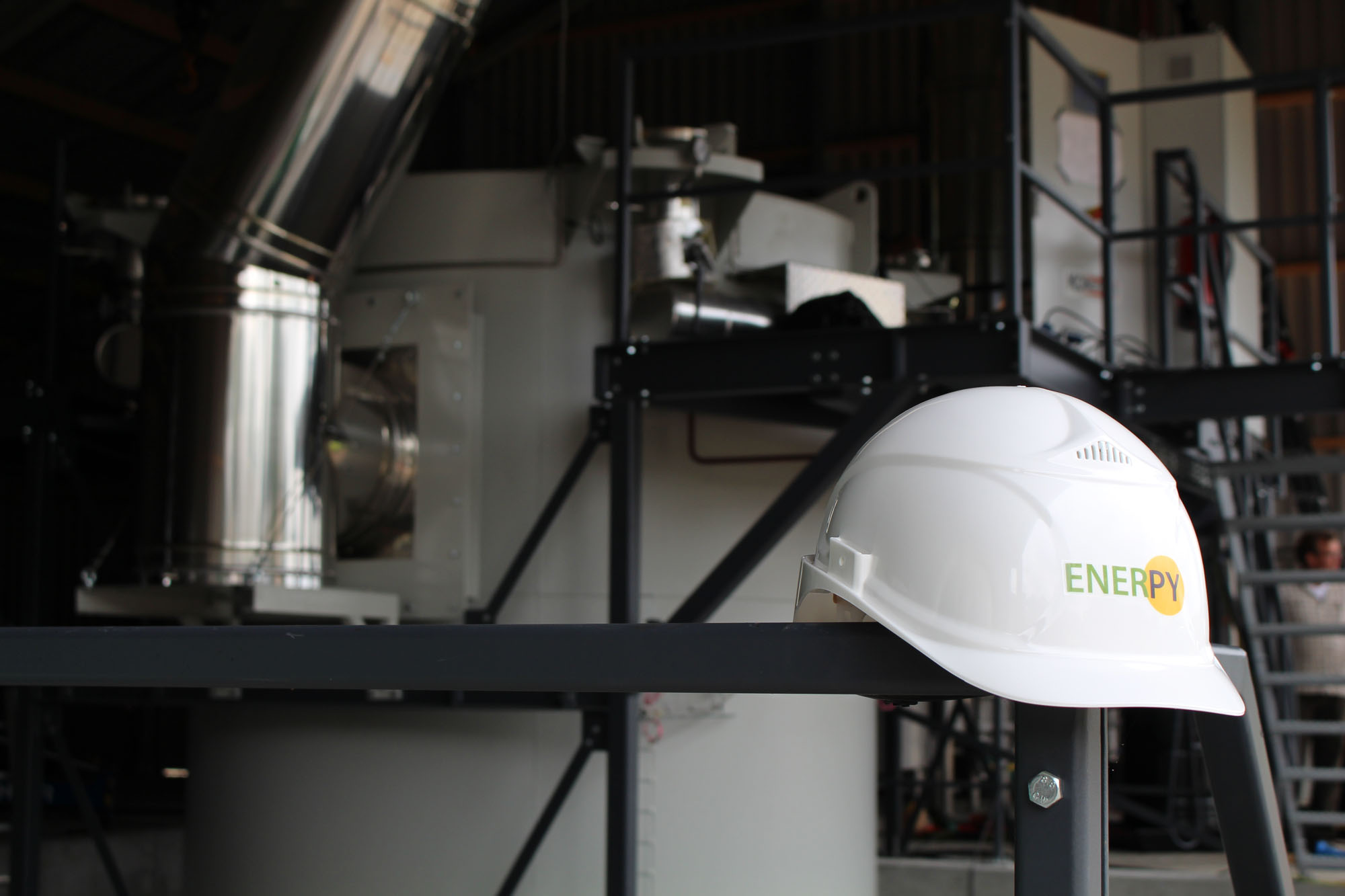 Enerpy in Delfzijn focuses on recovering raw materials (and energy) from problematic organic waste, ranging from agricultural-industrial residues, used car tyres, green waste, household waste and litter to industrial waste. The company has developed patented pyrolysis-related technology that makes use of microwave technology (radiolysis) for this purpose. This process is used to recover carbon, oil and gas. 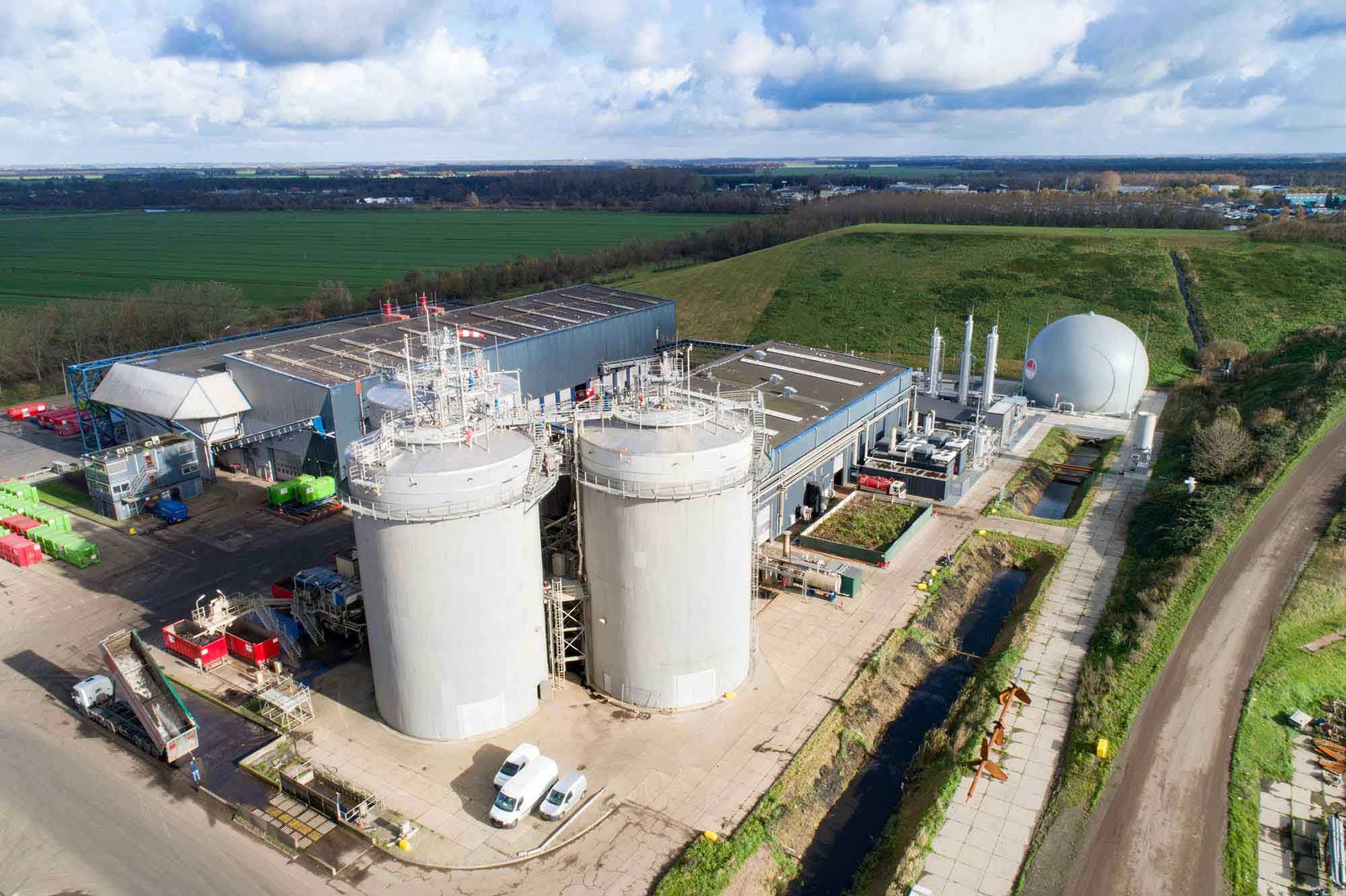 Omrin (Frisian for ‘cycle’) is a waste collection and processing company. Its objective is to recover as many raw materials as possible and to generate renewable energy. Together with its colleague companies HVC and Midwaste, Omrin opened a 65 kilotonne plant in Heerenveen for the purpose of sorting plastic packaging waste. 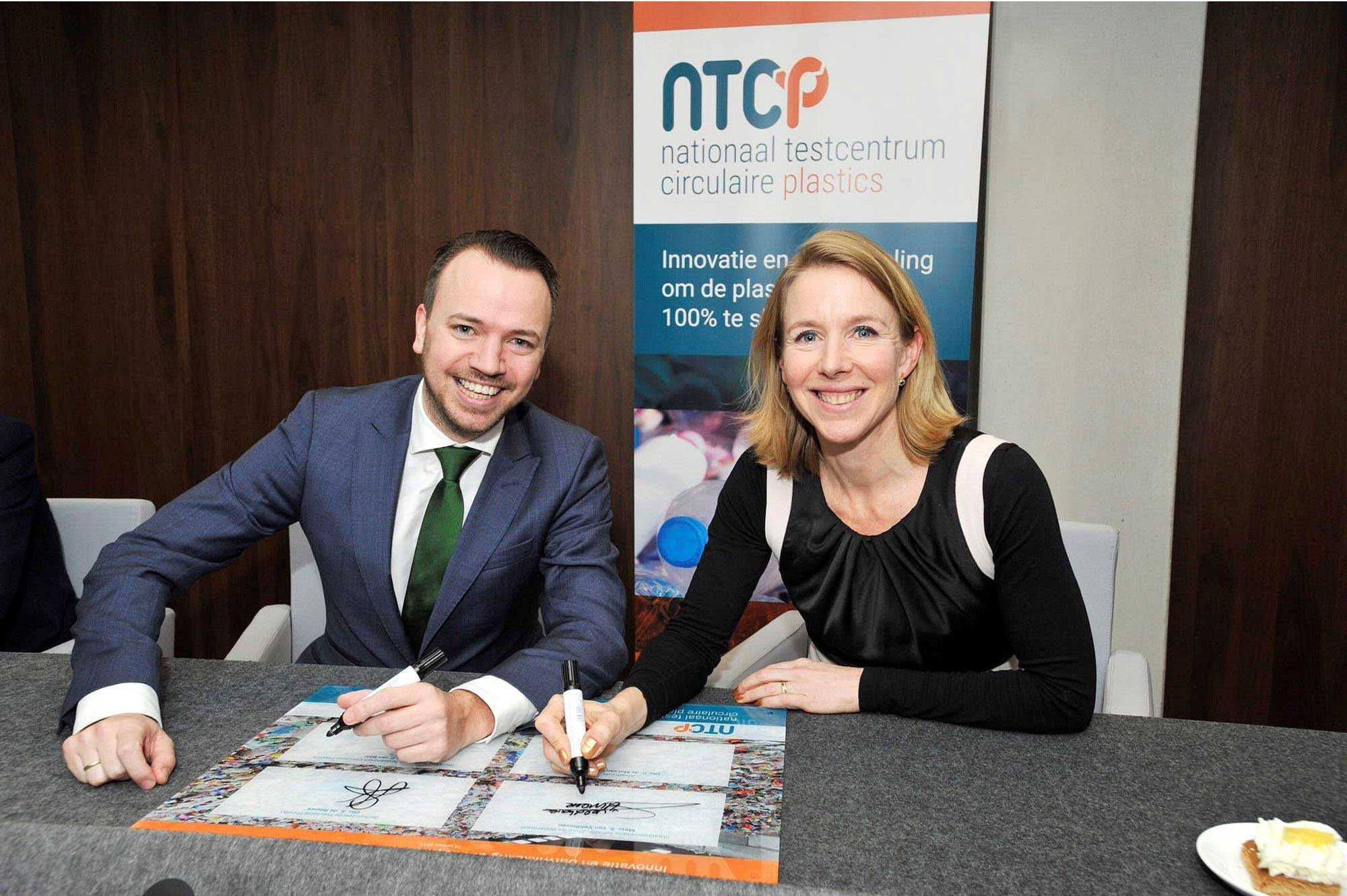 In Heerenveen, companies, knowledge and educational institutions, the Friesland Circular Association and the waste processing company Omrin are working together on the realisation of the National Test Centre for Circular Plastics (NTCP). This Centre will actively be working on improving plastic packaging sorting and recycling techniques. The objective is to significantly increase the share of recycled plastics used in packaging. In addition, the NTCP will be providing general information to the public. The NTCP was created with contributions from the central government, the Province of Fryslân and the Waste Fund.
Photo: the Frisian deputy Sander de Rouwe and Minister Stientje van Veldhoven at the founding of the NTCP.

Circularity starts where plastic ends: the bins or the Plastic Heroes recycling bag. Collecting and sorting…

In the Netherlands, PET bottles can be returned to any supermarket, thanks to the bottle deposit…

PHA, the new niche market for the Northern Netherlands

Polyhydroxyalkanoates (PHA) are a niche market with great promise. The share of materials in the total…