How to get the biobased transition up and running

No Comments
Read on
How can we involve more people in the biobased transition and stimulate the use of biobased materials? That question is the focus of the SIA Taskforce for Applied Research SPRONG programme 'Living Ecosystem.'
Pierre Gielen

Programme leader Douwe-Frits Broens of the Centre of Expertise Biobased Economy emphasised during a recent meeting at Blue City in Rotterdam that Living Ecosystem is certainly not only about innovative high-tech materials that have years of development ahead of them, but also about low-tech materials that have been used by people for centuries, such as wood, flax or hemp. “We are used to focusing on innovations by SMEs, on start-ups with ground-breaking ideas, but do we really need that for economic growth, for getting the market moving? I don’t know. In any case, what is clear is that the transition requires different research questions and methods, different facilities and different research coalitions.”

Living Ecosystem is now actually getting underway after a period of preparation, so the meeting in Rotterdam was mainly aimed at drawing up an agenda of topics that will be worked on in the coming eight years. It is necessary to make choices: who is going to do what and why, what should be the vision for the future? By now, four areas of interest have been defined: ingredients, biobased and circular building, bio-based plastics and stakeholder science (involving stakeholders in research).

The Dutch Province of South Holland has already gathered some of those stakeholders in the Innovators’ Network Biobased Construction: architects, construction companies, manufacturers, educational parties, housing corporations and municipalities are working together on the biobased transition.

“Now we are in the phase of making breakthroughs visible with this network, showing what this transition can mean,” says Gert-Willem van Mourik, transition manager Biobased Construction of the Province of South Holland. He adds that we do need to be realistic: “Grant providers like to hear that you are working on scaling up, but I think we are still only in the early stages. We are still experimenting.”

Several Innovators Network projects are currently underway to lead to breakthroughs. Such as a project focused on fibre processing. This will provide new earning models for farmers and market gardeners in the Westland region. They can supply the raw materials for building materials. This will only succeed if the entire chain is addressed: a farmer who produces fibres, chops and dries them must then have a buyer who turns them into an end product. It can be done on a larger scale by cooperating in central hubs. Next, someone also has to want and be able to use these materials in construction. Regulations must make this possible. And education has an important task too: to train people who are familiar with bio-based construction and building materials. “Above all, we must also make this fun, so that more people want to work in construction,” Gert-Willem says.

Similar projects exist, furthermore, in the field of insulation materials and materials to ‘top up’ urban houses with an extra floor; bio-based material is perfectly suited for this, as it is significantly lighter than concrete and steel.

According to Van Mourik, the network currently consists mainly of architects, builders, governments and knowledge institutions. He is still looking for expansion, especially among farmers and market gardeners. Participation should be of interest to them because, for example, residual flows from the horticular Westland region in The Netherlands are ideal for making bio-based building materials. “By joining now, they are able to collaborate in creating a vision of the future and to influence, experiment, be a forerunner and collaborate with other parties that may not be obvious at first, across the entire value chain. You will get the chance to sit down with executives, to express another opinion than that of the big builders’ lobby clubs. Moreover, you will come into contact with parties who are willing to be first (‘launching’) customers. Municipalities, provinces and the state are also increasingly daring to take on the role of instigators. So you will be in the front row with us when new tenders come up.”

One of the entrepreneurs who has accepted the challenge is Willem Kemmers. He participates in Living Ecosystems as director of his own start-up Impershield, but also as a leader of the biobased programme of the stakeholder organisation Greenport West-Holland. “I think it is important that higher education does research with students or that students are trained from practical situations,” he says. “This is why I spend time on this. I am also constantly busy running projects with the knowledge institutions. If I get the idea that teaching or research is starting to become a bit too theoretical, I am very happy to put down a practical example, to show what I am up against as an entrepreneur. Especially to shape the link with practice, but also to build a bond with like-minded people in the network. I see Living Ecosystem as a programme that prepares for the green transition, but at least keeps one leg in today’s society. And that is what we need, because we will not make the turnaround from linear and fossil to circular and green in one go. We need to make small steps.”

Will van den Tweel, director of BioScienz, participates in Living Ecosystems because he sees opportunities in it for his own projects. “For instance, we are working on mycelium-based alternatives for leather and textiles. We are also looking at converting agri-food residue streams to animal feed and to food. And we looking at packaging materials. We are working on various fronts.”

Van den Tweel does think there is still work to be done to create a coherent agenda for this project. The various areas of interest overlap and are not yet clearly defined, he judges. “It could be a bit more coherent. In an eight-year programme, we should take some time for exploration and try to bring the many themes together into a few topics that bind us all. There is work to be done for next meeting!”

The SPRONG Living Ecosystem programme has officially started in January 2022 and will run until 2030. Besides agenda-setting, it also pays attention to quality of research and facility sharing. This also involves students and teachers, companies and buyers.

The agenda-setting consultation will be repeated every year. Douwe-Frits Broens thinks it is important that the agenda initially reflects experiences from the different practices of, for example, construction, packaging or dyes. This leads to topics on which research and education can innovate. From there, potentially overarching themes, such as waste regulation, can emerge.

This article was produced in cooperation with the Centre of Expertise Biobased Economy.

In four workshops, a recent Living Ecosystem meeting set agenda items for the continuation of the programme. Their results in a nutshell:

Construction working group: “We are going to focus within Living Ecosystem on what needs to happen to really achieve a breakthrough in bio-based and circular building in the coming years,” says Koen Dittrich, lecturer in Circular Economy (HR). “The central question is: what really helps the frontrunners? Because producers are now caught in a vicious circle: circular and bio-based building materials are usually more expensive and are still produced on a relatively small scale. Large-scale construction is needed, and many older homes need to be made more sustainable, but most of all they need to be very cheap. Margins to do something innovative are therefore very small. That makes it difficult to scale up production of those solutions and materials. New factories will only come on stream once the building materials are certified. But the certification process costs a lot of money. Stimulating demand for these kinds of sustainable building materials is important and launching customers who are also willing to bear part of the risk are therefore indispensable. In Living Ecosystem, we want to conduct experiments and design solutions to accelerate scaling up production and the application of circular and bio-based building materials.”

Plastics working group: “There must be more bioplastics that are also recyclable, and more biodegradable plastics,” Marcel den Hollander, lecturer in Circular Manufacturing (HR), summarises his working group’s challenge. “One of our agenda items is implementation and upscaling of the use of bioplastics. This also involves looking at bottlenecks in legislation and regulations. Plastics must become bio-circular by design. They must be truly compostable under natural conditions, and better recyclable.”

Ingredients working group: “We already do a lot in the field of ingredients, meaning all substances in a cell that are soluble,” says Barbara Schrammeijer, Biobased lecturer at HR. “These include dyes, food proteins and bioactive substances, for example. From bacteria, algae and seaweed, fungi and plants, we want to unlock the ingredients with sustainable technology. Here, we are specifically looking at adding value to agricultural residual streams. We want to contribute to circular agriculture, to making the textile sector more sustainable and to the protein transition by offering alternatives to animal proteins. In doing so, we seek cooperation between knowledge institutes, governments and companies. This in turn provides interesting research for our students.”

Stakeholder Science working group: Jill de Bruijn, lecturer at Rotterdam Business School: “Within the Living Ecosystem programme, we want to harness the knowledge and power of relevant stakeholders in society to shape the biocircular materials transition. To make that possible, we want to realise a place where we can regularly conduct engaged and active research with stakeholders. For this, it is first necessary to identify the stakeholders, from education and companies to government and citizens.” 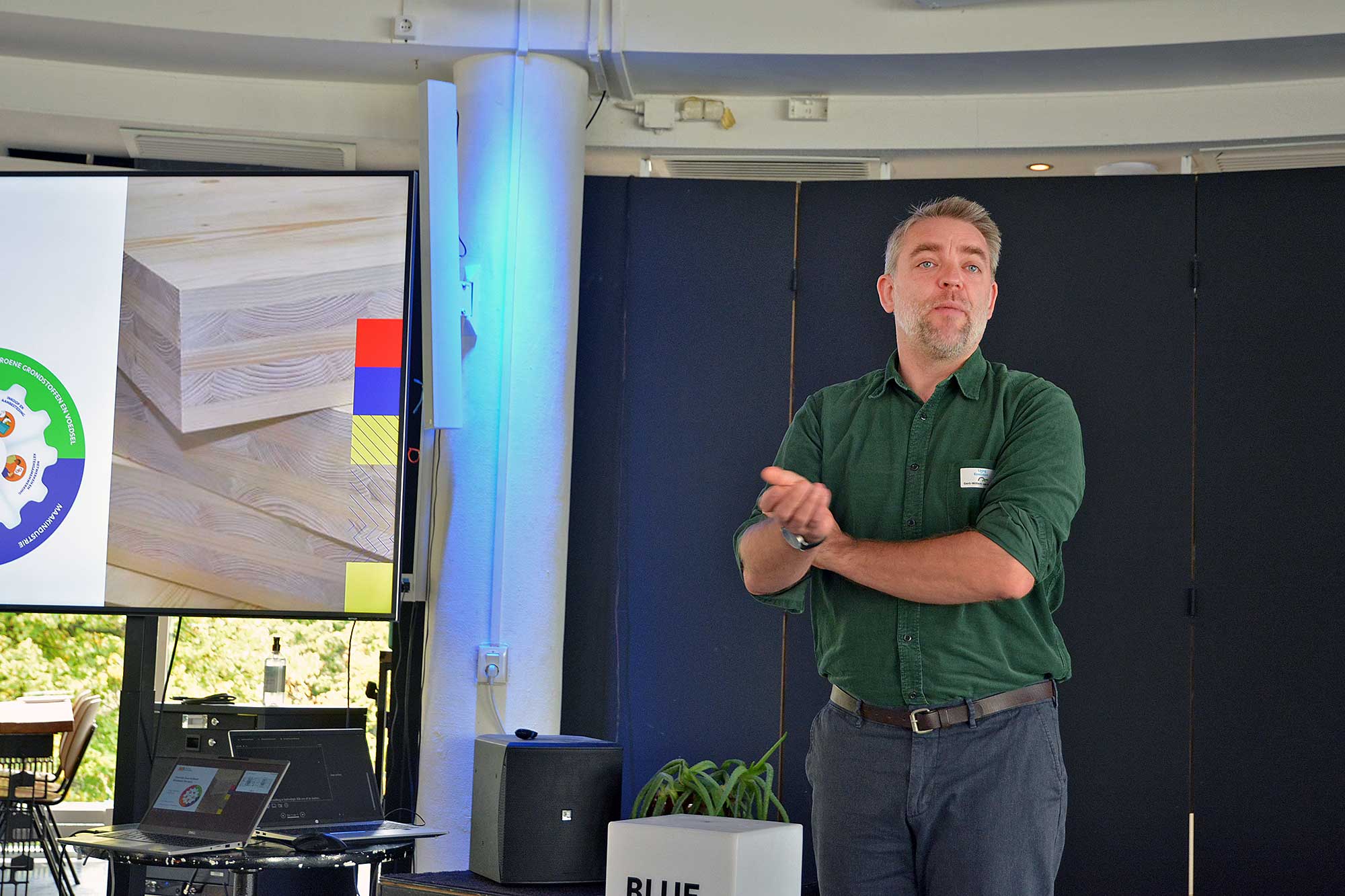 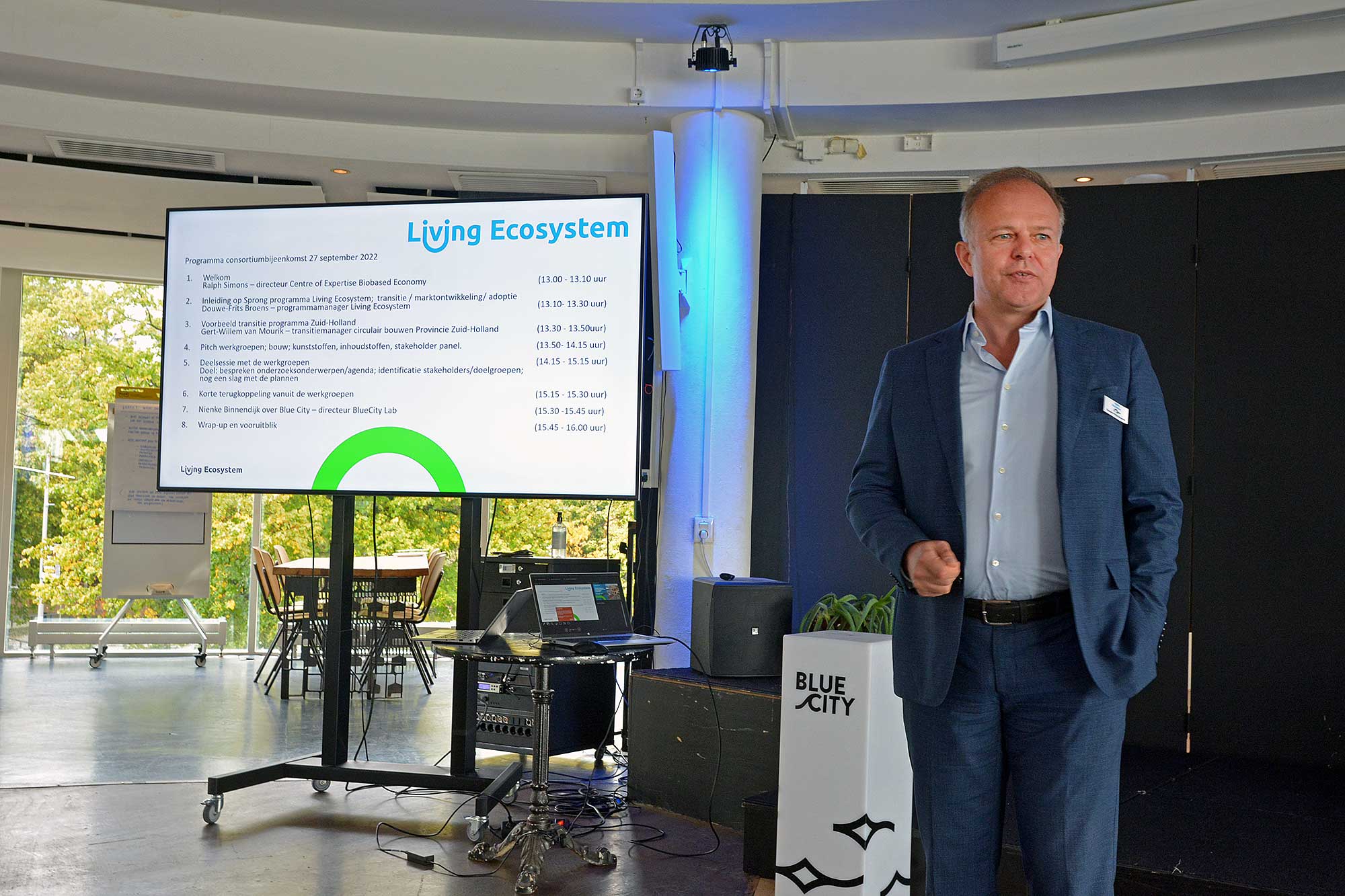 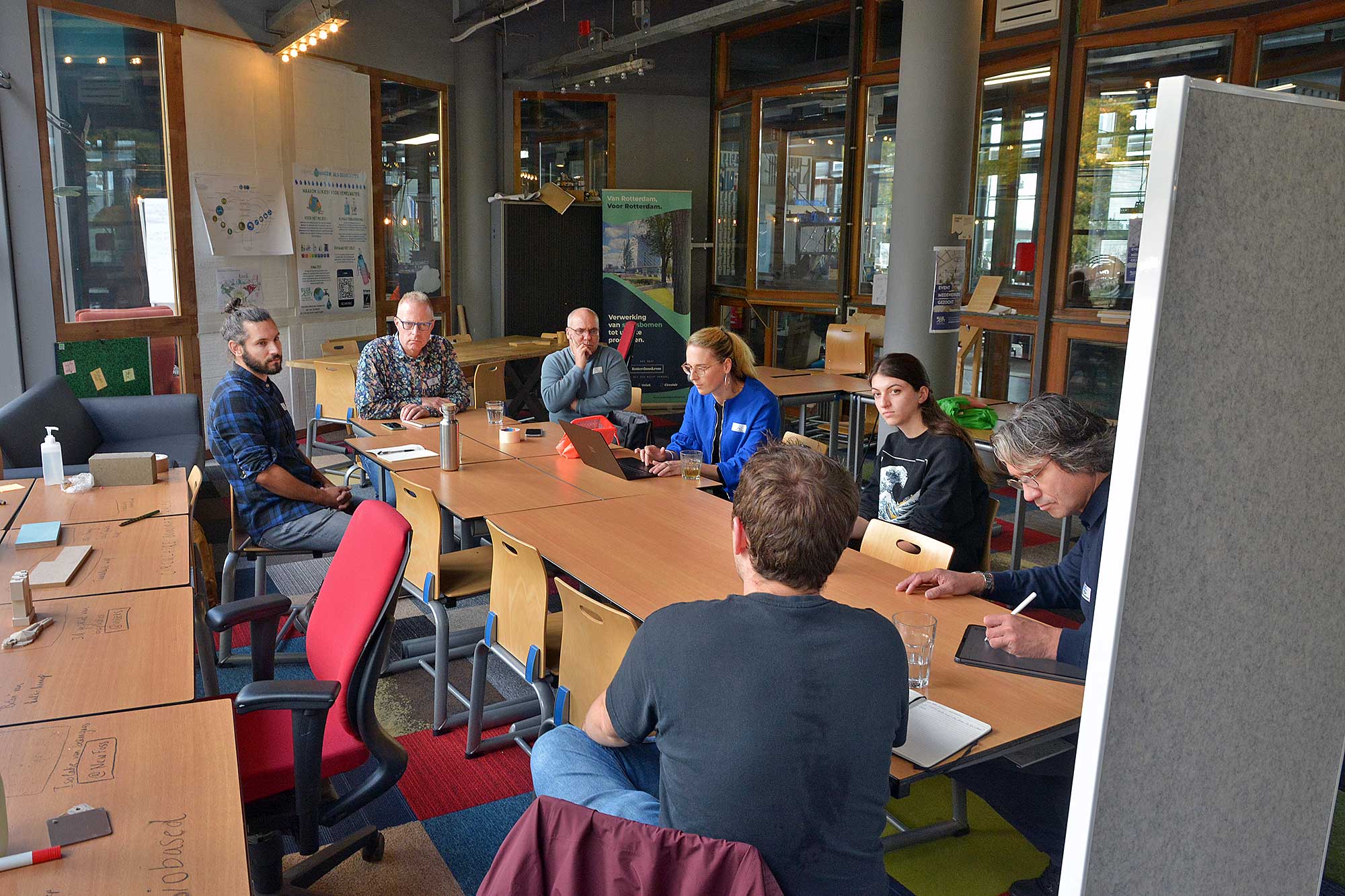 Working group Ingredients. At the head of the table Willem Kemmers. 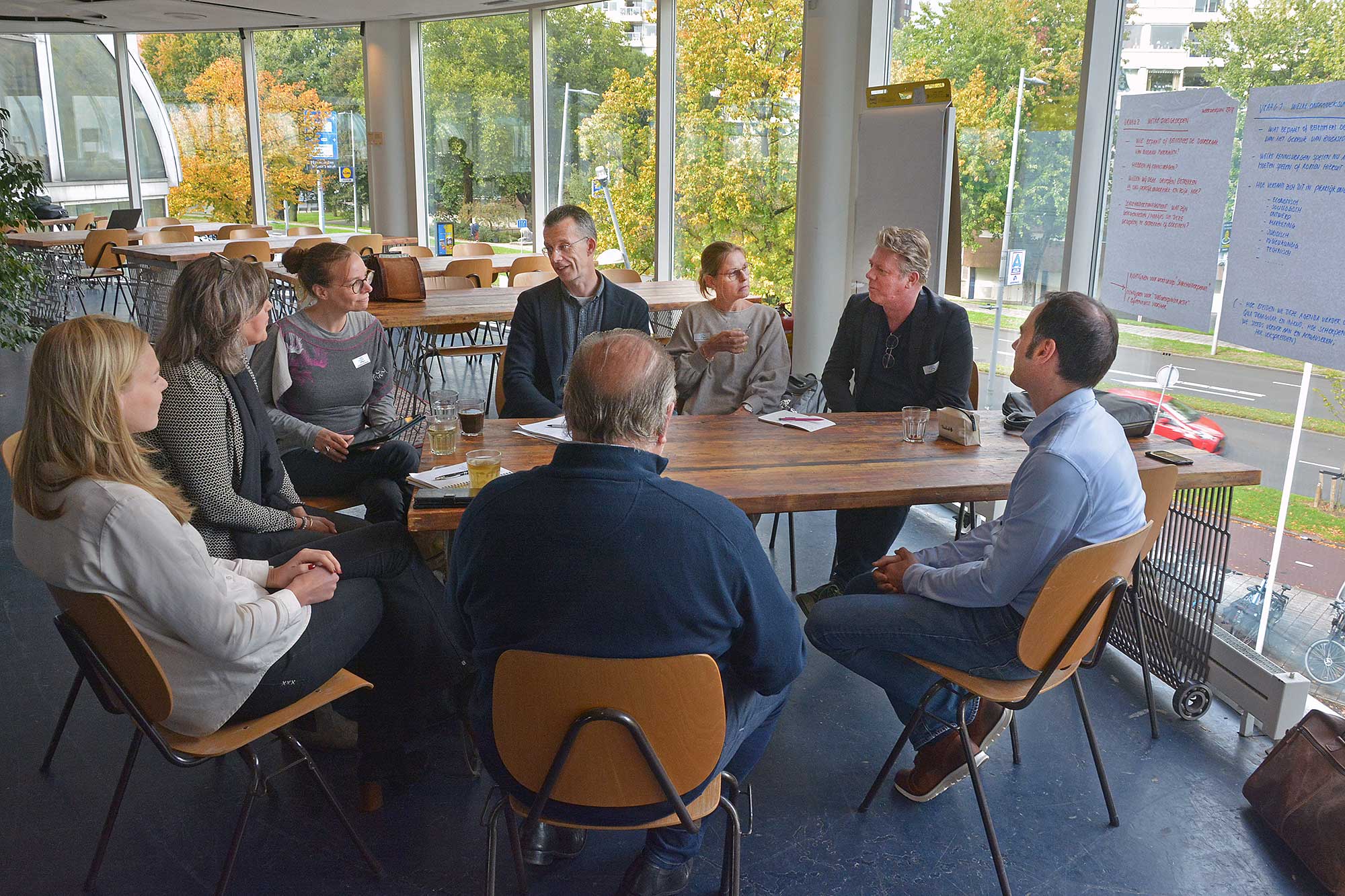 Working group Plastics. Seen at the back: Will van den Tweel

Rubber from yeast, activated carbon from plums and insoles from mycelium

Bio-based raw materials already exist and they are emerging. Especially in construction, it is no longer…