No Comments
Read on
‘The bio-economy doesn’t stop at national borders, and neither does climate change.’ That was what Henk Staghouwer, Groningen’s Commissioner for Agriculture, Nature and Water among others things, said at last week’s international ECOinnovations from Biomass congress held in Papenburg, Germany.
Pierre Gielen

That’s why we have to work across borders to get greening off the ground,’ said Staghouwer, ‘and the Ems‑Dollart Region (EDR) plays an important role in this.’

The congress hosted the kick-off for the new INTERREG project, Bio-economy Green-Chemistry, with the EDR as its coordinator. At the same time, the Bio-economy in the Non-Food sector project was concluded. Staghouwer cited this as ‘A good example of German-Dutch cooperation’.

This was endorsed by Ilona Heijen, the EDR’s Head of INTERREG. ‘Thanks to this cooperation, the Ems-Dollart Region can compete with various European metropolitan regions. There are enormous opportunities for the development of the bio-economy and green chemistry in Europe. This is why the bio-economic development of the region is mentioned explicitly as one of the opportunities for strengthening the region economically, in the strategic vision No(o)rd2020+.

‘We distinguish ourselves in the areas of climate protection, sustainability and energy,’ continued Heijen. ‘Many initiatives in the Bio-economy project have demonstrated this. The successes achieved so far lay a solid foundation for future initiatives, which will exercise an impact far beyond the project. This benefits the entire region, which will work increasingly closely together in a wide range of projects.’

Strong networks have now been created to this end in the EDR region, and many innovative products have been developed that contribute to a greener environment. Project Manager Karin Eden listed a number of these, including: agricultural residues used for 3D printing and micro‑injection moulding, compostable binding threads for horticulture, biosubstrate that forms a renewable alternative for growing on rock wool, 100% biobased traffic signs made from flax and hemp, and the extraction of the medicine Heparin from fish residues.

The current networks will be expanded further in the new Bio-economy Green-Chemistry project, to enable knowledge to be transferred between the chemical and agribusiness sectors. Some 53 companies, educational institutions and other organisations are involved in the new project. This is already 13 more than in the closed Bio-economy in the Non-Food sector project.

A number of them introduced themselves at the ECOinnovations congress. The Noordelijke Ontwikkelings Maatschappij (NOM), for example, brings parties in the region into contact with each other and provides subsidies. Emiel Elferink outlined briefly how cooperation works on the Dutch side of the border, for example in the Biocooperative, Chemport Europe and the Vereniging Circulair Friesland association.

The 3N knowledge network is involved in a range of projects on the German side, such as sustainable 3D printing and biobased insulation materials. The Hochschule Osnabrück trains people for new jobs in the bio-economy, but also identifies which green products companies in the region can produce. The project will be carried out in conjunction with the Dutch organisation NHL Stenden, which also conducts research into sustainable synthetic fibres. André Heeres, lecturer in biobased chemistry at Hanze University of Applied Sciences, Groningen, works with Hochschule Emden on three topics within the Green Chemistry project: the extraction of high-quality chemicals from fatty acids, the extraction of crop protection products and cosmetic components from Tagetes, and the isolation of natural bioactive compounds for the pharmaceutical industry.

In several short pitches and presentations, a selection from the activities of the Non-Food Biomass project was shown rapidly during the congress, and these could also be viewed and discussed in more detail during an exhibition in the conference centre.

Jan Jager of NHL Stenden University of Applied Sciences and Gerard Nijhoving of Senbis Polymer Innovations from Emmen, for example, discussed the development of sustainable fibres and biobased yarns, which can be processed on existing spinning machines. One example is a rope for fishing nets that is completely biodegradable in seawater. ‘There’s still little use being made of it, but we will certainly investigate it further, because we believe there is a market for it.’

Roland van Driel of the Dutch company Mycelco described innovative packaging consisting of linseed straw and fungi, developed in collaboration with the German linseed producer Dr Johanna Budwig. He ‘trains’ the fungi to form a tight and light network around the straw or other vegetable fibres. This is a promising development, also suitable as a building material.

Cord Grashorn of IST Ficotex displayed an innovative and beautiful speaker shaped like a snail shell, made of a mixture of PLA, wood and grass fibres. Bart Labrie of HP Moulding discussed the injection moulding with bioplastics technique for the medical industry. Harm Jan Thiewes of Millvision brought along some products made of natural fibres, including part of a window/door frame based on paper. This is applied in the tiny biobased house that students of both Drenthe College and Hondsrug College are currently building in Emmen. This also uses insulating Hempflax cladding, which was explained by Gertjan Bruins. Henk Loves of Bioframe pointed out that 90% of this structure consists of recycled or renewable materials: ‘This achieves an insulation value (Rc) of 6.5, better than a passive house.’

Designer Tjeerd Veenhoven, together with Hanze University of Applied Sciences and Delft University of Technology, is developing textiles made from algae. Jacob Bussmann of Seedforward protects seeds with biobased coating. Hermann Melcher of Emsland Stärke showed a biobased flocculant. Nina Graupner of the HSB Hochschule Bremen talked about research into fibre‑reinforced composites. Ellen Bendt and Katerina Amprazi of the Hochschule Niederrhein developed a durable modular shoe, which also contains smart electronics to deliver foot reflexology massages. Lenze Leunge of Limm Recycling spoke enthusiastically about his system for the collection and recycling of coffee cups.

Alongside these short pitches, the first day of the congress also saw some more extensive presentations, such as those by André Faaij (University of Groningen) on the availability of biomass, and Pierre Bouillon (FAO) on sustainable forestry. The second day, 21 March, featured a varied programme, with parallel sessions on themes such as sustainable mobility, carbon management, Bio-LNG, sustainable land use, soil improvement and technological innovations.

The ‘Bio-economy in the Non-Food sector’ project is supported under the ‘INTERREG V A programme Deutschland-Nederland’ with funds from the European Regional Development Fund (ERDF). The project is co-financed by the Netherlands’ Ministry of Economic Affairs, the provinces of Drenthe, Flevoland, Fryslân, Gelderland, Groningen, Noord-Brabant and Overijssel, and the German federal state of Lower Saxony. 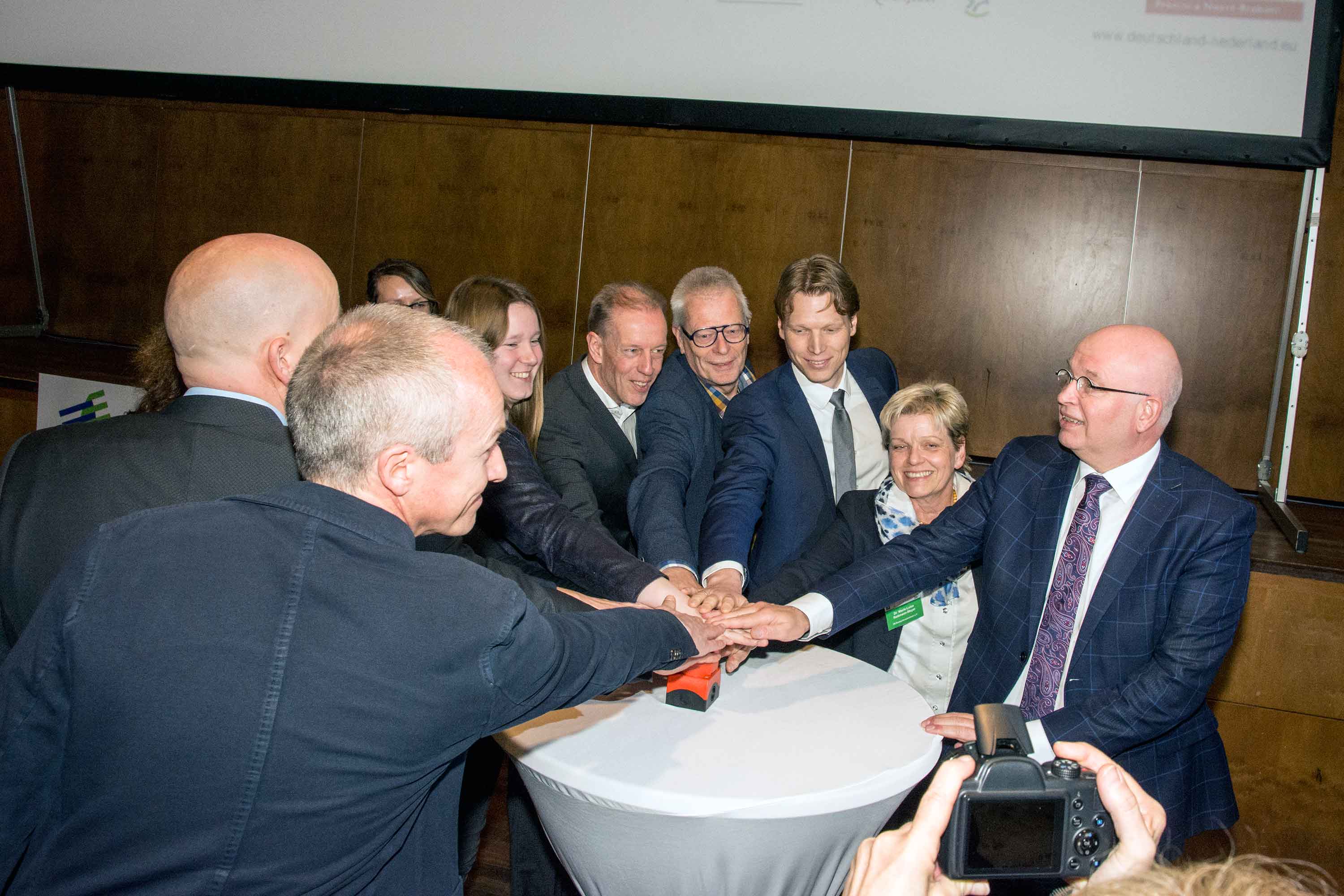 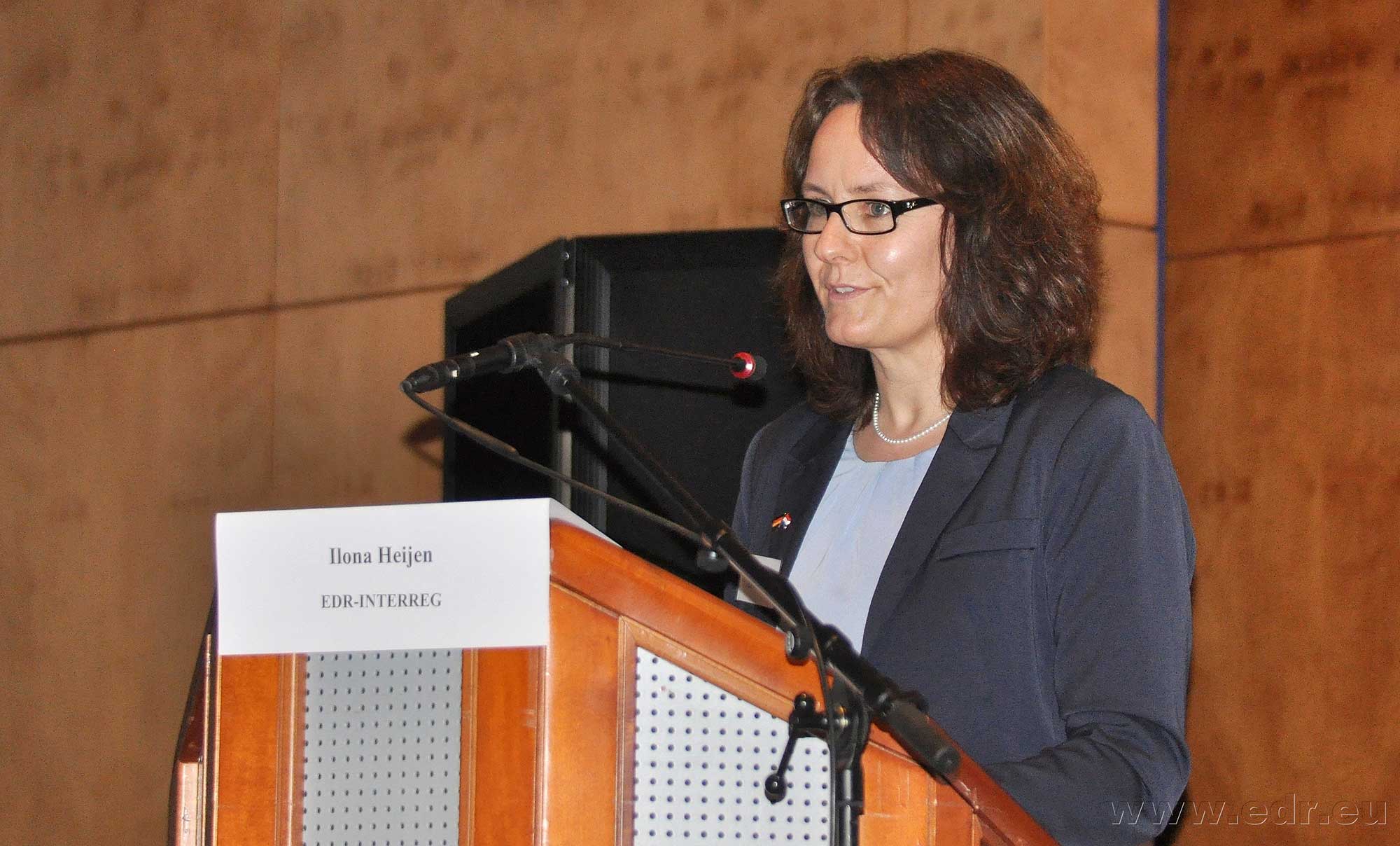 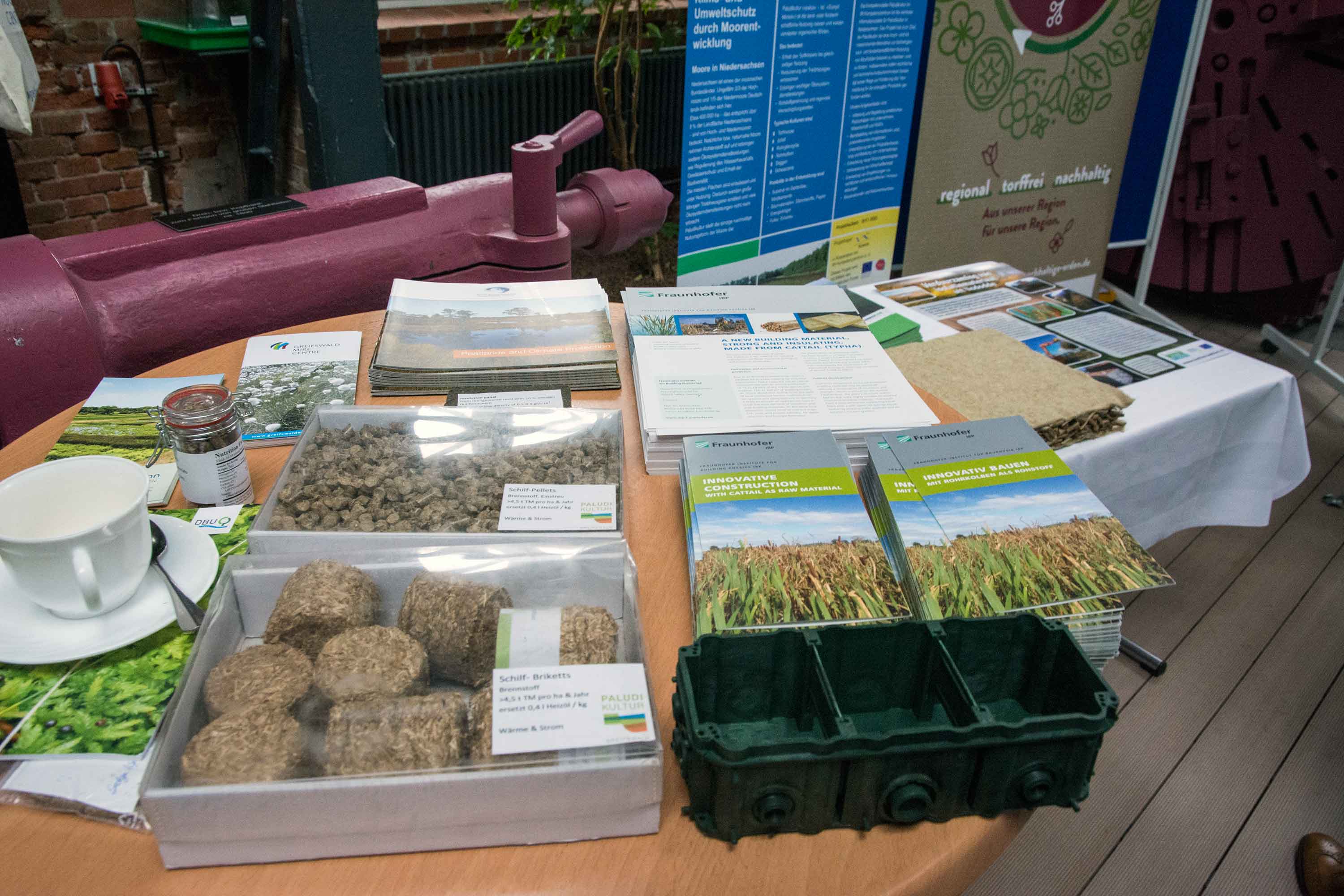 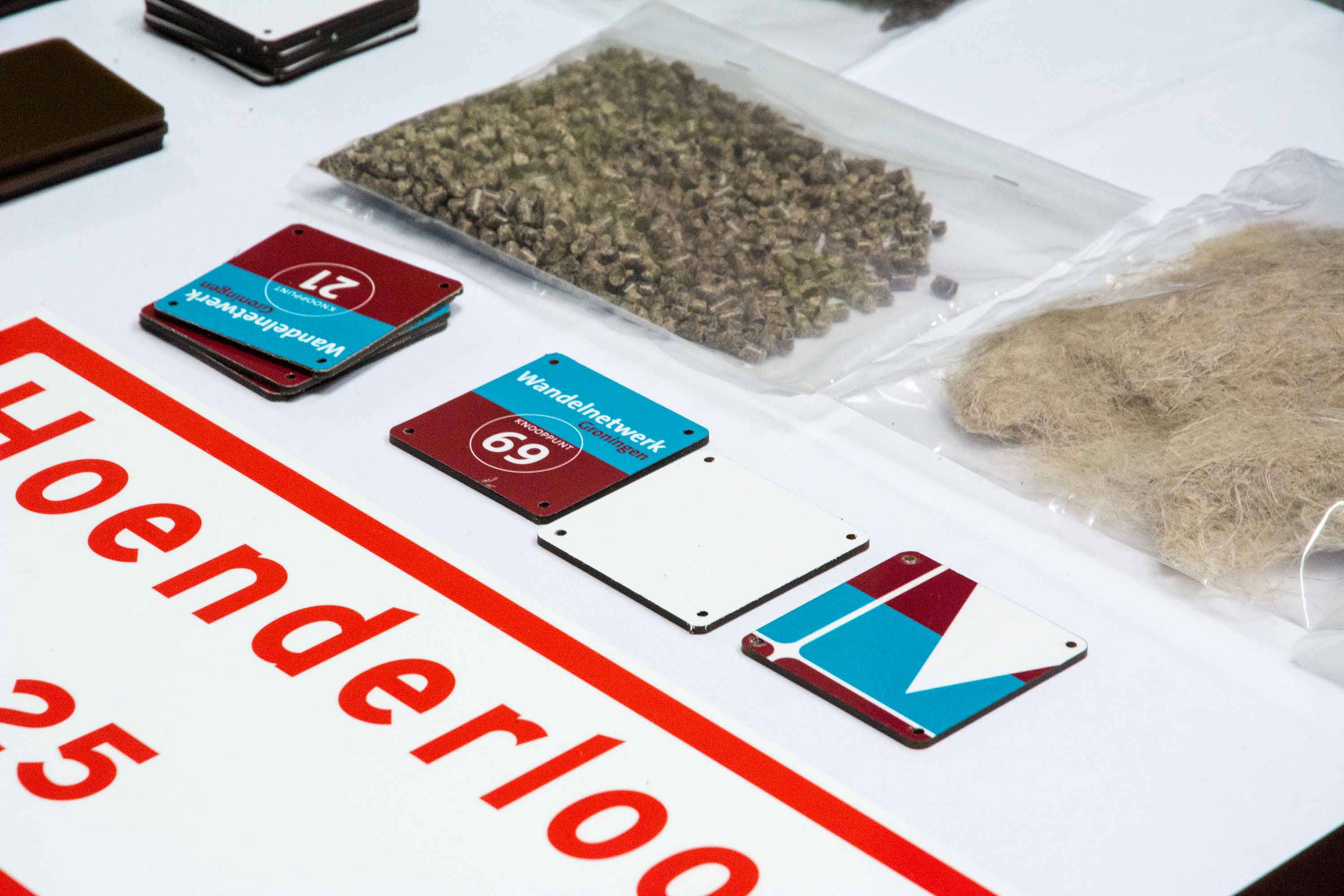 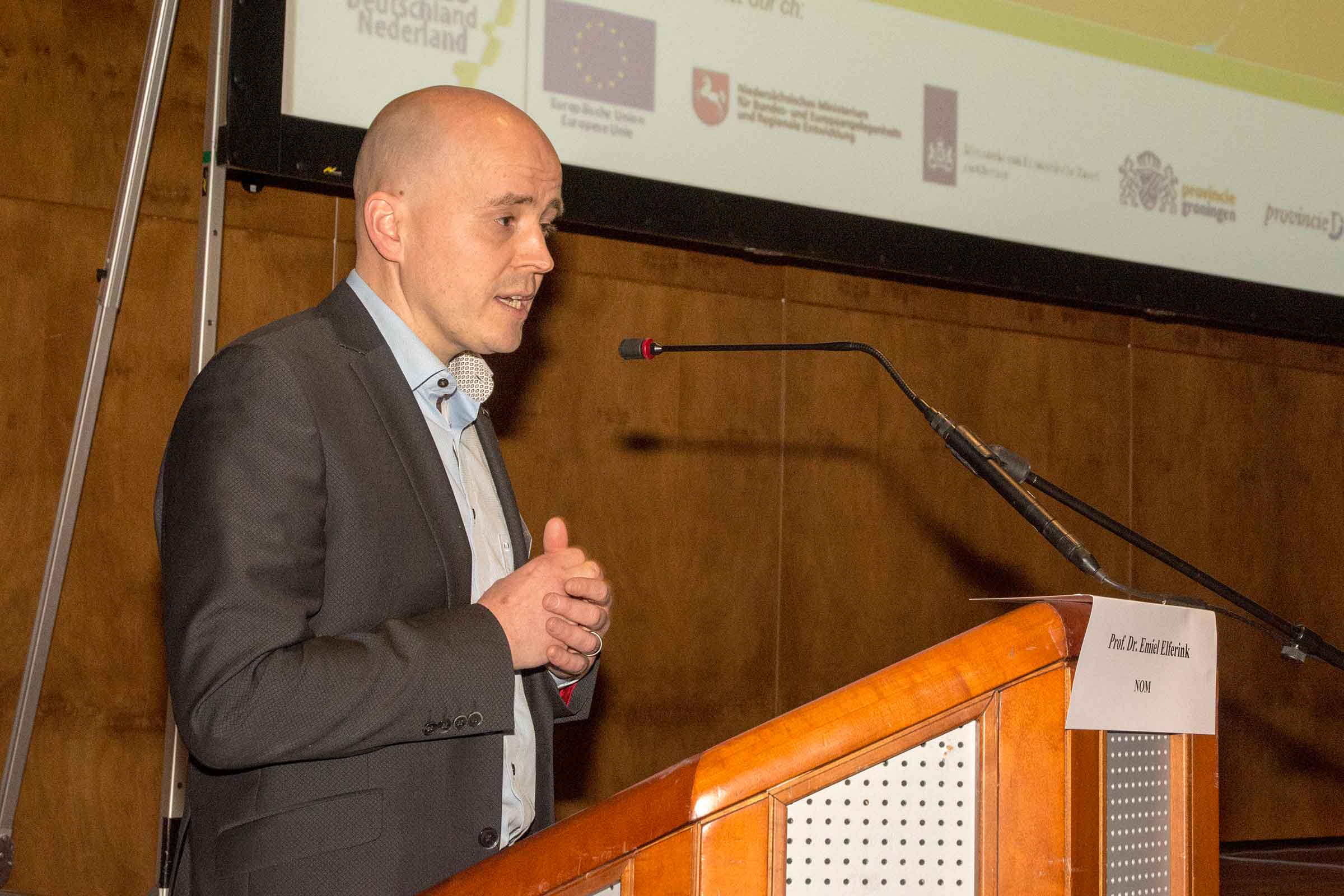 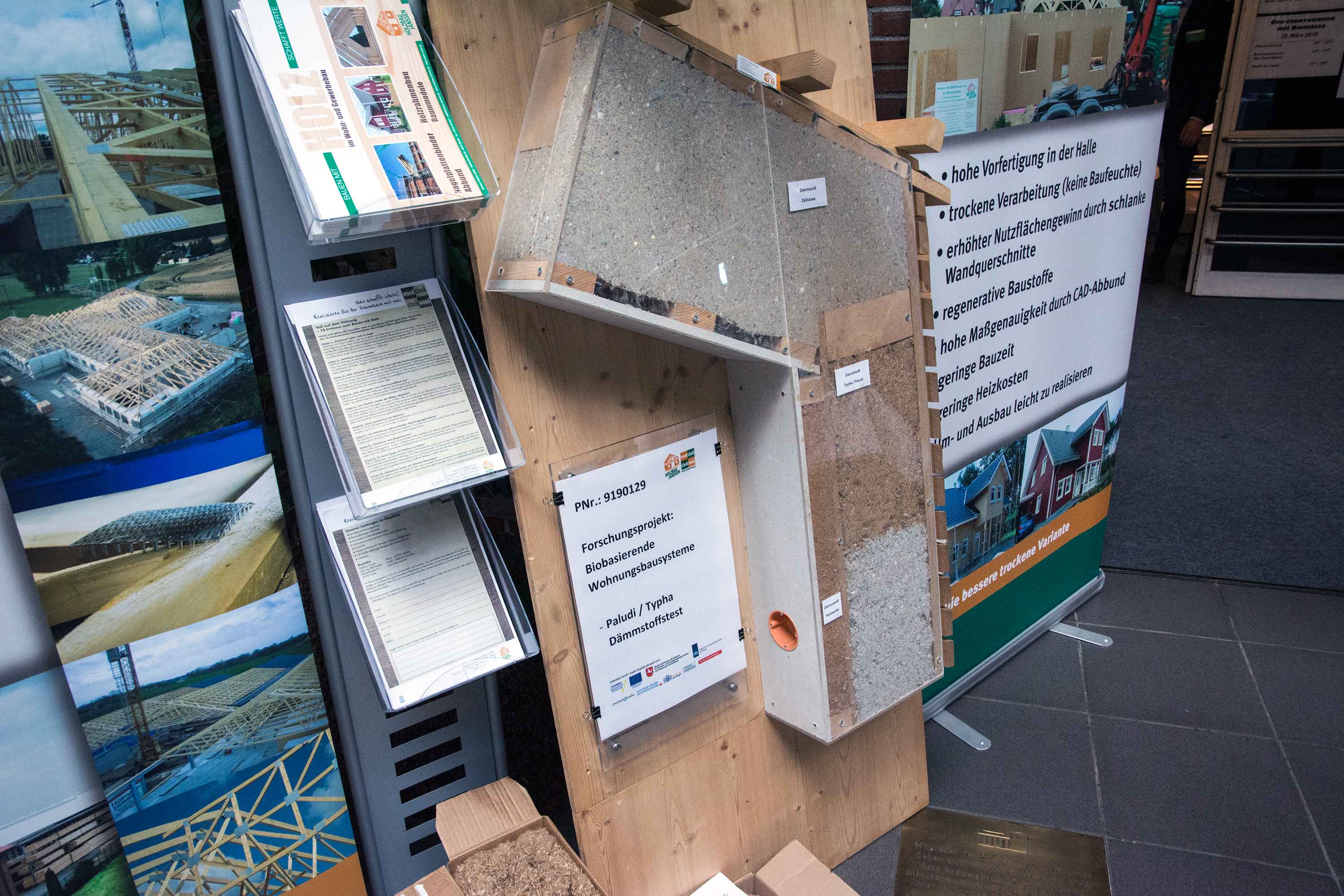 Packaging from mycelium and linseed 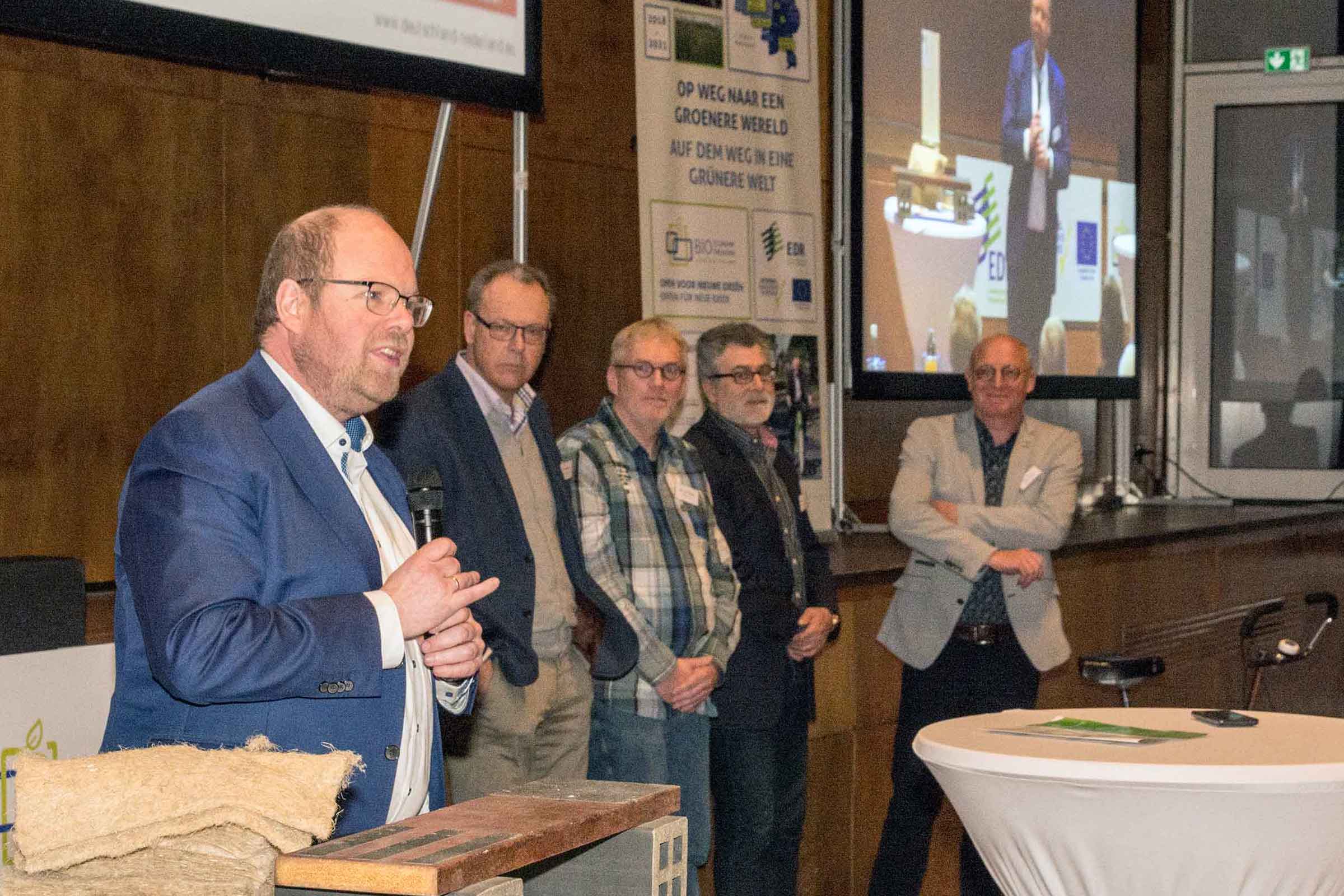 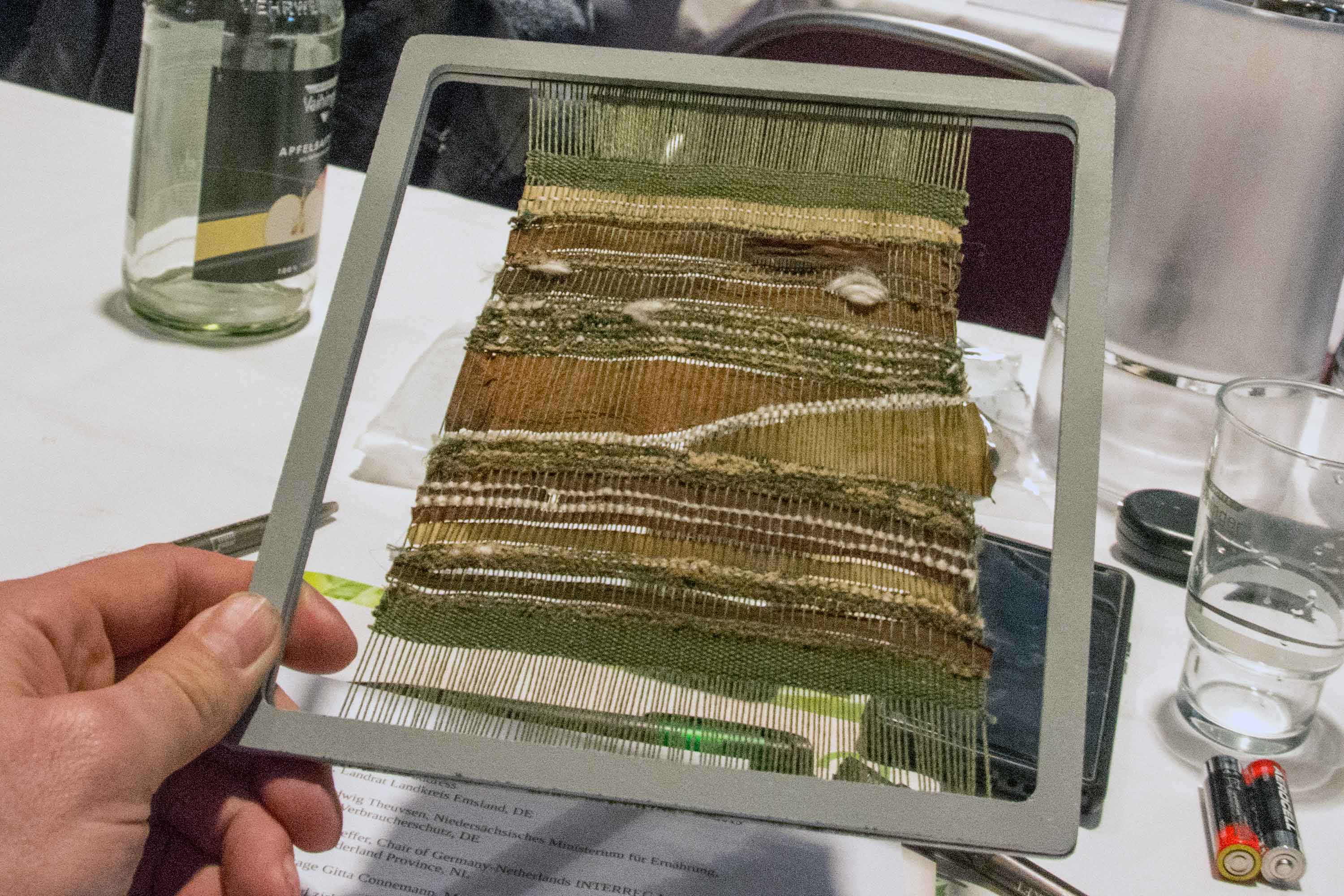 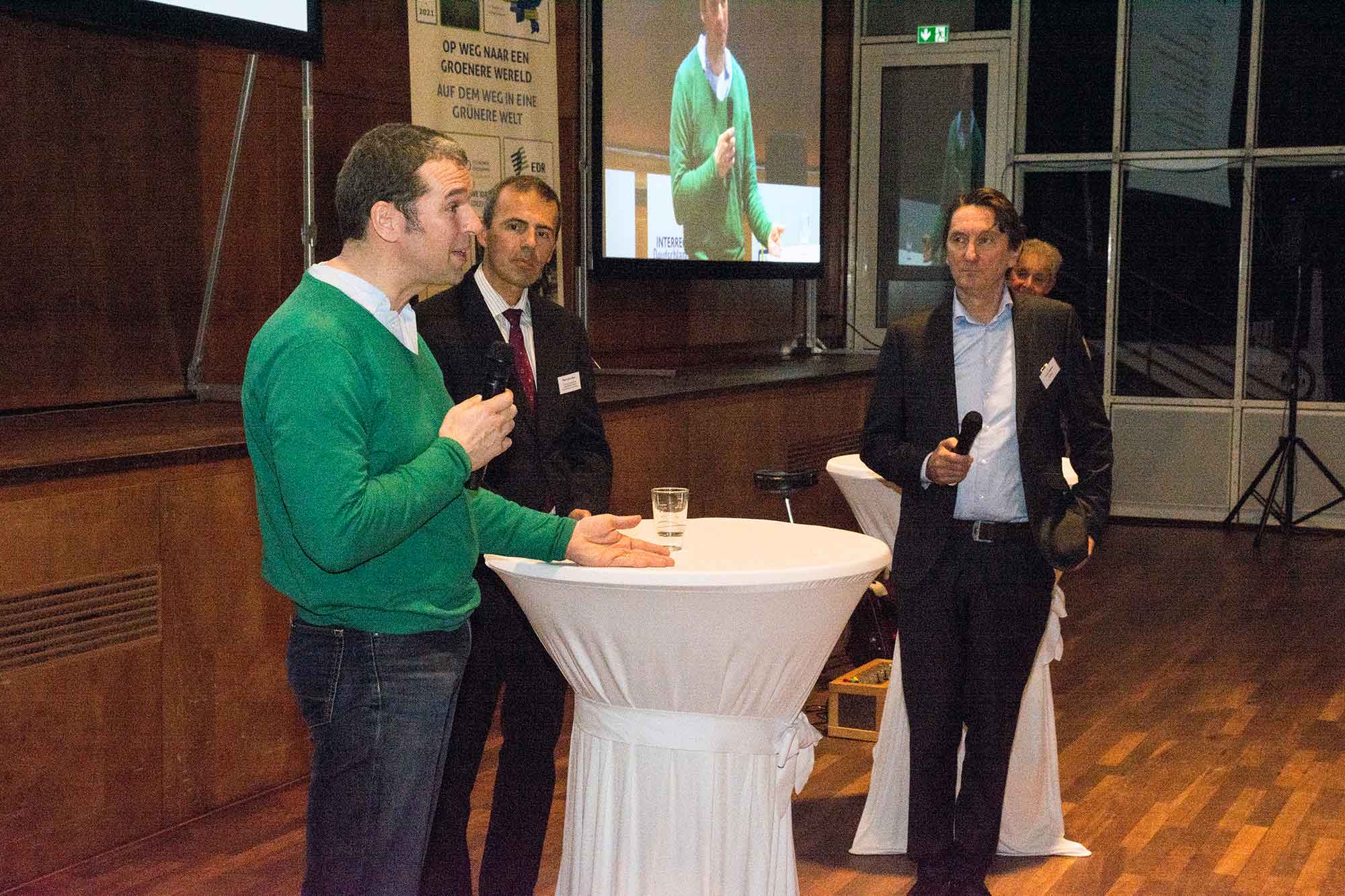 The Northern Netherlands is a prime location for the development of biopolymers, green chemistry and circular…

Limburg has always been an outward-looking province, with intensive border traffic. No wonder: no other Dutch…