No Comments
Read on
‘The larger programme lines of Biobased Delta are gaining increasingly more traction. We can see that in particular at Biorizon, the longest running research programme in which Biobased Delta participates. The other two programmes, Sugar Delta and Redefinery, are still in their infancy but we are making progress there too.’
Lucien Joppen

Rop Zoetemeyer, managing director of Biobased Delta since April 2016, says that the major programme lines in the Delta are developing on schedule. Biobased Delta pays attention to the SME and specific valorisation areas (see article on pages 24 to 26), but is also staking a great deal on green chemistry/biorefinery, with first generation sugars, woody biomass and (household) waste as potential feedstocks.

Delta’s longest-running programme is the development of functionalised bio-aromatics within the Biorizon consortium (which includes VITO, TNO, ECN and companies from the chemical sector).

‘Biorizon, located at the Green Chemistry Campus in Bergen op Zoom, has to break in to the global Top 3 in bio-aromatics within three years. The chance of success is great, all the more so because the consortium is continually expanding with new partners. The announcement by ECN that it intended to participate was a big step. That immediately also broadens the technology platform. After all, the thermocatalytic expertise – pyrolysis, for example – is a wonderful complement to the chemical catalysis and biorefinery which other partners contribute.’

The progress in the Biorizon consortium is also recognised by the partners. At the annual Biorizon event, held at the Green Chemistry Campus, Niklas Meine, Strategic Technology Manager of Covestro (note from the editor: former Bayer MaterialSciences), spoke of ‘unbelievable progress in the past few years.’

Despite the unfavourable oil price of the past few years, the consortium sank its teeth into the development of bio-based routes to concrete applications, according to Meine. ‘The chemical sector is heavily dependent on the petrochemical industry. If the importance of the petrochemical industry declines, bio-based alternatives automatically enter the picture.’
Jan Harm Urbanus (TNO) added: ‘The budget for the research keeps growing, up to a total of EUR 30 million. We have now produced the first samples of functional bio-aromatics. Not surprisingly, interest from the manufacturing industry/chemical sector is growing. The necessary patent applications have also been submitted. The next step is scaling up. The first skids are now being built and will start producing on a multiple-kilogram scale.’

Sugar Delta was established in 2016 and is still at a very early stage. ‘Sugar is all about green chemistry, based on first generation sugar, glucose and – not least – fructose’, according to Zoetemeyer. ‘The area of Southwest Netherlands and Flanders harvests and processes around 6 million tonnes of sugar beet – the equivalent of 2 million tonnes of sugars. This volume will only increase with the revocation of the sugar quota and further yield improvements. Non-food applications will then also come into play more emphatically.’

Biobased Delta wants to develop Sugar Delta along two pathways. ‘First of all we want to attract existing business: companies which produce products like citric acid or lactic acid and do not compete directly with fossil products. We are in discussion with several foreign companies to get them heading towards the Delta.

For the medium term we want to attract businesses which develop products for which there is no fossil alternative. Fructose chemistry in particular is an interesting path to follow, for example in the direction of furans and further to materials. Drop-ins enter the picture in the longer term. Currently they cannot compete with the present oil and sugar prices.’

Redefinery saw the light of day at the end of 2014 and is increasingly taking shape, according to Zoetemeyer. ‘Redefinery is intended to ultimately result in biorefinery on an industrial scale, based on woody biomass. This is then converted into cellulose, C5 sugars and lignin. Lignin can also be used as an energy carrier in the production process and – at a later stage – be directed towards chemistry (including bunker oil, biokerosene or bio-aromatics).

According to the original calculation made by Biobased Delta, this factory would have to run at a capacity of 4 million tonnes per year and a feedstock price (pellets) of between EUR 100 and 160 per tonne (editor’s note: 100 percent dry matter). ‘We are now two years further down the road and it turns out that production based on second generation sugars is also possible at lower wood volumes – say between 500,000 and 700,000 tonnes per year – as demonstrated by the factory of Beta Renewables in Crescentino, Italy. And that is the great thing about the bio-based/circular economy: every day we become wiser thanks to the experiences of other companies and/or projects. With Redefinery, the CAPEX standard for industrial biorefinery is now considerably lower, which increases the chance of a lead investor. We are currently in talks with a French company which wants to build and operate this biorefinery. You need a party like this to create actual activity. Otherwise you get no further than planning.’

Biobased Delta is also expressly seeking international connections. At the start of this year, the Delta signed an agreement with the German Spitzencluster BioEconomy (Saxony-Anhalt), under which the two clusters will strengthen their cooperation. Both initiatives already cooperate in 3BI (with BioVale and IAR).

The two clusters will focus on the themes of biorefinery of lignocellulose, raising the economic value of sugars, increasing the value of lignin to chemistry/materials and design of biocomposites with renewable raw materials.

Willem Sederel signed the agreement for Biobased Delta. ‘The two parties have much to offer to each other. A large chemical cluster has been established in Saxony-Anhalt (editor’s note: Leuna) with larger parties like Arkema and BASF, but also with interesting SME companies. The knowledge within the cluster of the organosolv pretreatment of biomass can be highly useful, because it can lead to milder process steps and thus to better quality lignin alongside cellulose (sugars). Conversely, the necessary expertise has been built up in the Delta on themes such as biocatalysis, bioplastics and biorefinery. Both clusters also have interesting companies which might want to develop technology together, or simply do business.’
Sederel states that the Spitzencluster looks mainly to the west for (technological) cooperation. The German government also supports this development. ‘This region relied traditionally heavily on brown coal. Currently it is oil and gas, but in the long term biomass will acquire a greater role. We are pleased to be able to contribute to this transition.’ 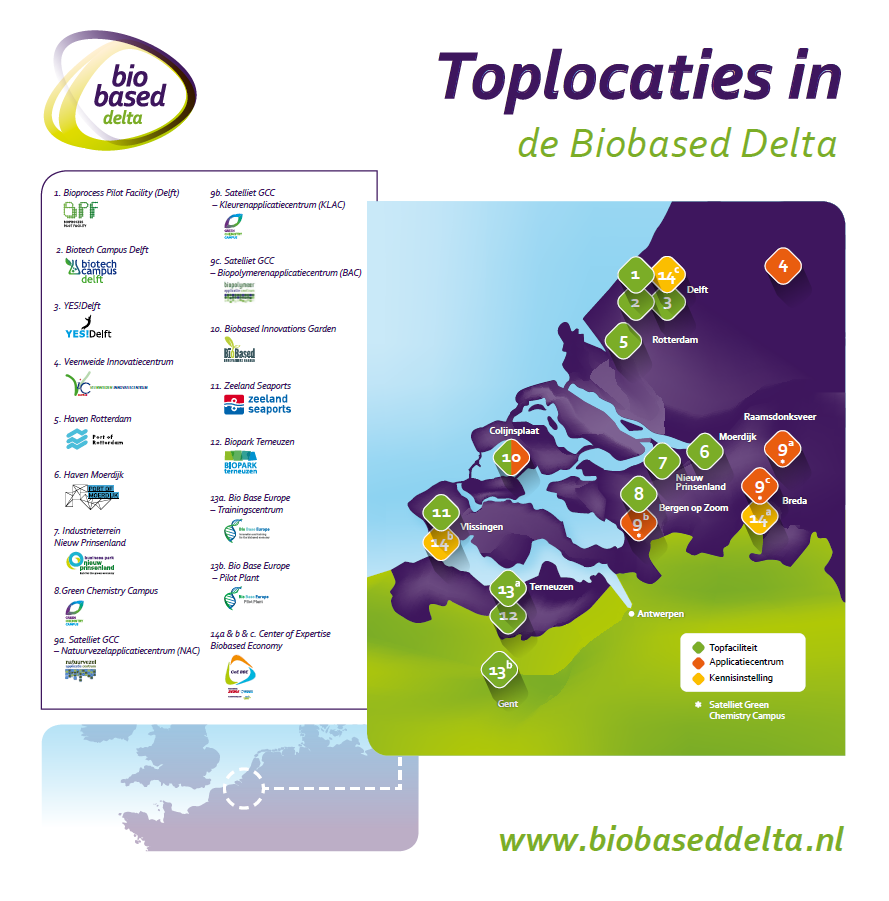 ‘Corbion takes steps in the process for FDCA’

With over 150 visitors, Biorizon Shared Research Centre’s annual event in Antwerp at the end of…

‘Missing link between pilot and commercial’

‘Biobased Delta is not a study club or discussion group, but the missing link in concrete…