The 130 kilometres long network from Lingen to Gelsenkirchen will supply increasing quantities of green hydrogen (H2) to industrial companies in Lower Saxony and North Rhine-Westphalia from late 2022 onwards.

The green hydrogen is to be produced from renewable energies in Lingen, in Lower Saxony, in an 100 MW electrolyser owned by RWE Generation. It will then be transported to industrial customers and refineries in Lingen, Marl and Gelsenkirchen – mainly via existing gas pipelines operated by transmission system operators Nowega and OGE and converted for the transportation of 100 percent hydrogen, but also via a partially new construction by Evonik. 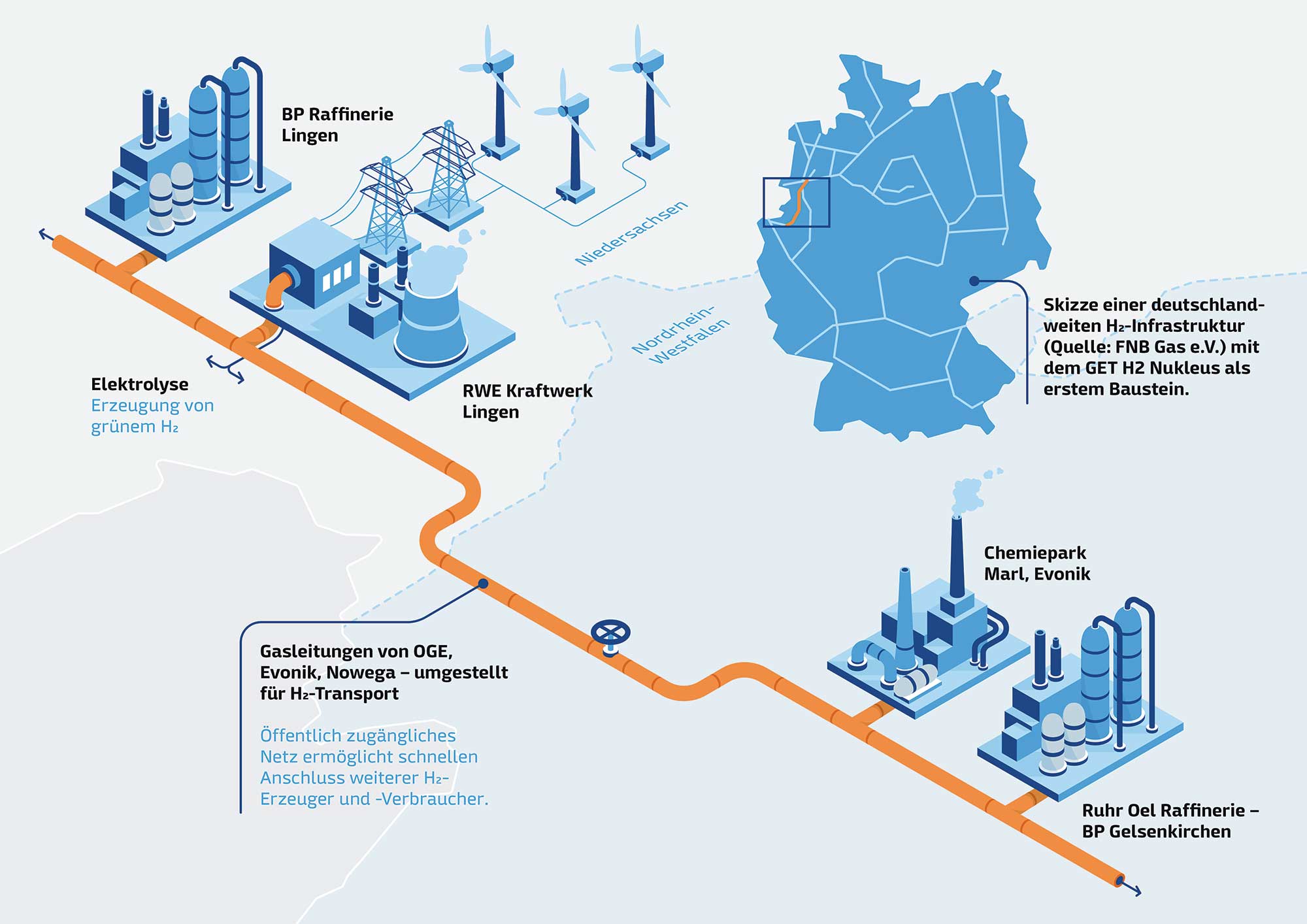 Paving the way for green hydrogen

Transporting hydrogen in dedicated networks has been carried out before in Germany and other European countries for several decades now. So far, however, these networks have been private ones in the industrial sector without any access for outsiders. The GET H2 Nukleus network will be open in a non-discriminatory way to all generators, traders or consumers, as is already the case with power grids and gas networks.

In building such infrastructure, the project partners are paving the way for a sustainable national hydrogen sector and a leading technological role for Germany in it. What is important in the view of the project partners is that politicians should create the necessary legal conditions to enable all companies involved in hydrogen projects to rapidly expand their production of green hydrogen and of the relevant hydrogen infrastructure, as well as providing a secure basis for investment.

In supplying refineries and chemical parks, GET H2 Nukleus kicks in where green hydrogen can make the fastest contribution to a low-carbon future. These companies already use large quantities of hydrogen in their production processes and will significantly reduce their carbon emissions by switching over to green hydrogen. Building up a hydrogen infrastructure based on the existing gas infrastructure will guarantee for industrial customers precisely the security of supplies which they are dependent upon. In the longer term, existing cavern storage facilities along the hydrogen pipeline are to be incorporated which will further increase this security of supplies.

Circular use of soil, stone and gravel can save Europe €6 billion a year

Brainstorm DeGrowth Will Save The World

Energy company RWE has joined NortH2 as a project partner, one of the most ambitious hydrogen…