No Comments
Read on
The sugar fermentation study by Deloitte resulted in pleased reactions in ‘Biobased Netherlands’ at the end of 2014, as it showed the potential of the Netherlands in a powerful international playing field. The study was recently followed up by a new report, also by Deloitte, concerning the strengths and weaknesses of the Biobased Delta (see box).
Edwin van Gastel

Meanwhile, Biobased Delta has picked up the gauntlet and decided on a campaign plan. An action document, under the denominator ‘Internal Agenda’ forms the guiding principle for cashing in on the opportunities. A discussion with Willem Sederel (Biobased Delta), Willem Vaessen (Deloitte), and Albert Markusse (Suiker Unie).
Willem Vaessen, director at Deloitte Consulting, was in charge of drawing up the report evaluating the Biobased Delta. ‘With the study we show that the region is eminently positioned in the area of biobased raw materials, products, and biorefinery. Is that news? No. The reason is that while our fermentation study (editor’s note, published in September 2014) also produced surprising results for insiders, this is not the case now. However, it is new to investors and international stakeholders in the biobased economy from outside the region. For them the Biobased Delta has been put on the map.’
‘The results of the report confirm the excellent starting position of the region,’ Willem Sederel (Biobased Delta Managing Director) also declares with satisfaction. ‘What especially stands out as a distinguishing strength is the availability of biomass because of our own raw material position based on sugar beets and other imported biomass flows in the deep sea ports. This is of great importance because in the next five years the decision will be made regarding the regions and clusters in the world where large-scale biobased economy will be established in the next few decades. We cannot be ignored because of the huge strengths we have.’

According to Sederel, the next few years will be the time to quickly convert the opportunities into concrete and feasible business cases. ‘That must result in more process capacity for green building blocks, using biocatalysis (enzymatic conversion and fermentation) as well as greener chemical catalysis where great progress is still being made. The building blocks serve to produce the right sustainable products and materials for brand owners who ask for these. This creates demand-driven development of new value chains that form the basis of the new biobased economy.’
Sederel is aware that the Deloitte report also shows that there is still room for improvement. ‘There is still much that needs to be done, especially in the area of the labour market, training new people for the next economy. The same applies to regulation: unnecessary barriers must be removed, the demand must be stimulated, and a level playing field will have to be created.’

Vaessen for his part is planning to share the study widely on an international scale. ‘And that starts at our own company. Deloitte employs more than 200,000 people, and our company is active in numerous sectors. Not only in the agricultural sector, but also in chemistry and at brand owners such as Nike, Procter & Gamble, and IKEA. I recently drew the attention of the latter company to the results of the study because they are spending a great deal of time on a very ambitious programme to change over to using 100 percent biobased and recycled materials. The Biobased Delta, as a region, is the classic example of an ecosystem. In the past few years, clusters of companies were formed that collaborate in the biobased economy. At the same time the report shows that it is important to get a move on. For example, right before the summer break we sat down with a number of enterprises, including Clariant, DSM, KWS, SABIC, and Suiker Unie, and together we examined two specific important chemicals. The objective? Taking the step towards creating a good business case and production capacity for biorefinery together with small and medium-sized enterprises such as Novomer and GI Dynamics.’
Vaessen also mentions the ‘Internal Agenda,’ a document drawn up by the stakeholders in the Biobased Delta as a result of the Deloitte report. ‘The parties have used the document to ask themselves “Now what?” A good starting position is fine after all, but now it is important to cash in on it. Five themes have been formulated to this end: optimising internal cooperatives; elaborating business cases; government involvement; the production capacity; and linking various green building blocks. Serious progress has already been made on the first item, and I furthermore believe the fourth and fifth items to be very important. As a region, the Biobased Delta does currently have the pilot plants in Delft and Gent available for fermentation development. This means that companies do not have to have their beet pulp or juice validated in Canada or the United States, for example, to certify that the micro-organisms are able to make the right product. However, creating sufficient commercial production capacity is crucial if one does not want to miss the boat. With regard to linking and reinforcing various innovative building blocks, diverse parties will have to get together in order to optimise the three major steps (preprocessing, conversion/fermentation, and recovery) as a whole. That way you can end up with a sound business case.’

’There must be one strong initiator in that framework, because everyone has his own agenda,’ Vaessen concludes. ‘That could be Cargill, DSM, SABIC, or a different company saying: “We want to take the step towards large-scale production for the biobased economy.” You can then set up a good business case together fairly quickly. In the case of biorefinery, that will involve a plant with multiple inputs and outputs The vision of a single product facility, with a biomass flow and a final product, has been moved to the long term agenda. Even though you have to elaborate the business case per product case, you must eventually move towards biorefinery with a few products available in higher volumes and a few products with a higher added value. In the traditional petrochemical industry one also started at 0 and went through an enormous learning curve thanks to process integration and process intensification, among other things. This will also happen in biorefinery. As far as that is concerned, the region can be satisfied if in the next 2 to 3 years a consortium led by a company such as SABIC, Cargill, or IKEA is formed, the business case is formulated and one is ready to realise the actual investments.’

‘The Biobased Delta – Where agro meets chemistry’ in brief

Deloitte has sorted out four likely ‘sugar regions’ in the report ‘Biobased Delta, a globally competitive region for developing biobased business’: Northwest Europe, the United States, Thailand, and Brazil. The report ensues from the previous fermentation study (September 2014), in which Deloitte studied the competitive position of crops in Northwest Europe on the international market for products obtained through fermentation.
In the latest report, Deloitte compares the Netherlands, Belgium, France, and Germany as well as the clusters Biobased Delta, North Rhine-Westphalia, and Northern France. The Biobased Delta scores well in the report on the six criteria used, while the Netherlands failed to get the top score only on components 2 and 5 (knowledge infrastructure and labour market) (see graph):

The Netherlands, global leader in biobased according to Deloitte. In a comparison of the big European clusters, a neck and neck race is going on between Biobased Delta and North Rhine-Westphalia.

Albert Markusse, Suiker Unie CEO, shows his satisfaction with the result of the latest Deloitte study. ‘I am pleased that an increasing number of parties is aware of the opportunities of biobased development in Southwest Netherlands. The basic infrastructure is in place and is actually fantastic. There are chemical technology, agricultural business, training institutes, and research institutes. One for one these are factors that can contribute to the biobased economy. Moreover, the companies and other stakeholders are willing to collaborate, integrated, but also on a bilateral and project basis.’
Markusse is also pleased that the interest of the chemical industry in the sugar molecule is increasing. ‘We have been using sugar in the food sector for hundreds of years and we expect the chemical sector to regard the sugar molecule as a raw material more and more. It is positive that the government is stimulating these developments. I hope the government will also contribute to attracting a big launching customer to the region in order to thereby make the flywheel turn. Cosun and Suiker Unie also are aware of the opportunities and are willing to participate in the investments.’ 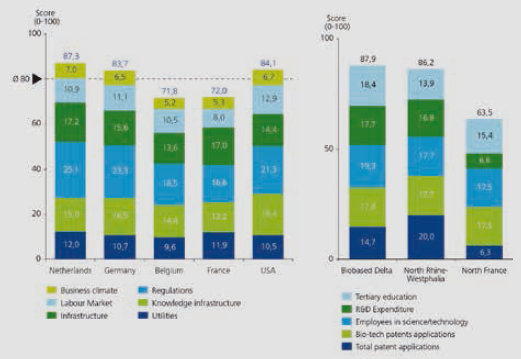 The Netherlands, global leader in biobased according to Deloitte. In a comparison of the big European clusters, a neck and neck race is going on between Biobased Delta and North Rhine-Westphalia.

This article was created in collaboration with Biobased Delta.

Edwin van Gastel
This author has no description
Related posts
04:54

‘The larger programme lines of Biobased Delta are gaining increasingly more traction. We can see that…

In the Biobased Delta, authorities from the provinces of Zeeland, North Brabant and South Holland work…