No Comments
Read on
Many holidaymakers know the feeling: the relief when you cross the border after a long journey and drive onto the Dutch motorway. Rarely does that comfortable road surface evoke warmer feelings than at such a moment. But when nature is required to give way to motorways, asphalt seems blacker than ever: made of boiling bitumen and rubble and churned in energy-guzzling, smelly asphalt mixers.
Pierre Gielen

And yet things are slowly starting to change. A new future is emerging for ‘green’ asphalt: roads that have replaced fossil oil and chemicals with vegetable and circular raw materials. Thanks in part to biobased chemistry, the greening of road construction is forging ahead. And the field of green chemistry is precisely the area of expertise of Chemport Europe in the north of the Netherlands.

One of the most interesting innovations at present is the replacement of petroleum-based bitumen with organic lignin. Lignin is the ‘glue’ that holds plant fibres together in woody plants and can fulfil the same function in asphalt. Dozens of organisations throughout the road construction chain, from raw material producers and road builders to road operators, are researching the application of lignin as part of the CHAPLIN programme.

Roelofs, a company in Stadskanaal in the Northern Netherlands, was one of the parties involved in this project from the start. A few weeks ago, the company laid a test section of the provincial road in Siddeburen with lignin-containing asphalt, near the location of green chemical company Avantium in the Delfzijl Chemical Park.

Marco Kok, Asphalt & Technology manager at Roelofs: ‘We have been working on circularity in road construction for a long time with the reuse of asphalt. We see that bitumen is becoming increasingly scarce and of lower quality. This, in combination with the need to reduce CO2 emissions, led us to start recycling. Even bitumen from old roofing material or milled asphalt (debris from worn road surfaces being replaced, ed.) is often of better quality than new bitumen. However, for a more sustainable solution, we are looking for an alternative, preferably a 100% biobased replacement.’

Lignin is a good candidate for this, as it occurs abundantly in nature and often remains as a residual product in biorefinery processes. And this is the case at Avantium, for example, which built a pilot plant for its DAWN Technology in Delfzijl. ‘This technology is used to extract industrial sugars from wood waste from nature reserves managed by Staatsbosbeheer. These sugars are used as a building block for chemical technology, for producing biobased plastics, for example, like PEF,’ explains Avantium spokesperson Caroline van Reedt Dordtland. ‘The lignin that remains can be used in the RWE power plant, for example, to generate energy. But it can also be used for more beneficial applications, such as for replacing bitumen in asphalt. That is an interesting target market for us, partly because of its large size.’

The wood chips are always screened as an initial step in the production process. ‘We sometimes come across an occasional pine cone, but the quality is consistent enough for our process to produce industrial sugars for the chemical industry and lignin for bioasphalt.’

The quantities of lignin produced in the Avantium pilot plant are still relatively small. But this can change if the company builds a commercial DAWN factory in the future. In addition, lignin is also becoming available from other sources, such as from elephant grass, which the contractor NTP uses to make ‘Grasfalt’, and as a residual product from Scandinavian pulp and paper factories used by road builder H4A. As availability increases, the raw material may also become cheaper.

Thanks to the ECI methodology that the government employs with large tenders, a biobased product can also quickly become more attractive than a cheaper, but less sustainable, fossil-based solution. ECI stands for Environmental Cost Indicator and unites relevant environmental impacts into a single score of environmental costs: on paper, a smaller environmental impact means lower costs.

And, in this case, sustainability is certainly not an issue. The raw material is not only renewable and a residual product, but it also requires less energy to produce bioasphalt, because this can be done at lower production temperatures. It saves a lot of natural gas in the asphalt production plant, which in time may even be electrified.

‘Currently, we are still in the testing phase,’ says asphalt specialist Albertus Steenbergen at Roelofs, which is collaborating on innovation with about ten road builders and shares lab facilities at the Asphalt Knowledge Centre (AKC). ‘Lignin in the asphalt plant behaves differently than in the lab. How does it mix, how do you transport it, how do you transfer it properly into the asphalt machine and how does it behave in practice? That is what we are currently investigating by laying test sections throughout the country.’

Has anything been revealed from the tests so far? ‘Seven years ago, H4A laid the first test section in Zeeland: the access road to their own asphalt plant. It is still in good condition. Roelofs also laid cycle paths in Wageningen five years ago using various types of lignin at higher percentages. These, too, are holding up well. Now we are testing several provincial and industrial roads that are subject to higher loads. But we have also tested the application of lignin in various layers: first only the surface layer, then the intermediate and bottom layers, with and without PR (partial recycling, ed.). Each layer has its own properties.’

It is looking increasingly likely that we will be driving on bioasphalt roads sooner or later. Albertus Steenbergen: ‘Current technology enables us to replace up to 50% of the bitumen with lignin. But I am convinced that it will be possible to make bitumen-free asphalt within the next five years. We believe in a biobased solution.’

Clients like the provincial and municipal authorities are clearly open to the idea. This means that one important hurdle has already cleared, according to Marco Kok, commercial manager at Roelofs: ‘The province of Groningen was very eager to designate a location. And the municipality of Groningen and Groningen Seaports are also working with us. So there is sufficient support. This is because, as road operators, they also recognise the necessity to find alternatives to fossil bitumen, even though there may be risks involved with new technology. By working together, we can absorb the risks and make it all feasible.’

These articles were created in collaboration with Chemport Europe. 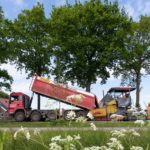 This broad coalition is important. Albertus Steenbergen (Roelofs/AKC): ‘If we want to develop a useful alternative to bitumen that will actually be used, it is essential that clients are also on board. That is a complicated process, because it means that the specifications in a tender need to be formulated on the basis of functional requirements, instead of prescribing asphalt with bitumen. It creates uncertainty and therefore people get cold feet. That is why it is fantastic that the entire chain is involved with CHAPLIN, including Rijkswaterstaat. And this is often seen as important for other parties, even though the process to get something approved can sometimes be very long.’

‘There are open innovation and joint investment within CHAPLIN. This means that knowledge and experience are actually shared, just like in the AKC. As a result, we are seen as global leaders in innovations in this area. And there is huge interest from abroad in lignin-based asphalt. In Scandinavia, for example, where they are also doing research and are working on these innovations. However, in the Netherlands we are much further along. We achieve more by cooperating!’

At home in the Northern Netherlands 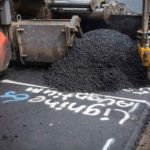 Avantium, originally an Amsterdam-based company, feels completely at home in the Northern Netherlands. Spokesperson Caroline van Reedt: “Chemport Europe has expressed the ambition to become a leader in the field of green chemistry and reducing CO2 emissions. It supports a circular economy without fossil raw materials. These are not just words; you can also see it in their actions. The entire Chemport Europe network is focused on green chemistry, our core business. They have also supported us in obtaining subsidies for several technologies. We also consider it very important that we have access to a sea port from Delfzijl and that there is a lot of good labour in the Northern provinces. The Province of Groningen has also shown its willingness to roll up its sleeves. For example, the test section with lignin-containing asphalt was made possible by the province. That certainly shows ambition!

From roof to road 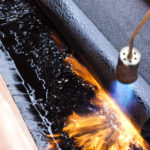 It will take some time before bioasphalt is fully marketable or is even stipulated by clients in the specifications. Recycling old asphalt has been used for some time. Now, there is another possibility: the reclamation of bitumen from old roofing material. Roelofs is working on this as part of the Roof2Road initiative together with Dura Vermeer, H4A, Ooms Producten (Strukton) and Reinten Infra.

Marco Kok: ‘When buildings are demolished or renovated, a lot of usable, old roofing becomes available. Normally this would be sent to the waste incinerator, even though it is a high-quality raw material that can be easily processed. And because of the scarcity of new bitumen, we can put it to good use in the asphalt industry.’

Albertus Steenbergen adds: ‘Roofing material is thin, but needs to be flexible and therefore contains high percentages of modified bitumen. By using this as a circular raw material, we increase the quality of the asphalt and extend its useful life.’ 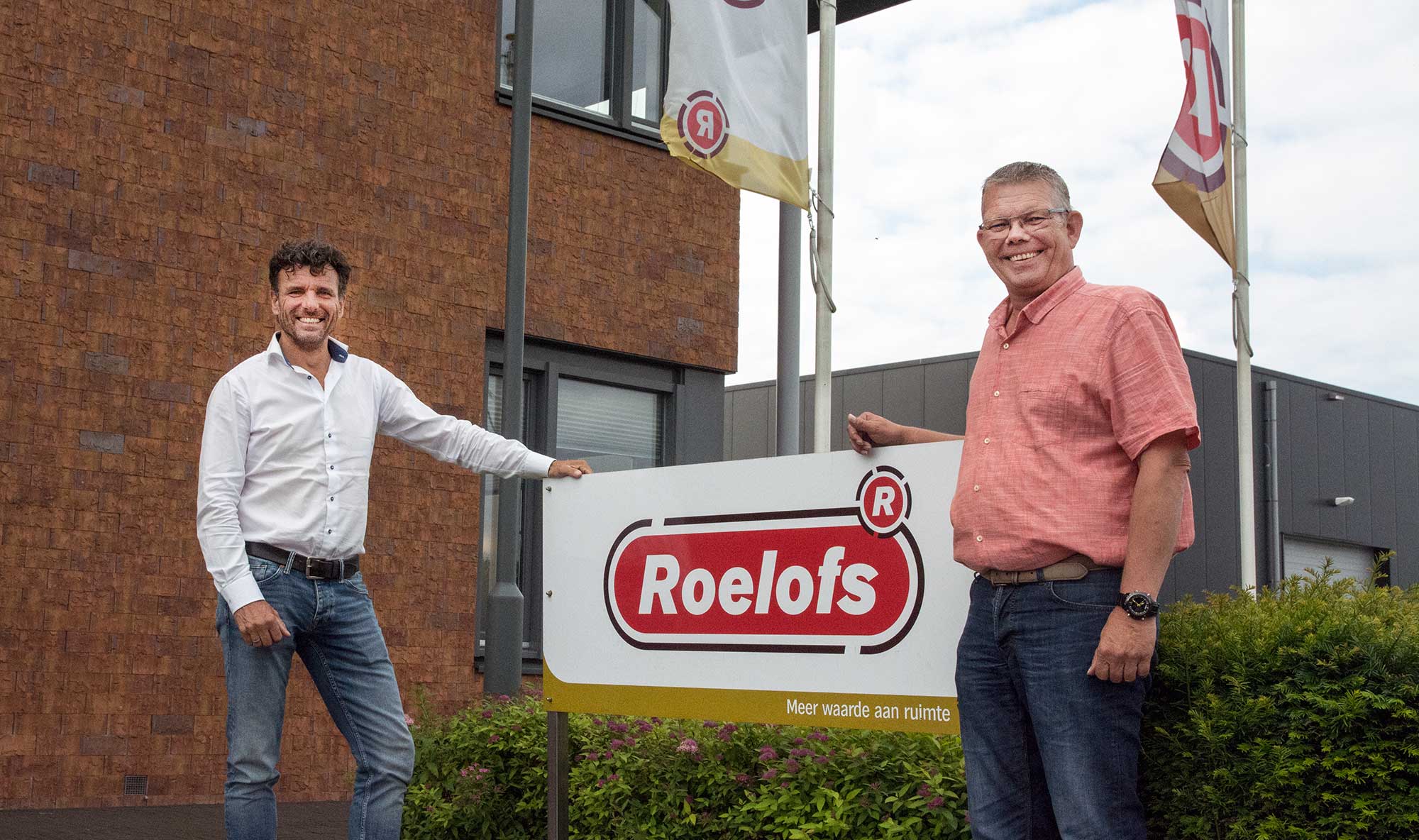 Fish show how to measure flow

Traditional asphalt consists of a mixture of rubble, sand, aggregate and bitumen. These materials are mixed…

Can you make asphalt even more sustainable and if possible even CO2-negative? Yes, you can, as…