No Comments
Read on
From fashion accessories to carpets to complete dresses: these are the tangible results of the European Pure Nature - 100% Biobased (BB100) project. They were presented during a final event at the Textielmuseum in Tilburg, The Netherlands.
Editorial office / Tilburg

In the BB100 project, the business community worked for four years together with knowledge institutions on research into biopolymers for textiles, new biobased additives and methods for measuring sustainability. The challenge is urgent: the global textile industry uses no less than 98 million tonnes of non-renewable raw materials every year. The production of a single pair of jeans costs 4,000 litres of water and produces 33 kg of CO2 emissions. In low-cost production countries, harmful chemicals and dyes sometimes simply disappear into the soil or surface waters. Textile waste is hardly ever recycled. And this sector is also threatened by a shortage of raw materials, since production will double by 2050 due to increasing demand.

Yarns from biopolymers are a possible solution to at least part of the problem. In addition, numerous additives are needed, for example coatings, dyes and flame retardants. Willem Uyttendaele worked on these at the Belgian research organisation Centexbel. By mixing PLA or PHA with water and a plasticiser and heating them, a homogeneous layer could be made that is rather flexible, UV-stable and resistant to mechanical wear. With this material, textiles can be both coated and printed. By using plasticisers that can withstand temperatures of 110 to 150 degrees, a hot-melt coating could also be developed. According to the researcher, these coatings are relatively ready for the market: various partners have already applied them and are looking for commercialisation.

Meanwhile, a wide range of bio-based dyes is also available, but the light fastness over time is still an issue that needs attention. More research is also needed in the field of bio-based flame retardants. The test results are promising, but the effectiveness declines when the textile ages. Uyttendaele emphasized that the closure of BB100 does not mean the end of the development of these biobased products for Centexbel: “We continue to work on biobased coatings and prints for e.g. packaging and clothing in several European projects. We are open to cooperation with industrial partners.”

Liset Pander of the open innovation centre Texperium (specialised in ‘high performance reprocessing’ of textiles) discussed via video the challenges of mechanically recycling PLA fibres into open-end yarns. This was done by machine shredding, carding and spinning. The first problem that arose was that the machines could not run at full speed. They became quite hot, which caused the PLA fibres to melt. “It meant that we could only process the fibres at one third of our normal production speed. We hope that in the future there will be PLA qualities on the market that allow us to process them at full speed.” Weaknesses also occurred in the carding process and spinning also led to a lot of yarn breakage due to problems with temperature regulation, causing both the fibres and the spin coat to melt and jam.

Chemical recycling may be a better solution. According to circular entrepreneur Josse Kunst of ARAPAHA (interior products), the ‘polyester rejuvenation process’ of the company CuRe Technology, where he is CCO, would be a good solution for large-scale textile recycling. This is also the method that ARAPAHA is going to use for its developed in the BB100 project of a carpet made entirely of PLA; the first in the world.

Traditional carpet is a complex product consisting of many layers of different materials. Usually, these are also non-degradable fossil plastics. This makes it difficult to recycle. In Europe, at least 97 percent of all carpets thrown away end up in landfills or incinerators. “Together, all the carpets thrown away every year weigh as much as 160 Eiffel Towers. That is absurd. We need to radically change our thinking. If we could replace all carpets in Europe with our 100% bio-based carpets and recycle them, we could save 6 million tonnes of CO2 emissions per year.”

The Pure Nature: 100% Biobased project was funded within the Interreg V Flanders-Netherlands programme, the cross-border cooperation programme with financial support from the European Regional Development Fund (ERDF). Participants were the Aachen-Maastricht Institute for Biobased Materials (AMIBM, coordinator), the Belgian technical and scientific centre for the textile industry Centexbel, the Centre of Expertise Biobased Economy (Avans and HZ), the Texperium and the International Fibres Group (IFG). 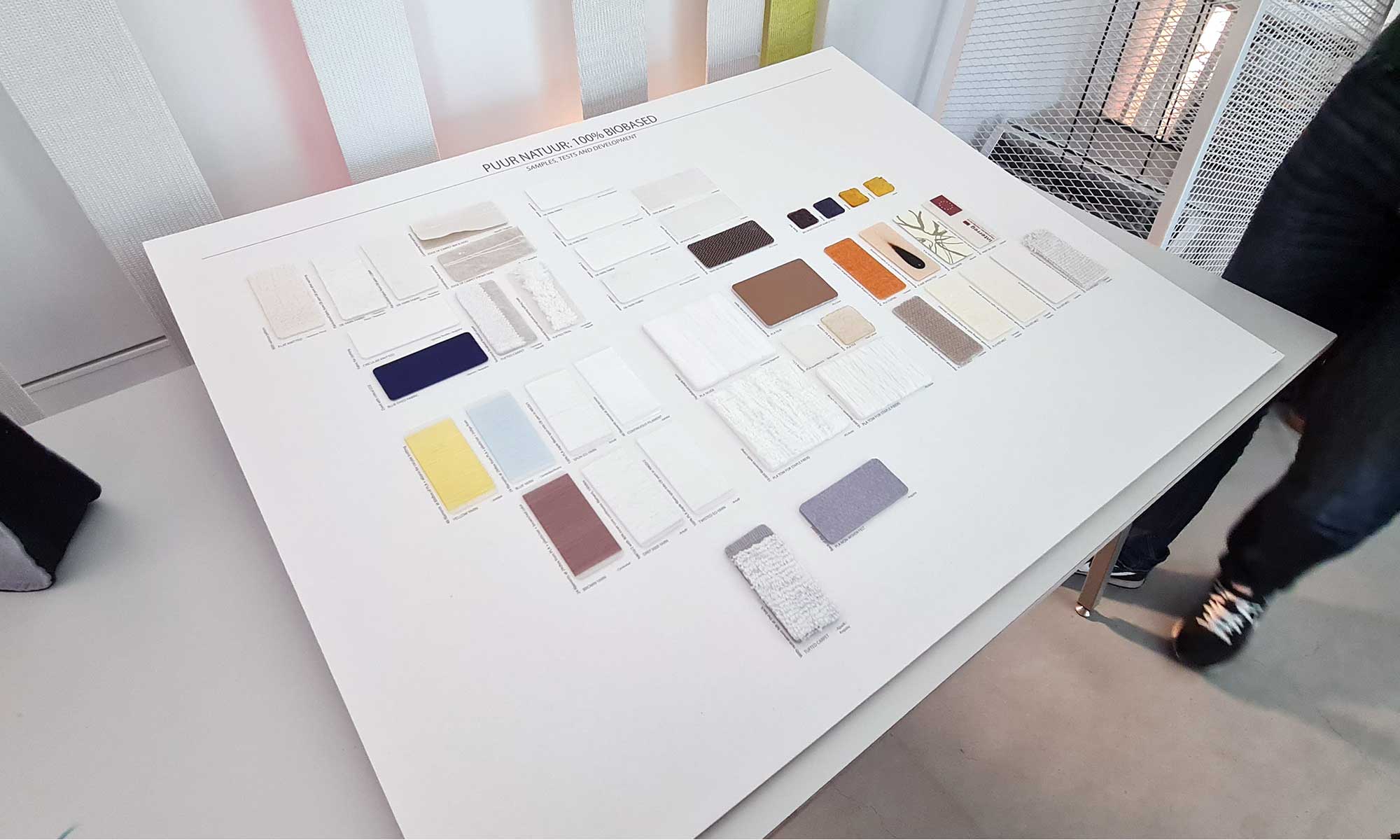 Circular use of soil, stone and gravel can save Europe €6 billion a year

Brainstorm DeGrowth Will Save The World

On Thursday 2 December, the Textielmuseum Tilburg will host the closing event of the Pure Nature:…

Sustainable fashion from the sea

The clothing industry causes 8% of all CO2 emissions worldwide: more than all aviation and shipping…