Low inertia of biobased polyester is ideal for biomedical materials

3D printing with PLA can become more precise and stronger

No Comments
Read on
3D printing sounds like the perfect technology to produce complex objects as tailored single units; from machine components to implants for damaged tissue. By using the compostable biobased plastic PLA, this process also becomes sustainable. PLA, or poly(lactide), is synthesised from the natural monomer lactic acid. That sounds perfect, but such objects often retain their shape less well or are less strong mechanically, whilst design freedom is one of the strengths of 3D printing. Why is that?
Pierre Gielen

Jules Harings, assistant professor at the Aachen-Maastricht Institute for Biobased Materials (AMIBM) is specialised in studying the behaviour of polymers at a molecular level. When he started as a researcher at Maastricht University five years ago, he was asked about his personal vision regarding 3D printing with thermoplasts. Following on from this, he started conducting research into the behaviour and performance of PLA in 3D printing. At the time, most of the “filaments” for the 3D printer consisted of this biopolymer produced from lactic acid. During the printing process, such a filament is guided through a heated printer head. This nozzle or the printer bed moves in the horizontal direction during the printing process, so that an object is constructed layer by layer. This is also referred to as additive manufacturing. This is a slow process, but the 3D printer does offer extreme design freedom; you can make shapes that would otherwise not be possible.

The fact that the object is constructed layer by layer does have an effect on the mechanical properties, such as the strength and rigidity of the final product. Harings was initially not impressed by this. “People expect a 3D printed object to be just as good as the same object from the injection mould. That is not the case. If I put down a layer that hardens and then place the next layer over that, this does not necessarily mean that both layers are mixed at a molecular level. The boundary between the layers will be weak and can never perform like a homogeneous material that is injection moulded.”

Polymers respond differently in this regard than, for example, metals. A drop of molten metal that falls onto a solidified layer will cause this layer to partially melt again. The result is that the atoms mix to form a new whole. This is called molecular diffusion. Welding works in approximately the same way. But in the case of polymers, the atoms are linked together in long chains. This means that the fusion processes take place much more slowly. “You need to take this time scale into consideration.”

The crystallisation speed of polymers forms an additional problem. The density of the material changes when it moves from the liquid to the solid state: it shrinks. “If the different layers crystallise at different times, this can cause distortion of the product. In the case of polypropylene, this happens during the printing process. PLA crystallises more slowly, but shrinks at a later stage and is also not homogeneous, because each layer is different.”

In research subsidised by SIA/RAAK and in collaboration with Zuyd University of Applied Sciences, Harings studied how various processes of crystallisation and molecular diffusion can be controlled by chemically changing the properties of PLA. “This can result in differences in the crystallisation of PLA grades with varying ratios of L and D enantiomers. The molar mass, which we use to control the viscosity and diffusion speed, also has an effect on this. Ultimately, we need to exactly match the time scales of molecular diffusion and crystallisation in the three-dimensional volume of the printed product.

The next step is to influence the local mechanical properties whilst retaining shape stability by varying the physical parameters during the printing process, such as the speed and/or temperature of the printer head. This makes it possible to direct variations in an object and thereby change, for example, the porosity at a local level, without changing the printer material.

This is useful, for example, in the printing of medical scaffolds: temporary implants to which stem cells are applied in the human body, so that various new tissues can grow from there.

Mechanical elements in the body are usually not isotropic. For example, the local stiffness of bone varies and collagen filaments run through the bone in certain directions to provide extra strength. Variations in the scaffold porosity and roughness of the material also affect the attachment of cells to the surface. Research suggests that the way in which stem cells develop after attachment depends on the local porosity and surface strength of the scaffold.

Jules Harings: “So we are now looking at whether we can use this technology to use the intrinsic differential structure of 3D printing to create scaffolds in such a way that we can control the cell interaction and cell development, for an improved healing process, without using composites.”

“Of course it is also important to select the correct polymer, that biodegrades at the correct speed, so that the tissue growth and the breakdown of the scaffold match each other. The scaffold initially plays a role that the tissue must take over as it develops. If there is a mismatch in the mechanics, the tissue will not recover optimally. I have broken my elbow a few times whilst skateboarding. Each time it was repaired with a cast, an isotropic material that is mechanically over-dimensioned, as is the case for recovery using a pin. As a result, the bone carries less weight during the recovery process and the recovering tissue is not really trained. It will never function like it used to. We want to avoid this.”

In this research, AMIBM works together with Zuyd University of Applied Sciences and professor Lorenzo Moroni from MERLN, the Institute for Technology-Inspired Regenerative Medicine at the University Medical Centre Maastricht. PLA manufacturer Purac Corbion supplies the required medical grade PLA.

Harings hopes to publish their initial findings soon. He has now let go of his initial reservations about PLA in 3D printing. “I am enthusiastic. It is a good material to study. The concepts that we have now designed to manipulate the material properties physically – not only for biomedical, but also for technical applications – started as a Friday afternoon experiment. Some colleagues in the research group did not believe that it would work. And if it does work after all, that is a fantastic moment. That gives us the spark to continue!

This article was created in cooperation with Source B 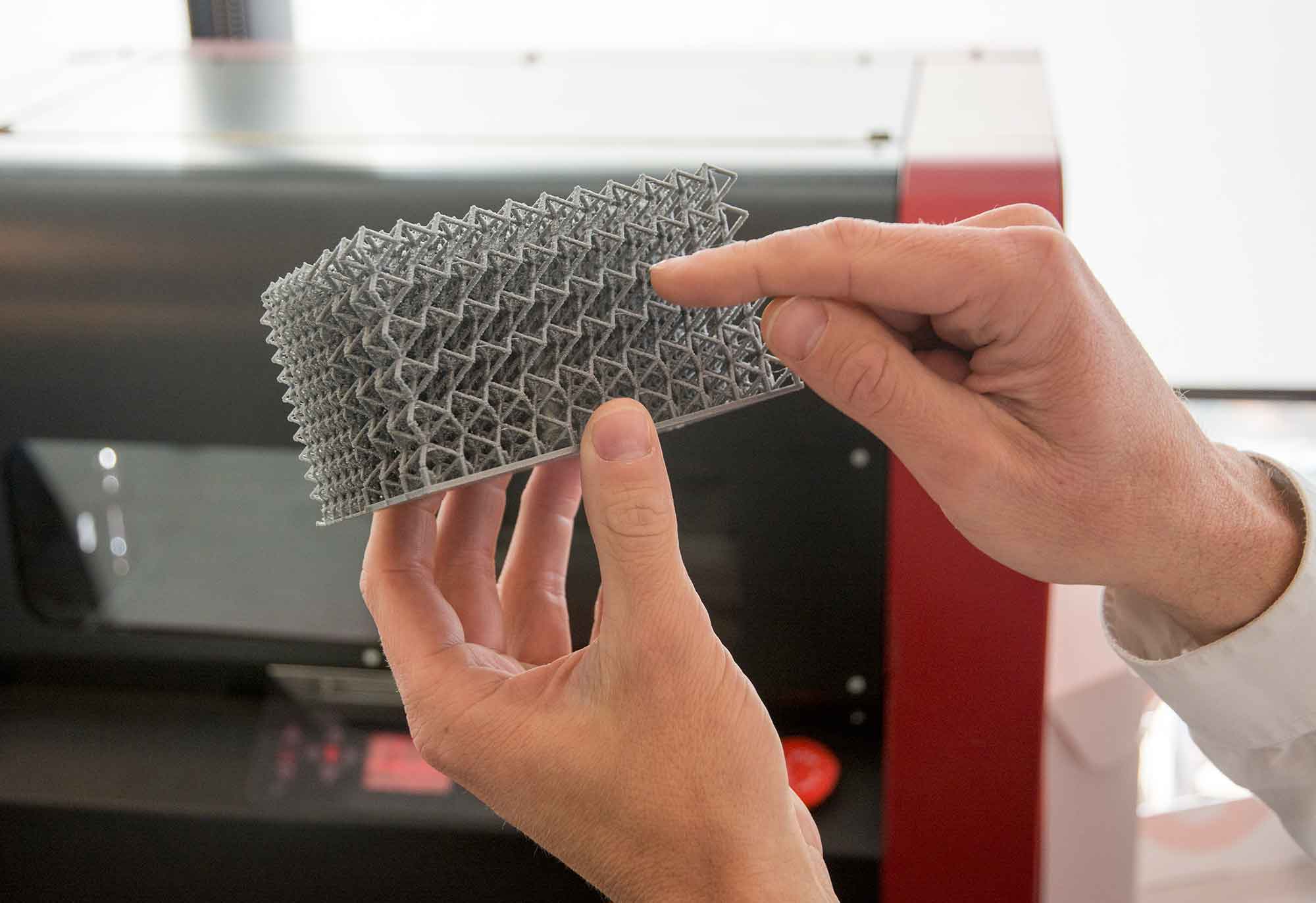 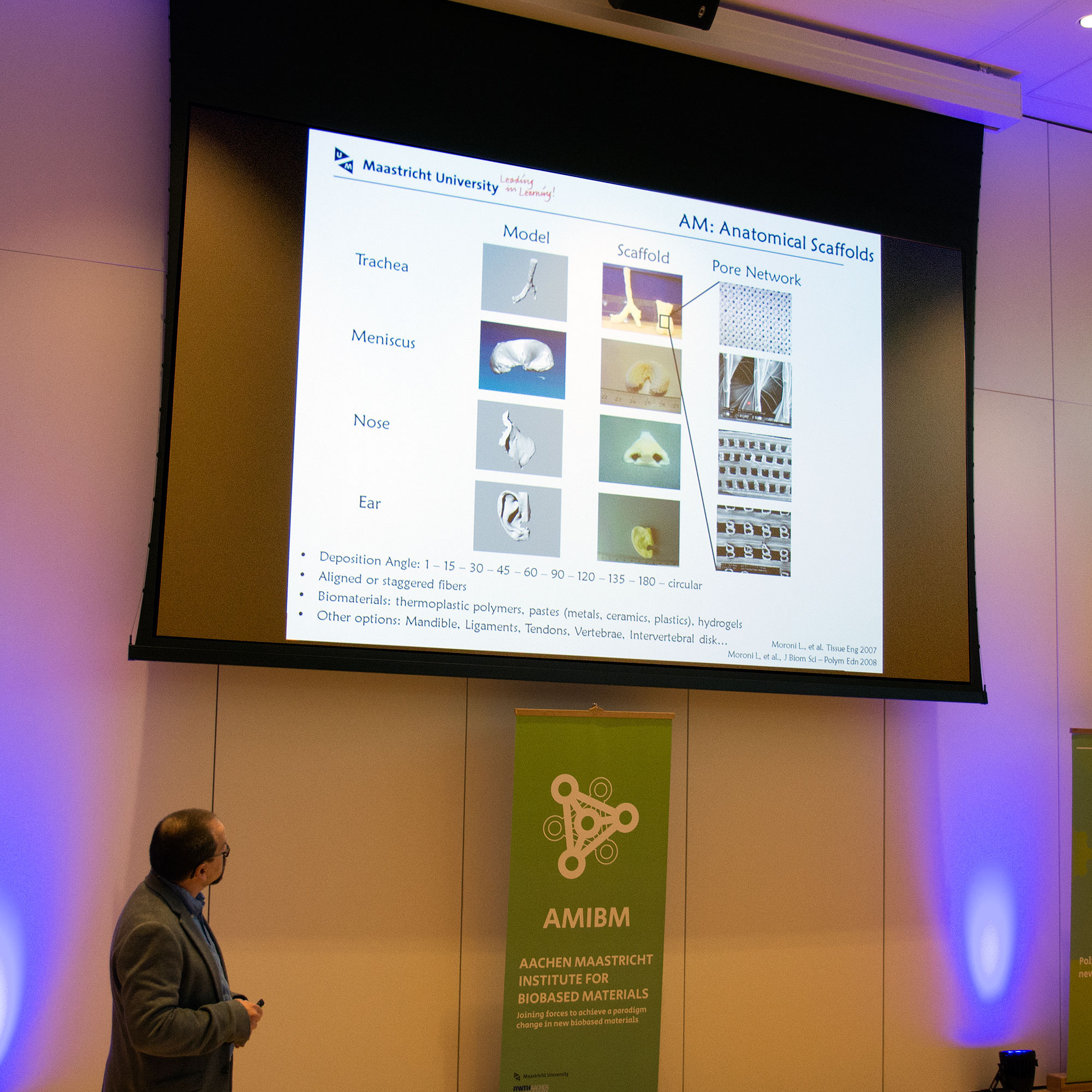 Lorenzo Moroni at the ABC Conference 2018

For more and more fossil plastics, there are green alternatives. For example, 3D printer filaments from…

Imagine you could get tobacco plants to make elastin-like proteins with the properties of spider silk.…

Distinction based on functionality

A large share of biomedical materials is based on fossil resources and metals, but biobased biomedical…