No Comments
Read on
Around ten years ago, Rob Vasbinder decided to become self-sufficient where renewable energy was concerned. After having explored all the options, he decided upon the pyrolysis of biomass and a supply by means of a forest he purchased. Currently, his company Nettenergy is also investigating other products that may be produced using the pyrolysis process.
Lucien Joppen

‘Actually, wood – and particularly the low-quality pine wood grown on my parcel in Putte, in the southern Dutch province of Noord-Brabant – is not a good investment’, Vasbinder stated in his home office in Boskoop, in the province of Zuid-Holland. ‘The costs involved to get the wood from the land are high, and virtually equal the income. The wood could be burnt in an open fireplace, but, that way, one would make sub-optimum use of its energetic value. I considered pyrolysation of the wood to be a better investment. The resulting pyrolysis oil also provides by-products, such as wood vinegar and biochar.’

However, preconditions include the scale on which pyrolysis is to take place and the quality of the end product: the resulting pyrolysis oil had to be dryer than regular pyrolysis oil. Small-scale and mobile pyrolysis was relatively unknown in those days. Yet Vasbinder, armed with numerous manuals, was determined to find a way.

‘My background lies in process technology; more specifically, in Chemical Engineering (Delft University of Technology). Furthermore, I am blessed with two right hands. I also had the time to develop a mobile installation, because I had just spent a number of lucrative years in Saudi Arabia as a freelancer optimising the performance of ethylene plants. Naturally, I did not just develop the installation for my own use, but also with an eye on the global market. Whereas other companies aim at developing central pyrolysis installations costing over 15 million, I intended to devise a more economical, decentralised one – particularly useful in third-world countries. Moreover, I wanted to achieve a better end product.’

Normally, pyrolysis oil contains between 20 and 30 percent water, which is why it had never been suitable for engines and burners. Thanks to the PyroFlash technology developed by Vasbinder, the equipment not only produces dry oil with only 3 percent water, but other fractions as well, including biochar, wood vinegar, and wood gas. The wood gas is used immediately to make the entire installation autonomous. No electricity or fuel is needed. A unique selling point, says Vasbinder.

Vasbinder is not ready to disclose many details about the process. The trick of the trade is enclosed in the separation after heating up. ‘Technology is important, but it is not the ultimate goal. I remain focussed on the economics. What are the process costs, the costs for maintenance, and the price of biomass? Where a central installation is concerned, biomass has to be obtained within a radius of one hundred kilometres. Otherwise, the logistic costs would be too high. Moreover, such facilities have to deal with factors that force up the prices, because supply is limited by definition. Therefore, to help achieve local energy objectives or reuse raw materials, it is important to make use of a technology whereby other types of biomass can be pyrolysed as well, such as manure, paper sludge, or certain varieties of miscanthus, a type of grass. Each case has to be carefully calculated.’

Nettenergy is broadening the business model behind mobile pyrolysis on the output end as well as on the input end. As mentioned above, it had been Vasbinder’s approach to become self-sufficient where renewable energy was concerned. However, the by-products prove to have great chemical and agricultural potential, explains Vasbinder.

Thanks to the fractionation step, the mobile pyrolysis installation also generates raw wood vinegar, which is a water fraction rich in carboxylic acids. Its water content is high: between 80 and 90 percent. The remaining part comprises formic acid and acetic acid (approximately 8 percent), acetol (2 percent) and phenolic components (10 percent).

According to Vasbinder, wood vinegar, or acetum pyrolignosum, has various routes to the market, including liquid smoke for the meat-processing industry, pesticides (already applied in Asia, ed.), green road salt, and as an acidifier of manure against ammonia emission and stench.
Biochar is being studied for its features as a soil improver and carbon filter.

At first, Vasbinder considered his business model to lie purely in the PyroFlash technology, or, rather, the building and selling of installations. As he continued his studies to upgrade resources and products, he pushed his scope further up the value chain.

At the end of 2013, this exercise was given concrete forms, when Nettenergy and Nimaro Ageno Consult were awarded a Dutch subsidy to stimulate small and medium-sized entrepreneurs in top sectors, MIT (MKB-innovatiestimulering Topsectoren).

These two parties joined forces on the Green Chemistry Campus in Bergen op Zoom, the Netherlands. Henri Gruenbauer (Nimaro Ageno): ‘On a laboratory scale, we want to demonstrate that we are able to further de-acidify the pyrolysis oil and purify and upgrade the raw wood vinegar and turn these into end products. In addition, we want to see how we can keep the process and conversion costs competitive.’

Pilot plant in the planning

So far, we can see no technological obstructions, says Gruenbauer. ‘We work exclusively with proven technologies that are easily scaled up. It is more a matter of selecting the right end products and looking for customers in the market. We are currently in negotiation with potential customers concerning a number of products. Which ones? I will not name any names, but we are observing opportunities in the short term, whereby pyrolysis oil is converted into several substances, including fuel oil, a shipping fuel, a coating, an alternative to creosote, and calcium magnesium acetate. The latter product is already on the market and is used as a more environmentally-friendly alternative to regular road salt, which also leads to less corrosion.’

The partners have made quite some headway in that they intend to set up a pilot plant to scale up the production of semimanufactures. ‘Together with REWIN, we are currently getting the financing arranged within the OP-Zuid arrangement. The current process, which is co-funded via MIT, will be concluded at the end of this year. Scaling up will take over a year and a half, after which it will be full steam ahead towards a commercial plant.’ 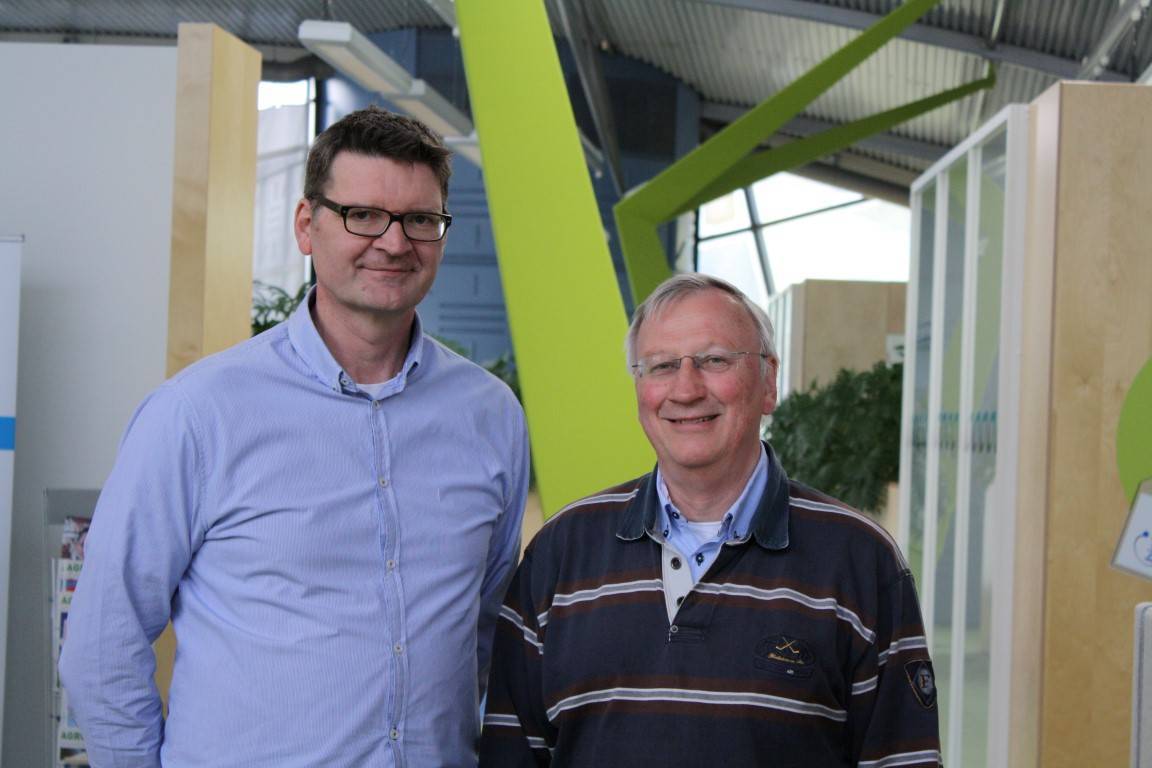 Rob Vasbinder (left) and Henri Gruenbauer on the Green Chemistry Campus, where the two are working on the de-acidification of pyrolysis oil, among other things.

‘Europe not the lost continent’

Focus on biobased chemicals and materials

Ghent is the birthplace of bioenergy production in Belgium. No less than 90% of all biofuels…